I’ve played a lot of Final Fantasy games. Regrettably I’ve only beaten a handful – I, II, III, VII, IX, X and now XV. I was certainly looking forward to XV though I went into it with no small amount of apprehension; obviously I knew about its troubled and lengthy development and about the fact that it looked so different to other, much beloved, entries in the series. Would it manage to live up to VII’s exploration of mental health, X’s bittersweet journey or even the brilliant struggles with identity and mortality that made IX by far the best entry in the franchise?

Well, in the end it was pretty damn good. 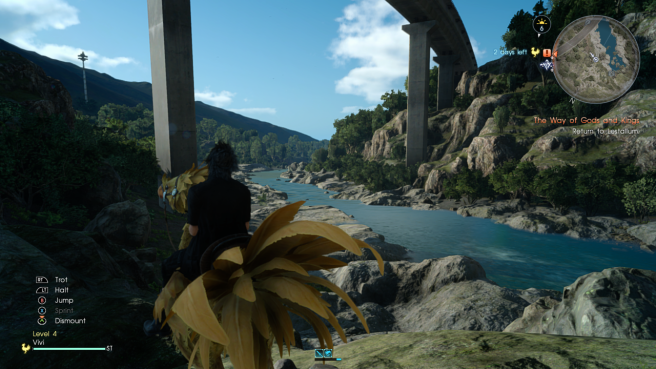 Like the majority of entries in the franchise, FFXV is a standalone story; the game itself opens up with a screen exclaiming its position as a game for “fans and first-timers alike” and it’s a fair assessment. Although it features elements familiar to long-time Final Fantasy aficionados, there are a plethora of changes from previous entries that work to make it a more accessible experience to those new to the franchise. In FFXV we play as Noctis, the prince of the kingdom of Lucis. There’s an evil empire, Niflheim, and a war over control of a crystal. So far so standard. As the game begins, Noctis sets forth from his home city to marry his fiancée, Lunafreya; joining him are his royal bodyguards: Gladiolus, a hulking and terse warrior, Ignis, a cerebral fussing tactician, and Prompto, an excitable gunman. Together the four of them pile into Noctis’ royal car, the Regalia, and set out on one last big road trip on the way to meeting Lunafreya. Unfortunately, as Noctis leaves the Niflheim empire invades, destroying his home and forcing his journey to turn into one of salvation as he fights to save his home.

Firstly, FFXV looks and sounds breathtaking. The main and secondary characters sport great models (as does the sleek and shining Regalia) but that care was extended to much of the random NPCs as well. The world around Noctis brims with tiny details and whether you’re running through the verdant grasslands of Duscae or the tight streets of Lestallum and Altissia you find your eye being drawn left and right by the exquisitely crafted world. It is worth saying that although the land of Eos is built so you can spend much of your time staring out at the stunning vistas, it can feel a little empty at times – there’s plenty to do, sure, but not much to find outside of quest events and dungeons.

The soundtrack is equally arresting. The original score, composed by Yoko Shimomura (Kingdom Hearts, Street Fighter II), features a marvellous grasp of melody underpinned by a bombastic arrangement though it is the quieter, melancholic songs that captured my attention most – themes like Somnus and Noctis’ Theme are equal parts stirring and heartrending, while the entire game is bookended by a powerful cover of Stand By Me by Florence + the Machine. It would be remiss of me to not mention the voice acting as well – though most of it is solid, fittingly it is the central quartet who do the most with their characters and lines, delivering some of the most emotionally-charged dialogue with a real sense of weight. 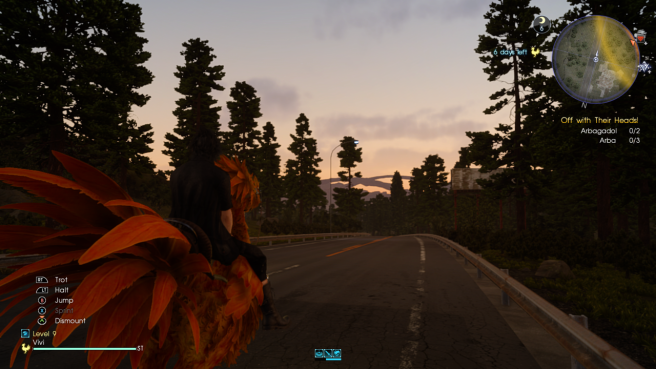 The meat of the gameplay is in the combat. Unlike some previous entries, FFXV opts for an entirely real-time combat system rather than the turn-based systems of games past. Fighting is deceptively simple – you run into enemies in the world and hold down a button to begin attacking. You can sort of direct Noctis’ combos by moving the analog sticks but mostly you’ll begin by simply holding attack and letting the game do its thing. However, as you play the combat begins to acquire a little more depth; you quickly realise that timing dodges, blocks and parries are key to dealing proper damage against most enemies and while Noctis’ long-range warp strike at first seems only mildly useful it soon becomes apparent that it’s the key to beginning some of the most powerful combos in the game when used correctly. By levelling up your party you can acquire new abilities for them to use in combat – Gladio’s tend to be high damage strikes or defensive blocks, Ignis specialises in buffs and exploiting elemental weaknesses and Prompto uses attacks with a high critical-hit chance and status ailments. Noctis is the most versatile as he can equip any weapon, allowing the player a space to experiment with weapon setups and allowing you to prepare for any enemy type.

Magic is treated a little differently than in other Final Fantasy games – for a start, only the 3 primary elemental spells (Fire, Blizzard and Thunder) are available. Additionally, magic must be crafted before it can be equipped – while this sounds tedious, the crafting system allows for some very interesting magic to be concocted as you combine elemental energy with various items to create wild variations on the original spell. Spells are far more destructive than in previous games as well – each hits over a large area of effect and can damage the party just as easily as it obliterates their enemies, effectively creating the sense that magic is a dangerous but powerful force in a way that’s never been as apparent in the series before. Summons are similarly catastrophic; in previous games they’ve always been figured as some form of powerful pseudo-deities but in FFXV they’re literal gods, appearing at random and towering over the world before raining doom on the hapless enemies below. The summon sequences are phenomenal, an utter joy to experience, and I found I spent time trying to trigger all the summons just to see how they looked. The fact that triggering the summons is semi-random is somewhat of an issue but I can’t say I ever found myself needing to rely on them; additionally the summons are all featured in the main story so at the very least you can’t miss them though it’s a shame that there doesn’t seem to be any summons to explore and find as in some previous Final Fantasy games. 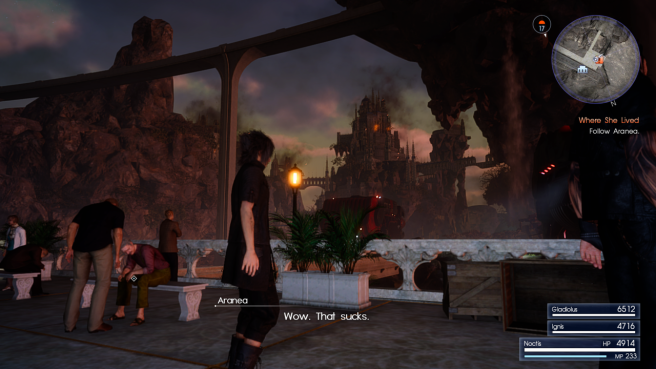 Like any RPG worth its salt, much of your time is spent on quests. As you progress through the game the world opens up for you to explore both in and out of the Regalia and to go with that are a ton of sidequests. While some do fall into the trap of simply sending you running back and forth between a couple of spots, thankfully a lot of them focus on combat and exploration. The monster-hunting quests are a particular favourite of mine, though there are other things available to sink your time into: you can gather ingredients to expand your options when Ignis cooks his stat-boosting meals, you can take photos with Prompto and there’s a very well-fleshed out fishing minigame that begins with Noctis pleasingly summoning his fishing rod with the same gusto that he conjures swords from thin air. On top of that are a number of dungeons hidden throughout the world and these are where the game shines most; some of the best-looking locales and engaging combat encounters come in the bonus dungeons and seeking them out is yet another major timesink.

The biggest strength of the game though, for me, was its character writing. To be honest, I was expecting to dislike the party at first as they all seemed to fall into trite stereotypes; Noctis was the spoiled noble, Gladio the gruff honour-bound fighter, Ignis the fussy intellectual, and Prompto the annoying squeaking oh-so-hyperactive child. It’s a testament to the quality of the writing that this didn’t last long at all. In a few short hours I’d all but fallen in love with the group; because so much of the game is focused on them they receive excellent development as the game constantly concerns itself with the effects the narrative has on them; besides that they constantly chatter and banter with each other in a way I could only find to be hugely endearing. With respect to the core party, it’s an absolute masterclass in character writing – the quartet have constant and wonderful interactions that kept me invested for the entire playthrough. As far as I’m concerned it should be held up as a standard for character writing alongside stuff like Mass Effect and The Last of Us. That said, though considerable effort was expounded on them, it comes at a price as much of the supporting cast is a touch bland. There are exceptions, particularly the main villain, who gleefully hams it up as they torment the party, but that’s more or less it. Some of the more prominent secondary characters are fine, certainly, but don’t get a lot of space to develop. Worse still, as the story advances almost all of them bar the main villain are dropped entirely as the focus shifts to a faster-paced narrative with a darker tone for the final act.

This shift marks one of the main complaints I have about the game. For about 40 to 50 hours of my playtime I was allowed to roam freely around the world, completing quests as Noctis and co. try desperately to stave off facing the oncoming threat of Niflheim but as the second act comes to an end, so to does that freedom. From then on, the plot lurches forward at a breakneck pace and the tone takes a turn for the grim, culminating in a lengthy chapter that tries to emulate a horror feel (though with only moderate success I’d say) before the grand finale. It’s a jarring tonal shift from the carefree roaming of the earlier game and although I don’t hate it by any means, it certainly feels a little less polished and well-crafted than the rest of the game. That, coupled with the aforementioned largely lifeless supporting cast, could come as a source of frustration to players, as could the lengthy free-roaming sections. Still, they certainly didn’t bother me that much. 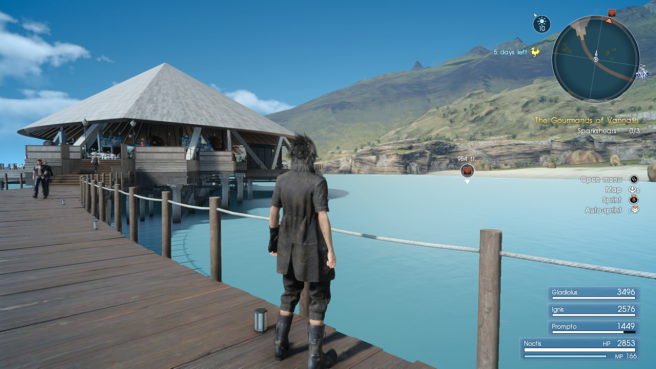 In short, I adored Final Fantasy XV. It surprised me at every turn; the characters were more likeable than I thought they would be, the combat was more engaging than I expected and the world was far more lively and exciting than I anticipated. It kept me invested for over 60 hours of playtime and despite its faults I found myself more and more drawn into the plight of Noctis and his friends to the point where I freely admit to blubbing during the beautiful ending sequence. Final Fantasy XV was a sheer joy to play and I would highly recommend it to anyone.