The Nazis are really bad. There you go, that’s the central premise of the Wolfenstein series of video games. It’s not revolutionary as far as ideas go, but at least it’s simple and makes sense. The Nazis are bad and you have to shoot the crap out of them. Sure, there’s some extra stuff in there too; the famous image of the giant, power-armoured, quad gatling gun-wielding Mecha Hitler from Wolfenstein 3D tells us that perhaps this isn’t just a run-of-the-mill World War II shooter. From mechs to magic, the franchise has featured a glut of weird and wacky weapons that the Nazis have utilised as they try to stop series mainstay William “BJ” Blazkowicz’s one-man war against them.

In The New Order their trick is simple. Just win the war.

It’s July. The Allies are leading a great and mighty offensive against a German fortress held by longtime Wolfenstein villain General Wilhelm “Deathshead” Strasse. The year? 1946. Oh, and the Allies are losing, badly. In fact, this attack is a last-ditch effort to try and turn the tide against the all-powerful Nazi war machine. At the forefront is BJ Blazkowicz and a team of Allied soldiers, who manage to infiltrate the fortress and wreak havoc. Things are looking promising before they fall into a trap laid by Deathshead. Though Blazkowicz escapes, he suffers a massive head injury and falls into a coma.

Fourteen years later, Blazkowicz reawakens. It’s 1960, he’s in a Polish asylum and the family that has been caring for him has just been gruesomely murdered, along with the rest of the patients. He’s got a scalpel, a grudge and there’s a Nazi officer looming over him ready to pull the trigger. Take a wild guess what happens.

The world which MachineGames has built for Wolfenstein: The New Order is certainly an interesting one. By 1960 the Nazis have control over around 75% of the world; concentration camps are the norm, New York has been nuked to bring the USA under control and everywhere the Nazis go they tear apart the indigenous cultures, erasing any trace of non-Nazi individuality from the world. Though things are exceptionally bleak, there are still pockets of resistance and Blazkowicz naturally becomes a part of it. His journey to kill Deathshead takes him across Europe, from Berlin to London as well as to a few unexpected locations.

In general the world is very good looking; from the harsh, grey, unforgiving concrete of Nazi cities to the lush and extravagant offices of the elite officers MachineGames have done a fantastic job of highlighting the disparity and barbarity of Nazi control. That said, almost every level takes place ‘in’ somewhere; that is, in a base or a building – in short, somewhere confined. It’s not that levels are reduced to corridor shooters but it feels like a missed opportunity to see the wider world and the effect the Nazi regime has had on it – for example, we get a level set in London but all we see is the interior of one tower building. There’s plenty of world-building done to try and convey the extent to which the world is screwed but we don’t really get to see much of it in game. 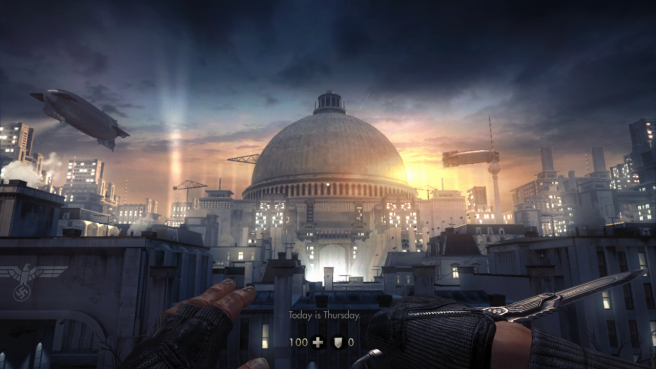 In fairness however, The New Order is in some respects a character drama at heart. Sure it’s about shooting Nazis and wants us to know that the world is ruined but throughout the game that’s communicated through the dialogue and the acting of the core cast – incidentally, the voice acting in this game is superb, with much of the cast selling their roles brilliantly. Even Brian Bloom, who delivers all of Blazkowicz’s lines in a whispered growl, manages to impart a great deal of humanity into the hero; this is helped by the excellent dialogue which delves into the damning psychological effects a lifetime of war has had on Blazkowicz, elevating him far above the generic action hero you might expect him to be.

Additionally, the soundtrack is awesome. Composed by Mick Gordon (Killer Instinct 2013 before this, Doom & Prey since) it features a sparkling array of instrumentation. Filthy distorted guitars, punchy drums and eerie leads and synths give life to action sections and the fantastic main theme, bluesy riffs segue into melancholic acoustic sections during quieter moments (The Kreisau Circle, Ransacked) and terrifying electronic growls and screams merge with screeching industrial noises to create evil soundscapes for the principal villains (Deathshead, Frau Engel).

There’s also a set of in-universe “licensed” songs; throughout the game you can find collectible vinyls featuring classic pop songs reworked in German and rearranged with new instrumentation to sound like the bands we know had reinvented themselves in order to appease their new Nazi overlords. The standout is House of the Rising Sun though there are plenty of others; more than anything it’s a lovely little touch to add to the world that has been built for The New Order as well as a reward for exploration.

Indeed, exploration is something that the game encourages. I said before that the game isn’t reduced to a corridor shooter; instead the levels are usually quite expansive and often feature multiple paths to take and plenty of secrets to find, from the aforementioned vinyls to weapon, armour and health upgrades. Often exploration results more world-building stuff, such as diary entries and newspaper cuttings, which is a fine reward in and of itself. In keeping with that theme, the game is particularly fond of giving players a number of different ways to take on combat encounters. Though players have the choice to burst in and blow up every Nazi in front of them (a perfectly valid strategy at all times), stealth is also an option; if Blazkowicz can silently take down the Nazi commanders in an area it reduces any chance of reinforcements coming in. On higher difficulties, that kind of advantage is vital; I might not be great at first-person shooters but even so this game has some vicious difficulty spikes that left me frustrated more than once as suddenly the game became disgustingly hard.

Alongside exploring the levels, the game also encourages multiple playthroughs; a decision made early on by Blazkowicz has a knock-on effect later on in the game, changing some of the characters he meets as well as altering some of the paths he can take through the levels. It must be said though that it’s not really worth it; in essence the changes are negligible and it felt like they’re mostly there for enthusiasts. If you want more of MachineGames’ top-notch character development with a slightly different cast, then by all means play the game twice.

Looking past all that, at its heart the game is an unashamedly old-fashioned first-person shooter. Blazkowicz has a decent range of guns, almost all of which can be dual-wielded for greater damage at the cost of reload time and accuracy (it does look way cooler though). His arsenal all pack a hefty punch, with a great sense of weight behind your shots and there’s something infinitely satisfying about any gun in an FPS that makes enemies explode into a shower of gibs. Combat moves at a fast-pace, with the player encouraged to overcharge their health and run into fights knowing they’ll take damage but tapping into Blazowicz’s uncaring rage to not give a shit; you can always hoover up health and armour refills afterwards.

That old-school sensibility is what drew me into the game; the excellent character writing and wonderfully bleak world kept me invested. I wouldn’t say I love Wolfenstein: The New Order; I’d liked to have seen more of the world on offer, I’d liked an even bigger, zanier variety of weaponry, I’d have liked a slightly more even difficulty curve. None of those gripes stifled the experience however. For someone who doesn’t really play many shooters I’m perhaps not qualified to tell you if The New Order is a good FPS; what I do know for certain is that it was a tense, exciting, fast-paced action game that I had a hell of a time with.