“You keep surprising me, Daud. Are you hoping it will change the way things will work out? Maybe; maybe not. The song’s almost over. And when the music stops, we all fall down.” And so we come to the end of Dishonored. The Brigmore Witches is the final piece of DLC for Arkane’s stealth game and concludes the story begun in The Knife of Dunwall. Daud has tracked down the witch Delilah to a mansion outside of the city; to reach her he decides to enlist the dreaded gang leader Lizzy Stride and use her ship to travel upriver to Brigmore. There’s a small hitch; Stride is being held deep in Coldridge Prison which is in strict lockdown after Corvo’s escape and her gang is embroiled in a bitter turf war. In amongst all this stalk the titular Brigmore Witches, enigmatic sorceresses that use powers much like Daud and his assassins.

There’s little to be said about the gameplay that I haven’t said already. The tradition is well established now; Daud can sneak or slaughter his way through a set of massive open-ended levels that contain multiple paths to explore and lots of hidden ammo, coins and collectibles to hoover up. Players get access to a new piece of equipment and a new power; baffle dust is, like the previous DLC’s chokedust, another grenade to allow more aggressive Low Chaos play, confusing enemies into forgetting what they’d seen, while the new power Pull allows Daud to grab runes and enemies from afar and hold them in midair. They’re nice additions but in all likelihood I’ve always found myself already well settled into a particular playstyle and not in any great need of changing my powers.

That’s not to say The Brigmore Witches is disappointing though. Even if it was just more Dishonored, that would be completely fine by me and this DLC continues Arkane’s record of providing fantastically absorbing gameplay. However, Brigmore is a little more ambitious than just that; while it is more Dishonored, Brigmore goes out of its way to deliver an extra challenge to seasoned players and features what is by far the most impressive level yet seen in the entire franchise.

The challenge mostly comes in the form of the crammed levels. More than ever players are encouraged to be vigilant as enemies are scattered liberally about the stages and like the estate in the previous DLC, often Daud’s hiding places are not as secure as you might like. It encourages mobility and paranoia in players, no mean feat when you consider how hideously overpowered Daud is. Additionally the DLC gives us new enemies in the witches; because of their powers they can easily kill players who struggle in combat and offer even experienced players a new enemy type to learn and react to. 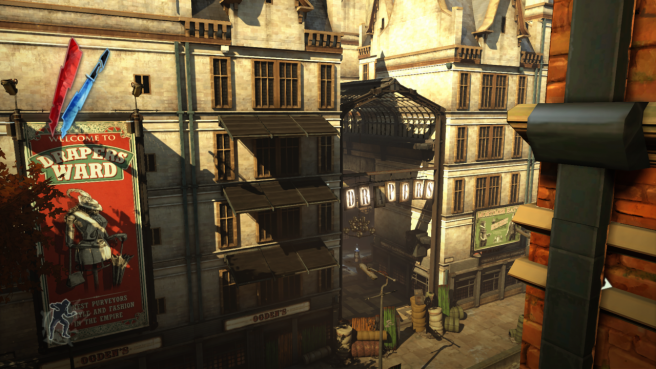 Without a doubt, the levels are the star of the show here. Coldridge Prison at first seems a rehash of Dishonored’s first level but really it’s more of a refresh; unlike Corvo, Daud has his powers here and players are allowed to explore the stage in a new way. The prison itself however has been widely expanded, to the point where it really has become an entirely new level; it’s a cramped, claustrophobic and severe environment and once you’re past the initial defences unfolds into an open-plan area lined with plenty of cells and very little in the way of hiding spots, especially as the inmates are more than happy to scream for the guards should Daud stop and linger in their line of sight. The third and final level has a similar setup, requiring players to work their way through a tight enclosed level brimming with the game’s most difficult enemies. The real centrepiece is the second level, though. It takes place over a set of vast open city streets, centred around a river that divides two gangs locked in a bloody turf war. Daud can explore both of their respective hideouts, as well as the extensive sewer network that runs beneath the entire stage. It is easily one of the most expansive levels in the series, offering a tonne of stuff to find as you skulk around as well as offering a range of ways to resolve the conflict. Frankly, it alone makes the DLC worth playing.

To top it all off, the characters are brilliantly realised. Michael Madsen’s performance as Daud is at his gritty peak here but he’s supported by excellent showings from the rest of the cast. Erin Cottrell’s Delilah is a standout as she hams it up magnificently, booming out the witch’s spells with grandiose aplomb, while we see Billy Lush’s Outsider in a new light as he sneers at Daud with unhinged contempt and a cruel and malicious dispassion. This is particularly evident in a High Chaos playthrough and makes the added difficulty all the more worth it.

The Brigmore Witches is superb. Before going into it I had a hankering for more Dishonored; in that it delivers. More importantly it delivers not just a marvellous set of levels to toy about in, but also a decent challenge for returning players and an immensely satisfying conclusion to Daud’s story. It ties in neatly with the main game for a pleasant bonus as well. It speaks volumes about the effort and love poured into the franchise by Arkane that these two pieces of DLC are of such impressive quality and I thoroughly recommend them both. 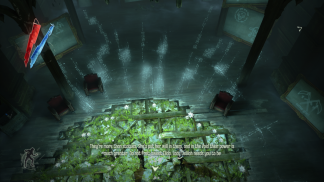