As I’m sure is abundantly clear at this point, I’m a sucker for an Assassin’s Creed game. It is also unlikely to be a surprise to learn how excited I was for Origins. Utterly bland subtitle aside, it seemed on paper to have everything it needed to get me all hyped up. Designed as a prequel to the entire series, it’s set far before any other entries, in 47 BCE Egypt, poised between the memories and ruins of the Old Kingdom, the tightening grip of the Greek Ptolemaic dynasty and with the threat of Caesar’s Romans on the doorstep. How good can a Ubisoft game be though? And could it match the levels of love I have for II or Black Flag?

You better believe it can.

We are introduced to our new hero midway just as he finishes up murdering someone. Bayek of Siwa is extraordinarily violent, even by the standards of the franchise but he does have his reasons; his son, Khemu, was killed by a shadowy group of masked men and Bayek has vowed revenge. Family trauma is a pretty common motivation in this series but Bayek’s rings particularly strongly thanks in no small part to the excellent character writing; not since Ezio has Assassin’s Creed had a character I sympathized so powerfully. The strength comes from the expertly crafted juxtaposition between Bayek’s seething and extreme anger and the poignant slower moments when he is reminded of his child. The loss of family, it quickly becomes clear, is a part of daily life under the Ptolemaic rule; time and time again Bayek comes across families in similar situations, driving home the normality of the terrible act he suffers with and fueling his incredible rage.

Bayek does at least find some respite in Aya, his wife. Since Khemu’s murder both of them have since gone their separate ways in search of the men who killed him and at points their paths cross. It becomes an opportunity for Ubisoft’s writer to flex their dramatic muscles; Bayek and Aya’s passion reignite whenever they meet again and the fact that they clearly have a deep love for each other is a welcome intermission from the vicious quest they are both on. However, theirs is a tragic lot; Bayek learns that Aya has pledged her service to the usurped Pharaoh Cleopatra and is helping her to regain her throne. This drives a wedge between the two, creating a gap that slowly and inexorably widens as the story progresses; the moments when they forget it and are allowed to be the simple happy couple are made all the sweeter by the unspoken awareness of how it is likely to all end.

With that out of the way, the main thrust of the story is a great deal more familiar. Cleopatra is at the head of a civil war in Egypt as she attempts to reclaim her throne from her brother, Ptolemy. She uses Bayek and Aya to cement her rule by employing them to rid the country of the Order of Ancients, a shadowy group of people who exert control over every aspect of Egypt and who are responsible for the death of Khemu. Although the overarching plot is nothing to write home about, again it’s the character moments that help it to shine as each member of the Order gets a moment or two in the spotlight. 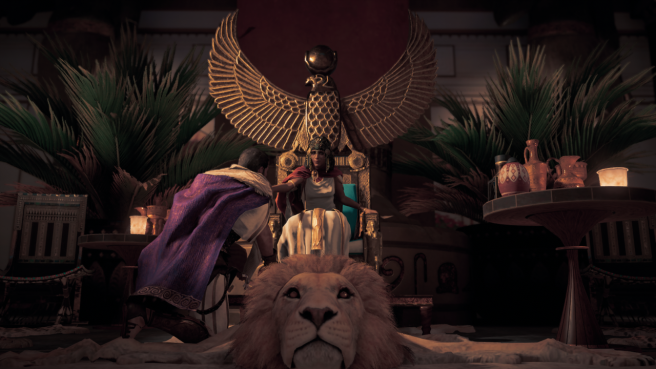 Assassin’s Creed: Origins features the usual mix of stealth, platforming and combat, while the light RPG elements that were introduced in Unity and Syndicate have been expanded. Origins now includes a full tiered loot system with items and arms ranked from Common to Legendary; weapons and gear can be crafted, and completing missions and overworld locations gives XP and level ups earn ability points to spend on abilities across 3 distinct skill trees that develop Bayek’s skills with bows, melee weapons and tools respectively.

Side quests are another sign of Origins’ RPG influences. Each region in Egypt has its own set of side quests to complete, often fitting into a self-contained mini storyline that typically has Bayek assisting a group trying to fight the oppression of whatever body has power, whether that’s members of the Order of Ancients, or simply the Greek or Roman armies exerting pressure on the locals. Thankfully they’re another example of Ubisoft’s improvement as the quests are usually engaging and more than fulfilling a brief checklist with strong questline writing to back them up. As is normal for the series by now, the biggest change in Origins’ gameplay is reserved for the combat. Once more the fighting has been entirely revamped and has been moved even further away from the defensive, waiting-to-counter-kill roots of the earlier titles. Instead it takes its cues from Dark Souls, or if you prefer, from Ocarina of Time. Enemies can now be targeted as Bayek mixes up light and heavy attacks to break shields and deal damage; Bayek can also smoothly dodge around enemy attacks to find an opening. You have access to a range of melee weapon types, from regular swords to spears, sceptres and khopesh as well as a variety of bow types, from your bog-standard bow to predator, hunter, and light bows (read: sniper bows, shotgun bows, and machine gun bows, yes really).

For what is nominally a stealth game, Origins is thankfully free of enforced stealth sections. Instead you are always given the option to engage in stealth, from using Bayek’s trusty eagle Senu to scout out the terrain and mark enemies from above, to disabling reinforcement torches, sneaking through dense undergrowth and even distracting guards with a well-placed torch and a reed hut. If it all goes wrong though, the game never slaps you on the wrist; Bayek is just as comfortable in open combat and the option is always there to simply take on every enemy as loudly as possible and entirely eschew stealth. Gone are the missions where you have to be unnoticed lest you fail; indeed gone are all the old bugbears, such as tailing events or most of the prescriptive over-the-top cinematic sequences. The focus is squarely on emergent gameplay and Origins is infinitely improved by it.

Even Aya gets in on the action. Though Bayek can sail any of the dinky reed boats he finds up and down the mighty Nile, Aya gets a couple of missions that place her in command of a Greek trireme. These sailing missions work similarly to those of III, Black Flag and Rogue, as you attempt to maneuver your ship into the best position to let loose a volley of flaming arrows to burn an enemy fleet to the bottom of the sea. These sequences are nice enough but there’s not many of them – around 4 – and they simply aren’t as fun as the high-seas piratical nonsense of Black Flag. Regardless of the decent quality, you can’t but feel that they were shoehorned in.

Origins is by far the finest looking game in the franchise, and as of right now one of the best looking games I’ve had the fortune to play. You might question how it’s possible that deserts can look good but believe me, they do; it’s not all just vast stretches of orangey-brown sand. There are regions that are just that, like the Great Sand Sea, but even they manage to look gorgeous thanks to the shifting sand and rolling dunes. Equally you’ll find yourself trudging through bleak blackened mountains as you slowly scrabble up the side of vast canyons, and slowly picking a path through bleached white rocks, desperate for a sight of that precious circle of blue oasis glimpsed for a second as you crested a hill.

It’s not all deserts, of course. Bayek’s journey starts in the beautiful oasis of Siwa, where we are first introduced to a wide range of environments, from the town of dusty huts haphazardly clustered together around a small lake that still teems with life as boats pass back and forth across it to the towering and lush Temple of Amun that stands as a centrepiece amidst the village. We even start the game in a long-forgotten tomb, piled high with gold and gifts for the afterlife as Bayek clambers up derelict statues, muttering apologies and prayers for forgiveness to both the Gods and the owner of the crypt.

It only gets bigger from there. As you journey across Egypt you’ll wander through the prodigious capital of Alexandria in its heyday, walk the plague-ridden streets of Memphis and can even travel out West to Cyrene, the seat of Roman civilisation in North Africa nestled in the verdant hills of the Green Mountains. There’s an immense number of settlements and locales to discover, each with its own distinct identity that I found fuelled the need to explore; Ubisoft Montreal have done more than simply throw together an open-world and call it a day – they’ve constructed an exquisitely detailed and living world that demands to be beheld.

As if that’s not enough, the music is exceptionally good. Sarah Schachner has composed one of the finest AAA soundtracks in recent years, drawing from a mixture of influences. There’s the usual film-inspired cinematic score but it’s mixed with traditional Egyptian folk elements and, surprisingly, 80s-style delay-drenched synths (The Tongueless Land, Main Theme). Some tracks are built around the franchise’s recurring theme (Ezio’s Family) while Bayek of Siwa features a brief leitmotif that appears at key moments in gameplay (Fire in the Duat, Moonlight on the Nile). As you plod across vast and unceasing deserts the music quickly draws back, first to the occasional lengthy draw across a cello string or a tense abyssal piano chord before withdrawing completely, leaving Bayek alone with the howling sands and the echoing, hallucinated sounds of a mind wandering and overheating in the oppressive heat (The Shimmering Sands, Desert Delirium). In combat, the drums rear up in primal rhythms, pounding to rapid beats and enticing you into more dangerous situations (The Battle of Krokodilopolis, Legions of Blood, The Hyena’s Fire).

This waffle has gone on long enough. The bottom line is that Assassin’s Creed: Origins is exceptionally good; in fact it ought to be mentioned in the same breath as II and Black Flag when talking about the best entries in the franchise. Bayek’s story is exciting and touching in equal measures. The core gameplay has never been more engaging. Egypt is utterly stunning; I’ve spent over 70 hours on Origins currently and an awful lot of it has been me gawping at Ubisoft’s world. I know the series has a reputation of being a stale repetition and indeed all Ubisoft games are broadly the same but Origins is a damn fine example of the Ubisoft game. Highly recommended.

7/7 – TOP TIER. As close to perfect as it gets, a game that surpasses any faults it might have and comes with the highest of recommendations. A must-play.