Quick question: what comes to mind when I say “walking simulator?” Some lengthy linear nonsense where you trudge around listening to a voice over? No player agency whatsoever? Barely anything that could charitably be called gameplay? The genre seems to be a much-maligned one thanks to these preconceptions but thankfully there’s always something that comes along to challenge your mindset. Firewatch is one such game.

Like so many great stories, Firewatch starts with a tragedy. Henry, our hero, meets Julia at a bar. They fall in love, talk about children, adopt a dog. Their life isn’t without difficulties, but it seems good. Though tough choices fall before them and they aren’t always sure that they made the right ones, the couple muddle through.

In her early 40s, Julia is diagnosed with early-onset dementia. She deteriorates quickly and quickly ends up in the care of her family, in Melbourne, Australia. Henry, already not on best terms with his in-laws, is left adrift and lost in America. Faced with the insurmountable and unyielding misery of the situation, he makes another choice. Henry runs away.

He finally makes his way to rural Wyoming, to the Shoshone National Forest. There, he signs up to become a fire lookout. For Henry, this is his escape. In his lonely tower, he is isolated from the world. All he has is some hiking gear, a typewriter, and his memories of his wife. And then there’s Delilah.

Delilah is Henry’s supervisor. Brash, irreverent, and friendly, she is Henry’s only company. From her own lookout tower, the two keep in contact via walkie-talkie, providing a constant back-and-forth that annoys and charms Henry in equal measure. Herein lies one of Firewatch’s finest points in favour. The dialogue is fantastic. In many respects the focal point of the game, Henry and Delilah’s constant conversations are expertly crafted. Henry can radio in and chat to Delilah about almost anything he finds or sees in the world, often provoking silly banter that bats between them. The conversations come regularly but not constant enough to be a source of frustration; instead Firewatch has a smart sense of when to allow silence to reign. Occasionally the silence is allowed to extend a little longer, where it is used to great effect to evoke emotion in the player, from drinking in the settled calm of the park at peace to stretching out moments of tension. 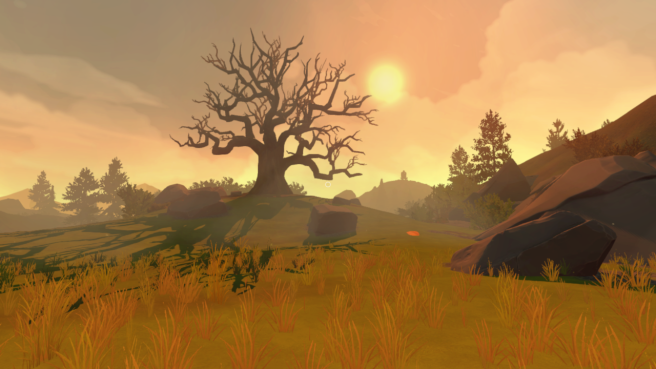 The park itself is a wonder. Firewatch employs a glorious style; Henry is kind of blocky, almost like a World of Warcraft-style cartoony caricature and it lends him a sense of weight in the world as he scrambles up rock faces or rappels down sheer cliffs. The actual park itself is similarly chunky and presented in deeply saturated tones, providing some stunning visuals and honestly breathtaking bits of scenery. It is very easy to simply start wandering through the forest, taking in the sights and it seems Campo Santo were well aware of how beautiful their game is as not only is wandering happily allowed but there is also a free-roam mode included so Henry can wander free of the confines of the plot.

And believe me when I say you’ll want to wander. Plenty of these walking-sim type games will have documents to collect in order to fill in the story but Firewatch is blessedly light on these. There are certainly some to find but they tend towards adding colour to the world rather than explaining any of the plot; the bigger draw instead is finding more things to report back to Delilah and more than once I found myself scouring the land just for something new so I had an excuse to strike up a new conversation with her.

There are some very light platforming elements to indulge in as of course the national park isn’t some flattened wasteland. Instead you find yourself clambering up ledges, slowly ascending rock walls, and seeking out anchor points to rappel from. Firewatch also eschews modern open-world mainstays like map markers; once you’re given an objective you’re left to find it yourself armed only with a map of the park and a compass. I wholly approve of the diegetic elements; it gives the world a wonderfully real feel and makes a game of the walking; a prudent idea since you spend the majority of your time doing it. The only small complaint is that the game defaults to showing your progress on the map, though you can turn the option off in the menu, something I definitely recommend doing for the most immersive experience possible.

The soundtrack is as arresting as the aesthetics. The text prologue is accompanied by this heart-wrenching theme that sees a melancholy piano slowly give way to reverberating guitars and a bright, far-off melody that recalls summer evenings; the two meld together perfectly, a succinct musical summary of Henry. This summer-y guitar theme runs throughout a number of other tracks but it’s never played completely straight, instead trying to evoke a range of emotions with each different song. Often there’s an element of tension injected into the music, such as Stay In Your Tower And Watch which uses the occasional awkward semitonal movement to suggest something untoward before the powerful and grungey bass confirms it. At its best the music blends elements of Americana and atmospheric, powerful country with a cinematic flair for uneasiness and mystery – the soundtrack as a whole is phenomenal and well worth your time to listen to.

One other thing that Firewatch does tremendously, and perhaps my favourite of its myriad points in favour, is the way it subverts our expectations as players. I know for some the movement of games into exploring more tricky and dare I say interesting themes is an unwelcome one but I personally love it. Walking simulators already tend to have negative preconceptions associated with the genre, presumably thanks to titles like Dear Esther where the interactivity is extremely limited, allowing the player only to walk and to listen to a constant stream of pretentious narration. In contrast, Firewatch does a grand job of eschewing the common complaints of the genre; we are allowed agency to explore the open world and the dialogue is presented in branching trees thus allowing players to shape Henry’s responses.

On top of that though is a genuinely thoughtful message embedded into Firewatch about game narrative, protagonist importance, and our own expectations going in as players used to power-fantasies. To say any more runs the risk of spoilers and I’ve no wish to do that; instead I’d simply recommend you play Firewatch for yourself. As far as narrative games go, it’s a real triumph. 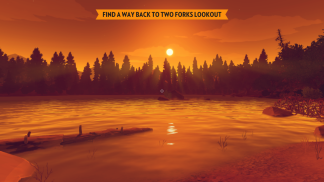