And so we come to the end of my time with Assassin’s Creed: Origins. The Curse of the  Pharaohs is the final major piece of DLC for Ubisoft’s adventure through Ptolemaic Egypt about one angry man and his love for stabbing lots and lots of people. Like The Hidden Ones before, it serves as an epilogue to Bayek’s travels. I could begin to talk about the minutiae, how it extends the level cap and racks up the difficulty, and dunks the players into the most hostile land available, with soldiers at every turn. I think, though, my words would be better spent recounting a few moments that struck me during the 20 or so hours I spent with The Curse of the Pharaohs.

We follow Bayek then, as he takes tentative steps down into a crumbling tomb of a long dead King of Egypt. Though this isn’t the first time he has done so, there’s a distinct air of trepidation about the old warrior now. Cobwebs flare up as his torch passes them, and on the edge of hearing there begins a whisper. Insidious and in a long dead dialect, they grow louder. As the sand beneath Bayek’s feet gives way to blackened waters, they grow louder. As obsidian statues of ancient Pharaohs inexorably grow and glare down at Bayek, they grow louder. And when Bayek finally comes to a tiny, glowing doorway deep in the tomb, they finally roar, crashing around his skull; he crosses the threshold and sees what lies beyond and the voices fall to an immediate, deafening silence.

The Curse of the Pharaohs (PC, PS4, Xbox One [reviewed])

The first afterlife. An unending sea of golden reeds stretch out, rippling serenely in the light summer breeze. Through the field, great ships sails, burnished prows scything through the grasses as reclining nobles gaze down upon the passing land. Alongside the triremes, herds of gazelle bound, their glossy coats reflecting in the sun; occasionally one disappears with a straining screech as a monolithic scorpion unfurls and lashes out with a massive, venomous stinger. Satisfied with its kill it stalks the grasses, ignoring the peasant souls that keep a wary distance while muttering prayers of thanks to Serqet. Small settlements of tranquility and decadence dot the landscape, bakeries and vineyards that provide libations to the mighty palace that towers above all else, a monument to the Lady of Grace, Nefertiti. Though statues of her stand across the landscape, looking over her subjects in her afterlife, it is her temple that serves as a reminder most of all, with priests and provincials alike prostrating themselves before her in worship.

The second afterlife. A colossal oasis sits amongst bleached-white desert sands, the waters of life lapping against the pure white limestone walls of the expansive palace that claims the lake. Here in the Aten, the sun is naturally the centrepiece. Hanging low over the throne, its rays spike down upon the palace-cum-temple, an unbreakable and never-decaying reminder to all that this is the afterlife of Akhenaten, Egypt’s Heretic King. Jackal-headed warriors of Anubis patrol the gleaming streets while the only the bravest and most foolish of souls that spend their eternity here dare to furtively covet the Old Gods of their home. Most however are content to fall to their knees and cry in prayer, basking in the dreaming rays of the renegade Sun God. 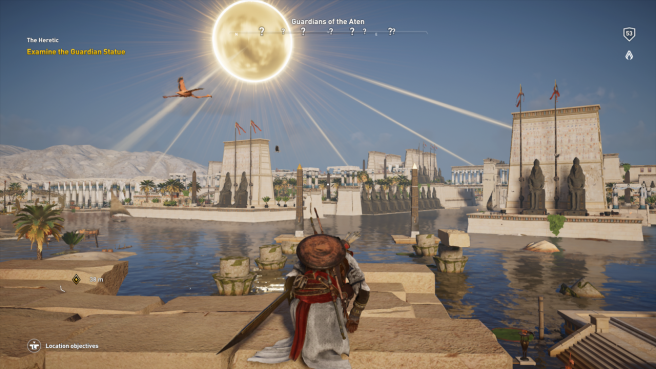 The third afterlife. Under a starry sky, the black waters of the Duat sit silently at the base of a craggy and morbid valley. The Boy King Tutankhamun stands immortalised, a titanic edifice transforming the young pharaoh who returned Egypt to the worship of Amun into an beloved warrior of faith. Ruined villages are scattered at the base of temples and altars to the pantheon, where souls work ceaselessly at funeral rites. The afterlife is an immense mausoleum, commemorating Ancient Egypt’s reverence of death. Huge indigo lotus flowers rise blooming from the lifeless rocks, closing their flowers away from any who stray near before unfurling with a sickly radiance once nearby threats have passed. Coiled through the valleys below is the skeleton of Apep, the serpent Devourer who Encircles the World, conquered and cast down by the resurgent saviour pharaoh.

The fourth afterlife. A blasted desert wasteland. Hellish scenes of battle and death are strewn amongst the sands, squatting under the stony gaze of an infinite scowling statues of Egypt’s greatest pharaoh, Ramesses II. Though this afterlife is the Heb Sed, a celebration of the continued reign of a king, this one seems to stand in opposition to the perception of its subject. He may be remembered as an incredible monarch, but for Ramesses the afterlife is a grim and war-like place in which his throne sits in a palace of naught but ruins and sandstorms.

It feels deeply anticlimactic to return to the world of the living after experiencing The Curse of the Pharaohs’ depiction of the Egyptian afterlife. Thebes bustles with activity and fear as the denizens struggle with the worry of the return of pharaohs long dead. Ramshackle fishing villages huddle on the banks of the Nile, struggling to cope with smugglers and grave-robbers alike peddling their ill-gotten gains, while the Necropolis built around the Valley of the Kings is overrun with soldiers and bandits plundering the tombs of pharaohs and nobles. It’s a decent-looking world, but that’s as standard for Assassin’s Creed: Origin; it’s also a far bigger world than the previous expansion, The Hidden Ones, though this does work against in some respects as the fast-travel points are few and far between and trudging across Thebes isn’t quite as engaging as Egypt in the base game.

Unfortunately, things are feeling a bit tired by now. The world events are exactly the same as before; it’s still fine to take on the forts and treasure caches but the drive and interest simply isn’t there anymore. Origins is already a massive game, and now 2 large expansions in, the game content can’t really hope to be as exciting as it was. There’s still some enjoyment to glean from the same old events, but it’s difficult to avoid that creeping sense of fatigue. 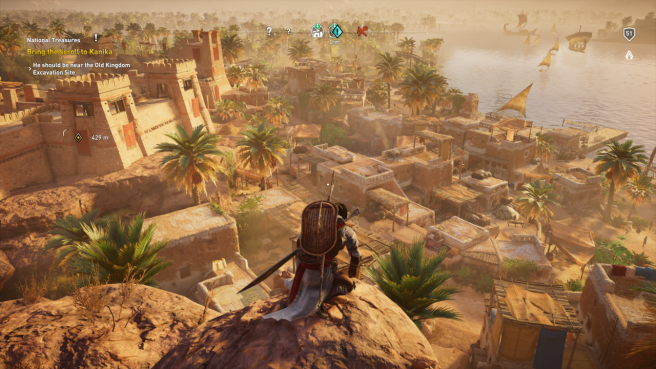 It definitely has some nice music at least. After The Hidden Ones recycled tracks, it was refreshing to hear a wholly new soundtrack composed for The Curse of the Pharaohs. It forsakes a lot of the synthy elements that I adored in Origins in favour of more folky material, but it works in very pleasantly. The keening violins in The Apple Has A Tale To Tell punctuate an otherwise decent battle theme, and echoes of franchise soundtrack mainstay Ezio’s Family can be heard in the serene Book of Breathings. The pulsing rhythms underpinned by a rasping electric guitar give At Ninth Gate a punchy weight; on the other hand some tracks eschew that in favour of far more prominent folk elements like KV5, or the Lady of the Two Lands, with the wailing vocals in the latter clearly drawing inspiration from soundtracks like The Witcher 3’s. Some, like Hour One, combine a droning low end and a simple picked riff to create a effective, minimalist, and deeply unnerving feel. Much of the soundtrack passes in almost a dream-like state, appropriately enough for a story so mystical, but that does mean it occasionally trends a touch too ambient at times for my taste and I find that tracks sometimes pass without leaving an impression.

Where The Curse of the Pharaohs does do well is in its approach to the Ancient Egyptian religion. The Assassin’s Creed franchise does have a few good examples of using its DLC as a vehicle for interesting what-if or bizarre story elements, from III’s alternate history of The Tyranny of King Washington to Unity’s ancient artifact shenanigans in Dead Kings. The Curse of the Pharaohs continues this tradition, with Bayek immediately suspecting a relic similar to the one that plagues him throughout Origins as being the source of the resurrecting pharaohs. The actual beats of the story are fine, but the writing shines during the sections where Bayek travels to the various stages of the afterlife in order to confront each pharaoh. There’s some attempt made to engage with Bayek’s internal struggle that he worries his work as a Hidden One has resulted in him dishonouring the Gods and forsaking his place in paradise, and both elements of the main quest and sidequests explore this turmoil. I’ve always maintained that the greatest strength of Origins has been its handling of Bayek as a character, and this DLC does its best to continue it. If nothing else, that’s a definitely point in its favour.

I don’t mean to sound overly critical. The Curse of the Pharaohs was a very fine time. It’s a solid and expansive DLC that does justify the otherwise relatively hefty price point (around £16/$20). Regrettably a lot of the world felt a chore to explore, but if it does it’s because it comes at the end of a lengthy game, and it does retain the level of quality from Origins. It certainly shines when you have the opportunity to explore the more mystical elements present in it, and that might well be enough of a draw to give it a go. 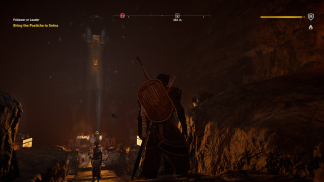