Mass Effect is a story about a hero and a chase, an exciting power-fantasy as Shepard tracks a traitorous villain across the galaxy. Mass Effect 2 takes on a far darker edge, overshadowed by the unavoidable sense of resignation that the mission to defeat the Collectors is suicidal. The move into more grim and serious territory is common to trilogies as they seek to establish a real atmosphere of weight and tension and Mass Effect is no exception. Mass Effect 3 takes things further still. It is a story about death, and loss, and the slow extinguishing of any faint glimmer of hope. 2 was dark but 3 is positively abyssal. 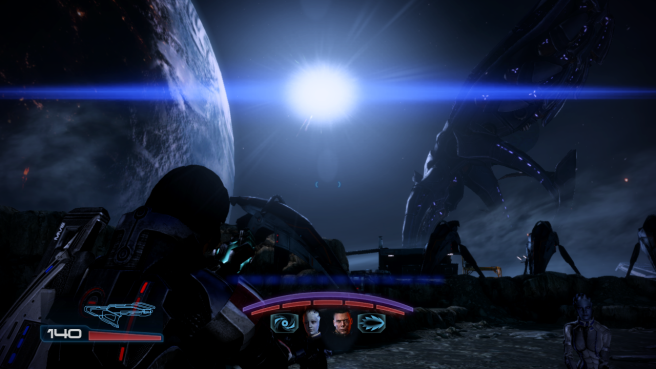 The Reapers are here. Mass Effect 3 lays its tone out clearly and from the very beginning. Shepard witnesses the devastating arrival of the Reapers on Earth as the vast and ancient bio-tech monsters begin their harvest of all advanced life in the galaxy. The Commander narrowly escapes aboard the Normandy, and is charged by what is left of the Alliance with gathering the various races of the Milky Way into a fleet larger and more mighty than the galaxy has ever known to take back Earth.

As is the case in the previous two games, the greatest strength of Mass Effect 3 is in the writing, its characters, and how masterfully Shepard’s world has been constructed (and in this case, how it is being torn apart). Shepard’s descent into desperation and depression as they realise they simply cannot save everyone, that they are watching the extinction of humanity, and that the galaxy has placed their entire hopes of survival on Shepard’s shoulders causes the normally unflappable Commander to crack in myriad little ways. The two-time saviour of the galaxy has been a stalwart and powerful force standing in the face of death but finally it begins to take its toll. 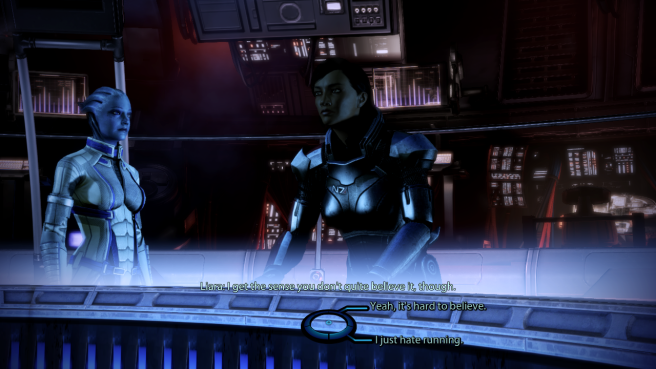 Depictions of heroes in depression are rare in games, and though Mass Effect 3 is neither the first nor the finest example of it (the repeated scenes of Shepard slowly running through a forest looking for a character that dies early on wears thin quickly, and is as subtle a metaphor as a brick to the temple) but that BioWare took the opportunity to try and properly humanise Shepard is admirable. By making them entirely vulnerable the stakes are raised in fantastic fashion; yes, the Commander ran the risk of death in previous games, but now we must watch our hero follow the slow, tumbling descent into self-doubt. Fear is the mind-killer, and for the first time, Shepard is so clearly afraid.

This extends to the wider cast as well. Potentially returning characters, such as Garrus, Liara, Tali, Wrex, and indeed any of the survivors of the previous games all get the spotlight as their respective species are dragged into the slaughter, as well as far more personal moments to show their own struggles with exactly the same worries that their Commander has. There is a stifling sense of selfishness that has infested the galaxy since the very first installment, and the Reaper’s harvest throws the futility and idiocy of it into sharp relief. Time and time again it is reiterated that co-operation is the only chance the Normandy has of taking on the Reapers, and as its crew come up against constant examples of races unwilling to help unless they secure their own interests, their exasperation becomes palpable.

This is perhaps why some of Mass Effect 3’s most perfect moments are almost all at either end of the emotional spectrum. There are points of acute hurt and tragedy, beats in the narrative, or in characters’ personal stories that sting so sharply. Often they’re drenched in bittersweet sentiment, and while I freely admit to being a weepy, romantic sort, this is one of those games that I personally hold up as masterful examples of those kind of moments. They’re not limited to simply major characters, either. A casual walk around the Citadel will always find a player overhearing tiny flashes of conversation; a soldier comforting his wife when he tells her they cannot communicate at all once he’s deployed, a teen refugee waiting with diminishing hope of ever seeing her parents again, or even a shop attendant met in the previous game whom Shepard can help reconcile with her krogan bondmate; should you do this, you can find yourself delivering his final words in the form of a heartwrenching poem to her.

Perhaps it’s odd to find such satisfaction in BioWare’s tragedies but it’s moments like that where I found myself utterly absorbed in the world and as a narrative-lover that feeling of complete and total immersion is what I crave most. There are lovely cute moments as well, and they’re vital to give relief and shape to the misery, but Mass Effect 3’s heart is squarely rooted in making you sad, and in that I personally think it achieves.

That said, it is of course impossible to discuss Mass Effect 3 without addressing the elephant in the room. It is to many a monumentally disappointing game, for various reasons. Fans of roleplaying Shepard in conversation will find many of those options, so prevalent in previous games, stripped right back in this entry. Though there are still some more involved sidequests, an awful lot of the game can be spent performing a simple and perfunctory circuit of the Citadel to pick up micro-quests and then scanning planets from orbit to complete them. Though there are slightly more options available to players with regards to distributing points and building characters’ powers in different ways, the combat is still very much a third-person cover shooter, and there’s a lot of it.

The biggest gripe of all is, naturally, the ending. Rest assured I shan’t go into it here for obvious spoiler reasons but suffice it to say I can see precisely why people find it such a slap in the face. In some ways I share those sentiments. I think it probably was, in the end, impossible to live up to the expectations set by not just this game, but really as an accumulation of all the expectations of the entire trilogy. Nevertheless, it is not a particularly good ending. For any veterans of old-school CRPG writing and idiosyncrasies the form the ending takes is perhaps not terribly surprising. I don’t however find it truly as abhorrent as some make it out to be. Disappointing, sure, but not crushingly so. The love I have for the game that precedes it eclipses enough of the low points for me to more or less overlook the final blip as the trilogy concludes.

There is, I think, little more to say. Visually the game continues the series’ marvelous aesthetic. It echoes the writing by opting for a darker palette, especially aboard the Normandy; gone is the bright chrome of Cerberus’ vessel, replaced instead by glaring orange and blue neon striking out in dark rooms and cramped corridors filled with equipment for tracking the war effort. The worlds you visit, though beautiful, are often a background detail to the broken warzones Shepard occupies, and you might find them a less appealing battleground than say, the beaches of Virmire, or the alien strangeness of a Collector ship.

The soundtrack is equally sombre. The series’ typical synths now trend towards doleful slow pulses, such as in Creation, while much of the cinematic underscore is given over to sinister orchestration. Running throughout the game is a recurring piano melody that carves a solitary and melancholic auditory path; simple and beautifully evocative, it is often paired with the terrifying, otherworldly snarl of the Reapers. Though Leaving Earth is perhaps the most visceral example of its use, it is peppered throughout the game and it never fails to leave its forlorn touch upon me – see also, An End Once And For All for that exquisite misery.

Mass Effect 3 is all about endings. It’s an end to one of the finest set of games of its generation. It’s an end to Shepard’s long and arduous story. Regardless of the perceived quality of the finale, finishing Mass Effect still feels a massive event and that is no mean feat to achieve. As a resolution to the trilogy, epic is the only apt description, and while the individual game perhaps doesn’t live up to every expectation, it is still a excellent time and I for one will never tire of returning to it. 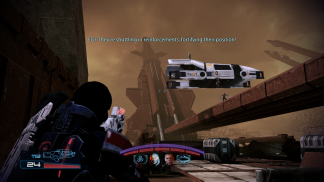 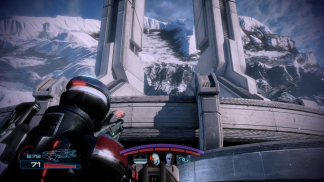 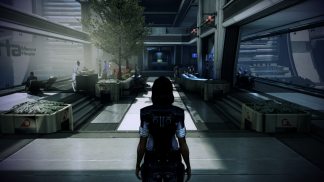 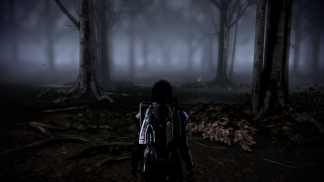 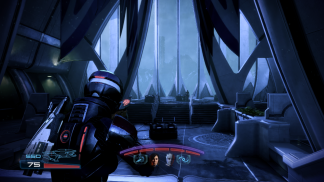 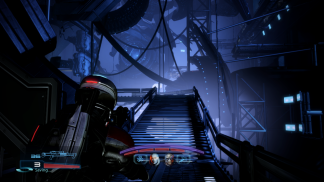 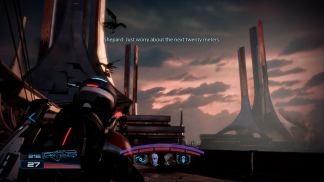 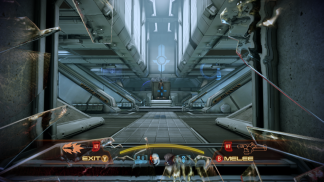 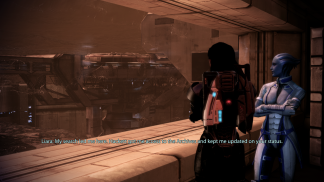 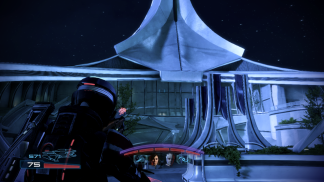 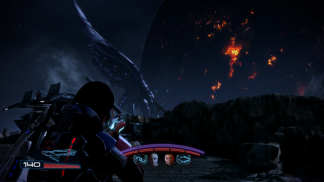 One thought on “Mass Effect 3”