Let’s head back in time, shall we? Back, far back, to the distant land of 2007, the era of our ancestors, by which I mean my slightly younger self. The entire Assassin’s Creed franchise was on sale on the Xbox One about a week before this article was written and so Microsoft’s big boxy behemoth gets to be my own little Animus for this quick replay of the first entry into Ubisoft’s now unavoidable series of vaguely stealthy stab-em-ups.

But does it hold up? Was it ever any good to begin with? Let’s take a little look-see. 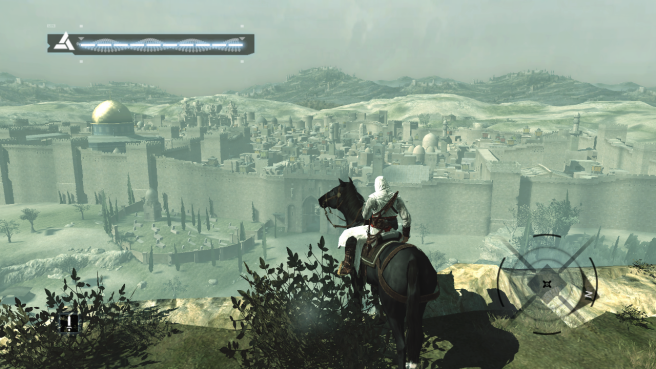 From this very first entry, the plot is established as being split between two stories. The majority of the narrative is spent with Altair, a member of a brotherhood of Assassins based in the Holy Land during the Third Crusade. The Assassins are locked in a secret war with a group known as the Templar Order; separate to the Knights Templar, instead, this Order consists of individuals from both sides of the Crusade, Christian and Saracen alike, bound together to seek out hidden artifacts that will allow them to exert covert control over society. The Assassins prefer ideals of freedom and free will, and race to uncover the same artifacts to stop them falling into Templar hands.

The Assassins are built on the titular Creed of three tenets: they don’t kill innocents, they stay hidden, and they never compromise their Brotherhood. Our protagonist opens the game by breaking all three; shamed and chastised, Altair is stripped of his rank and weaponry and is tasked with rooting out the Templars that control the three great cities of the Levant – Damascus, Acre, and Jerusalem – and bringing an end to their schemes. It’s a story of redemption that lends itself well to showing Altair’s personal character growth as he comes to term with his arrogance and the destructive fallout of his actions.

But don’t be fooled into thinking this is simply a historical story with a quirky Dan Brown-esque twist! Assassin’s Creed is actually a sci-fi game in disguise. As the game unfolds, we periodically return to Desmond Miles, a bartender held prisoner by the evil corporation Abstergo. Under the glaring eye of the modern day Templar Dr Vidic, Desmond is forced into the Animus, a hi-tech computer that allows him to relive the “genetic memories” of his ancestors. Desmond can trace his history back to Altair and so can act out the events of Altair’s life in order for the Templars to discover secrets buried in these memories. What had Altair found out and what was his connection was to these hidden artifacts that the Templars and Assassins warred over?

Central it all is Altair’s development, which forms a key part of his characterisation. It’s a rather well-written part of the game; his change is clear in both his speech, and in how other characters address him. There are a very limited number of characters who converse with him regularly, but the Rafiq (or bureau leader) in each city clearly develop their assessment of the disgraced Assassin with each visit, making for a very satisfying conclusion. In contrast, the modern day story is filled with far more aggressive dialogue between Desmond and Vidic; Vidic does not play the subtle, conniving villain well and his paper-thin veneer of politeness cracks extremely quickly. Desmond, played by Nolan North, is admittedly a weak point; he mostly spends his time blathering about as the plot happens around and to him and his lack of proactivity quickly marks him as the most feeble member of the cast.

Both combat and platforming are clunky. Combat is built around a system of waiting and countering. In theory, Altair is designed to patiently bide his time until an opening appears as enemies attack and then swiftly and fluidly dispatch them instantly with a well-timed counter kill. In practice however either you spend time awkwardly flailing at guards until they finally capitulate or Altair waits and waits and waits until you can use a counter attack to try and instantly kill them with a flashy animation, by which point you’ve lost focus a little and you’ve missed your window and oh bugger he’s been hit again. Finesse and beautiful this really isn’t, though it should be said that if you do hit your stride for a few brief moments it can be stunningly absorbing to watch Altair spin and dance around opponents with consummate grace.

The free-running, which is a development of Ubisoft’s previous system in the Prince of Persia trilogy, was certainly groundbreaking on release, with Altair able to clamber up practically any surface at speed. The little animations that play out as Altair cranes his neck to look for nearby handholds and reaches with outstretched fingers looking to hook onto ledges or outcroppings gives the climbing a tangible sense of character and life. Unfortunately, the actual climbing itself is sluggish and Altair is prone to confusion, meaning he will occasionally freeze up rather than ascend what appears to be a perfectly climbable wall. This game also saw the first instances in the series of the same problem that plagued the Prince of Persia games, with Altair often getting confused and jumping towards or off things that you didn’t intend, and many a session can be cut short thanks to a random and unintended death because of Altair’s forbidden love with faceplanting the ground from too-high perches.

While not the prettiest or most vibrant looking game in existence – this did release at the height of the Brown Age of gaming after all – Assassin’s Creed does feature a rather effective use of colour. Each of the principle cities is suffused in a glow (or sometimes a miasma) of a specific shade, immediately visually identifying them. The thriving hub of Damascus is bathed in a dusky desert brown as vendors and customers alike bustle together in the cramped souks, Acre has a deathly grey pallor, suitable for a city strewn with rubble and corpses, wearing both as ghastly trophies of the Crusade and Jerusalem has a softly lit, verdant fuzziness to it, a sign of its life and business, even in the war-torn Holy Land. While some of the animations can be stilted, you do occasionally see moments of gorgeous detail in the animation – it’s tiny but say, seeing Altair’s legs react to blocks of different levels and depths is a stunning level of detail for a game over a decade old.

It’s a shame that quality doesn’t extend to the voice acting however, which is, quite frankly, dreadful. The braying of saved citizens is especially egregious, and hearing the same voice clips recycled over and over again gets grating remarkably rapidly. A minor grump upon release was concerned with Altair’s broad American accent but it’s certainly not a great issue – the game has more pressing problems than an unusual choice in voice actor.

Assassin’s Creed’s soundtrack is primarily ambient, with a mix of folk elements and a disjointed, stuttering electronic twinge. Thematically it matches the presentation of the story, swinging from folk to synthesised as the narrative pulls back Desmond and the Animus. Tracks like City of Jerusalem showcase some of the lighter folk moments, and I love the incorporation of chanted Latin vocals; it perfectly fits the setting alongside the lilting pipes and strings. Most city tracks have an accompanying danger track which they transition quite naturally into. For City of Jerusalem for example, the move to Flight Through Jerusalem sees the vocals become more intense as both Christian and Muslim chants become mixed with one another, while more frenetic percussion gives the track pace. Compare this to the proud and menacing brass and threatening, booming drum pounds of Spirit of Damascus, or the latter half of Trouble in Jerusalem where the chanting reaches new levels of frantic tension.

Compositions like Access the Animus showcase more modern touches. The drums are far more heavily produced and distorted, and the strings shift from providing a colourful underscore to a deeply unsettling background element. Tinny electronic strikes punctuate the noise, shaping the feeling of peril Desmond feels during his imprisonment. A standout track is Meditation of the Assassins, which uses percussive bowls and shaker beads to give a more contemplative, spiritual feel but underpinned with a distinct, dangerous foundation. Though individual tracks can be really well-constructed and enjoyable to listen to, unfortunately it isn’t always very noticeable during gameplay, which is a shame.

The game features a straightforward linear progression. With each assassinated target, Altair works his way back up the rungs of the Assassin’s career ladder, and earns back his equipment and abilities (I’m not sure exactly how that works? Is he not allowed to catch ledges until he’s offed enough people? Video games!). The piece by piece rebuilding of our Master Assassin is balanced against more suspicious and stronger guards who even well into the endgame can certainly catch you off guard tear Altair apart. The early hours of the game are the slowest; by about sequence 4 you’ve unlocked the counter kill and the ability to grab distant ledges at the end of lengthy jumps and the ease and fluidity with which you can manoeuvre during both combat and free-running becomes almost silky. These moments are when Assassin’s Creed is at its best, and I do certainly enjoy them, regardless of how dated the game has become.

If Assassin’s Creed has a legacy, it is unfortunately one of some disappointment and failure to reach its potential. While not a bad game per se, this first entry in what is now a titanic franchise is characterised chiefly by what it doesn’t manage to do. It is of course an ambitious game and although its ideas fail to live up to its promise, one that tries is, in my opinion, far more acceptable a failure than something bland or devoid of effort. It does nevertheless provide a bevy of issues. The combat, the platforming, the constant repetition of world tasks, the lack of anything to really do in the game world, the endlessly recycled voice clips, instant-death swimming, the beggar women who exist for no purpose than to hold you up, the unfathomable Third Crusade horseback speed limit, traveling the same path out from Masyaf every single time you start a new mission, the barren and empty open world, the pointlessness of collecting a billion hidden flags; all these individual annoyances add up to one huge malaise.

Assassin’s Creed isn’t, I think, a poor game. It doesn’t however live up to its potential, and that’s a real shame. While it was certainly an interesting game, even when it first released it was clear that it was a prototype for something far better. Over a decade on, and the experience of replaying it was very much the same for me – enjoyable at its core, and built around a great idea, but the execution falls a tiny bit short. Worth the time? Yes. But a perfect, grand, brilliant time? Regrettably not, but there is still a spark of greatness buried in there somewhere.