Assassin’s Creed II is great for cold opens. Our hapless present day protagonist is rescued from the shadowy, sinister Abstergo corporation, whisked away by a tiny team of Assassins who quickly pop him back in the Animus. Then, as we’re loaded up with the memories of a new ancestor, we get hit straight away with being born! Desperate not to commit the time-wasting sins of its predecessor, Assassin’s Creed II does its best to chuck the player in at the deep-end and get going.

How I’ve missed this game. 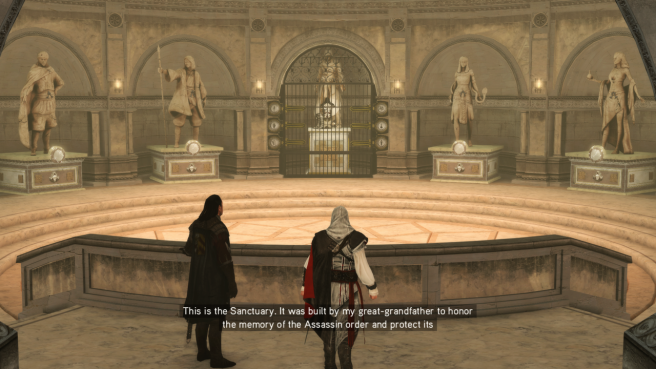 Here we are again, back in the Animus’ seat with another one of Ubisoft’s innumerable stabbing simulators. Desmond is back, and this time he’s marginally less useless than before! For those who were none too pleased with the modern day sections of the first game, fear not! This time these bits where the actual plot is thrown at you are few and far between, and one of them is literally Desmond waking up and then telling his new friends to put him back in immediately, a wryly tongue-in-cheek jab at the lengthy cutscenes from before. Let’s be like him then, and get to the interesting stuff.

Assassin’s Creed II puts us in the memories of one Ezio Auditore, the cocky son of a Florentine banker in Renaissance Italy. Ezio spends his days hedonistically, running over rooftops, picking fights with local bullies, and occasionally sneaking into his girlfriend’s bedroom in the middle of the night before beating a hasty retreat in the morning from an irate father. Unfortunately for him, despite the work of Altair 350-odd years earlier, the Templar conspiracy is alive and well, and it closes in around poor Ezio. After his (secretly an Assassin) father and brothers are executed and his family are hounded out of Firenze, Ezio takes up the work of the Assassins, swearing revenge against the Templars that threaten Italy. 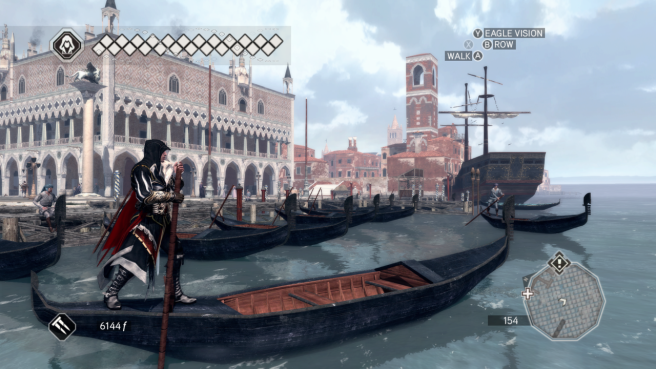 Tied into all this conspiracy guff is of course the modern day plot as the Assassins use Ezio’s memories to frantically search for Pieces of Eden, mythical and ancient artifacts of unimaginable power, before the Templars gather them to take control of the world. It’s a pleasant enough framing device although this game is the first time where it threatens to grow a bit out of control as layers upon layers of the mystery are piled up before the player.

Thankfully, the enjoyable characters and exciting plot of Ezio’s revenge take up centre-stage for most of the game. Ezio himself is charming, suave, prone to anger and moments of goofiness, but most of all he clearly has a heart and across the course of the 2 decades we follow him for here he develops into a genuinely likeable character. His interactions with older, more dedicated Assassins change in dynamic as he ages and comes to see their point more, while his friendship with one Leonardo da Vinci is one of the most heartwarming in video gaming. 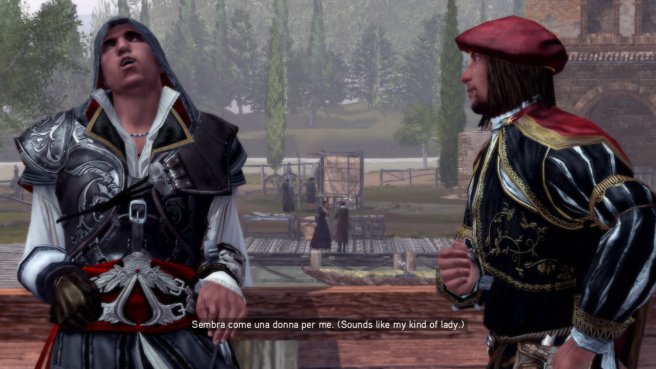 The mechanics have had a nice upgrade since Altair’s time. Chiefly, we have smoother movement in general; Ezio can more fluidly scale buildings as opposed to Altair’s jerky stop-start climbing and can, later in the game, leap while jumping for even quicker ascents. However, as in the first game, you will always have the problem where the game gets confused and where you think you’ve told Ezio to go is at odds with where he actually goes; this leads to timed platforming sections and chases being particularly frustrating as Ezio scrabbles at walls or ledges that you’ve not aimed him towards, and occasionally leads to cheap, avoidable deaths.

The stealth is also better. Hiding in haystacks and roof gardens, or by blending in on benches all return from Assassin’s Creed, but Ezio can now blend seamlessly with any group of people in the gameworld instead of just special groups as in the first game. Given the bustling Italian streets, this is incredibly useful though it is perhaps a little too easy for Ezio to walk too fast for the group or be jostled out of hiding. Also new is the notoriety system. High profile actions fill up a bar, and the more full it gets, the quicker guards will notice and attack Ezio. It can be lowered by tearing down posters, bribing speakers, or silencing eye-witnesses; it all tries to give a little more emphasis to stealth, though it’s hard not to consider the stealth a surface-level detail when so much of the game is action or cinematic set-pieces. 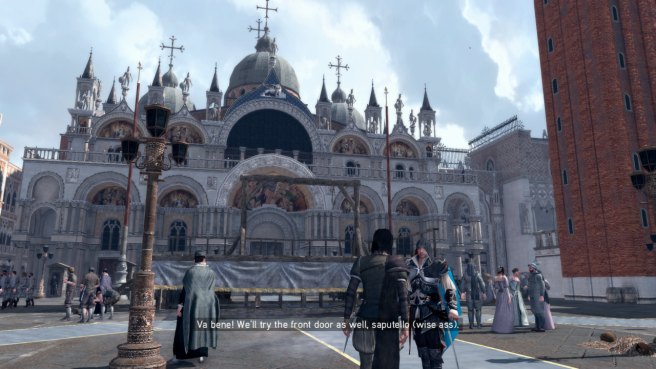 The combat has definitely been made more forgiving, mainly thanks to the more generous window of time you have to counter attacks in. Unfortunately, like the previous game it can often still come down to waiting for enemies to attack and then countering for an instant kill, rather than encouraging proactivity in fights. That Ezio has access to a vast array of weaponry compared to Altair does make things a little more interesting at least, but if you like your combat fun and mobile, Assassin’s Creed II might be a touch frustrating. Speaking of frustrating, the instant fail-state that comes with a number of missions make for an annoying time and it often feels like the game randomly forces you to fail. There aren’t many options to be stealthy in the main missions, and the combination of mandatory non-detection assignments with the game’s desperate need to be cinematic and action-paced doesn’t work to its advantage.

At least there’s more to do now. Side missions and content are abundant, in contrast to the first game. Assassination contracts see Ezio tasked with taking out specific Templars and races test his platforming prowess; Ezio can take courier jobs for extra cash, and even exercise his love of justice by beating up the cheating partners of wronged women. The centrepiece is the Assassin Tombs, secret and elaborate challenges that test all of Ezio’s skills in some of the finest and most impressive locations in the game. It must be said, some side content is a bit naff though, especially the quest to collect 100 feathers from around Italy; while there is a good plot reason to do so, the task is arduous and the rewards are dreadful. Anyone familiar with Ubisoft games will notice plenty of familiar things here; in many ways this is one of the places where Ubisoft’s current design philosophy took hold. 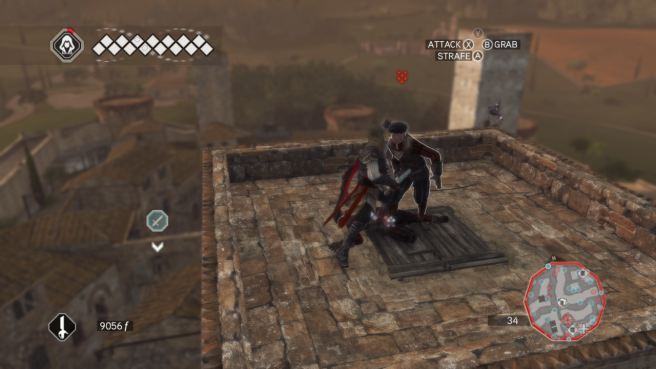 But what about Italy though! Ezio’s journey takes him to far more grandiose places than Altair; from the gorgeous mercantile hive of Firenze, to the cramped canals of Venice, Ezio treks across the Italian republics in his quest against the Templars. The sense of scale is startling as landmarks feel fittingly vast and ornate while at street level the crowds and overhanging builds feel cramped and suffocating.

You’ll spend plenty of time as well in Monterrigioni, which becomes your headquarters for the game early on. Ezio takes responsibility for the town and the family villa upon arrival and almost everything Ezio can spend money on increases its worth and prosperity. From new armour upgrades to weapons, even to the art that can be hung on the walls of the villa, it all serves to restore the town to its former glory. The town’s shops and services can also be upgraded, giving you access to more supplies and in return the town generates income for Ezio every 20 minutes or so. It crafts a sense of progression and the restoration of the town feels in-character for Ezio, though there isn’t really much use to it beyond that as once you’ve upgraded it all you’re essentially just hoarding money.

This collection also includes the DLC for Assassin’s Creed II. Templar lairs are the same as the Assassin Tombs but they give out a cash reward, while the villa also features a family crypt that lets Ezio explore the origins of his family if you want lore. The big draw is the two sequences excised from the story, the Battle of Forli and the Bonfire of the Vanities. These fill in a highly conspicuous gap in the original narrative although in terms of the wider plot absolutely nothing of consequence happens. I remember being quite annoyed about these 2 sequences obviously being ripped out of the game for DLC but after playing I revised my opinion and time has not sweetened it.

Both serve primarily to give you a reason to go back to places you’ve already been – Forli and Firenze respectively – but neither have anything approaching interesting plot or missions. Both force the player to wallow in tedious trekking across maps to accomplish one arbitrary task after another. They also absolutely wreck the pace of the game, forcing you to take a mandatory sojourn into mediocre DLC rather than let you avoid them and just head to the finale. The only saving grace is that they don’t last long. 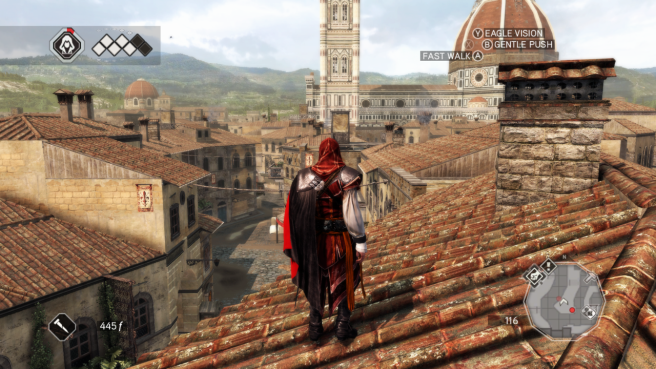 Assassin’s Creed II is, without a doubt, a huge improvement over the first game, and has been a joy to replay. There is still some definite room to improve: some of the core issues with Assassin’s Creed, such as the platforming problems and the glacial combat haven’t really been addressed, but there’s enough made better by this game that it stands head and shoulders above its predecessor. 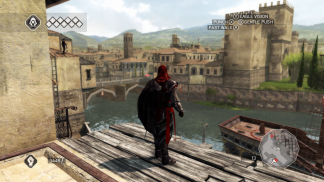