There’s nothing quite like a reboot! Tomb Raider is an awfully well-established franchise and like all long-running series eventually it needs a bit of a revamp to keep it relevant and interesting. I have fantastically clear memories of the original Tomb Raider game on PS1; it was one of the first games I ever owned (at an age far, far too young to appreciate it on any level) but other than that one fleeting time I’d more or less ignored the series. For me, this 2013 reboot Tomb Raider was a chance to finally engage with the franchise and see one of these games through to the end.

Our hero is Lara Croft, a young archaeologist setting out on her first expedition. Things can’t go smoothly though as her ship is wrecked on an island off the coast of Japan. Lara is immediately knocked out and captured, and in a dark and twisted narrative lurch she is left to die in a shrine strewn with corpses and bones. Up against a murderous cult, Lara escapes and sets out to find her lost crewmates and uncover the mystery of an island inhabited with savage killers, rotting Japanese bunkers, and a storm that stops being leaving.

The game plays out a standard adventure-thriller affair, but that’s no bad thing; it’s told pretty well, to be honest, even if it’s not entirely to my taste. Unlike many other Tomb Raider games, this narrative begins very much rooted in the real. Events and locations are deeply unsettling on the island, but there’s normally a rational explanation, which I think makes it all the scarier in contrast to having a gunfight against a T-Rex after traipsing through a temple.

The less said about the characters the better though. Tomb Raider suffers a little from having just too large a cast to be effective. Lara obviously gets a spotlight, and her relationships with her gruff-but-caring mentor Roth and her friend Sam are carefully developed – the latter especially bears all the hallmarks of a love interest given how the two interact. Those hoping for that to be explored or expanded will be left disappointed though as Sam takes the role of damsel in distress for the majority of the game; the rest of the crew of the Endurance are one-note, throwaway characters (sometimes literally). The villain of the piece is similarly underdeveloped. Very little time is given over to any sort of character arc and no half-decent logical reasoning exists for their actions; essentially they’re just evil because the game needed a baddie.

Right from the off, the game is utterly obsessed with making Lara suffer. Literally just from the opening cutscene to the first moments of gameplay, she takes a blow to the head from steel piping, gets trapped in a sinking ship and almost drowns, falls from the ship into churning waters, wakes up and is immediately knocked out, burns herself to get out of her bindings, gets impaled and then removes the spike that is stuck through her by ripping it out; all this is accompanied by visceral visual effects and aural stabs. I know this might not mean much to some – she is a fictional character after all, and some people have that disconnect – but it honestly makes me uncomfortable, and the fact that this trend continues throughout the game leads me to believe that the development team can only have been utterly sadistic. The fact that the game sometimes lingers on Lara’s twitching and scrabbling corpse during the death screens frankly only confirms my suspicions.

My first thoughts before going in would that the game would surely resemble Uncharted. Nathan Drake’s light-hearted National Treasure-esque adventures took their cues from the earlier Tomb Raider entries after all, but the sheer vicious hate for Lara and the scary, gory cult she encounters owe far more to survival horror than any earlier outing for Croft; it succeeds magnificently at crafting a feeling of uneasy worry, and does its utmost to never let the player destress; it much prefers to force the player into panicking.

Many gameplay elements are familiar to anyone who has played your standard big-budget games from the era. Combat is built around third-person cover shooting with optional stealth abilities to even the odds before combat. The player can gather items to upgrade Lara’s skills, and her survival vision is the all-but ubiquitous Batman: Arkham Detective Vision, allowing Lara to survey her surroundings in grayscale and view interactable objects. Quicktime events crop up during cutscenes and typically lead to grim and gory instant deaths; they are mostly relegated to cutscenes rather than being a core part of gameplay, and so are easy to miss, hence the deaths. Oddly for both this kind of game and its franchise, there aren’t many types of puzzles though; those that are included often have very simple solutions. It all feels a bit anticlimactic compared to some of the wilder stuff other comparable franchises do.

Some mention was made on release about the fact that there’s not an awful lot of actual tomb raiding in this reboot but I can’t say I much care about that criticism. The game opts for a more realistic and less action-movie approach, and I can respect that; I suppose it is a bit of a shame that long-standing elements of the series are not represented here though – Lara doesn’t have her famous dual pistols, instead only wielding one, and her platforming and combat styles both tend towards the brisk and brutal, rather than approaching with any flair. Then again, this is after all a Lara at the beginning of her adventures, devoid of confidence, and the brutish, less finessed approach makes sense here.

A criticism I do agree with though is that it does stand as a textbook example of ludonarrative dissonance. For the uninitiated, this is a disconnect between the message of the story or characters and that of the gameplay. It’s often misused by many when discussing games, but here it is on clear display. Lara, as befits her character, spends much of the game afraid of confrontation; she is visibly distraught when she has to kill a deer for food and breaks down during a radio conversation shortly after. The first cultist she kills naturally leaves her wracked with remorse. All of this is very well-written and believable characterisation, but it is undermined by the fact that the gameplay is combat-intensive and Lara not only murders swathes of people without batting an eyelid, she even takes the opportunity to quip every once in a while. These two jarring versions of Lara, one in service of the story and the other in service of the gameplay, are at odds and belie a problem with the story Crystal Dynamics wanted to tell and how they chose to go about presenting it. It’s not a huge problem, and I suspect if you enjoy the game you won’t care at all, but it’s an interesting conundrum that I think is worth noting; some games adopt violence well, but Tomb Raider struggles to strike the balance.

It doesn’t half look gorgeous though! Weather effects contribute to the atmosphere beautifully; I love the way the rains lash down and smoothly wipe away the accumulated blood and grime from Lara, or when the fog rolls in, menacing and obscuring, heightening the sense of fear and tension in the player and Lara alike. As much as I hate the way Lara is treated by the game, the gore and ichor that she is thrown into is (worryingly) lovingly rendered; thankfully so are the other locations in the game, from the lonely Japanese forests to creaking, rusting hulks of wrecks that Lara clambers gingerly across.

Each area on the island has a challenge to complete, and collectibles that require a keen eye, a lot of platforming, and liberal use of Lara’s Survival Vision to find. The collectible artifacts offer a chance for our hero to show off her knowledge, which I found I rather appreciated – it’s nice for Lara to actually be an archaeologist. Areas are also rammed with salvage to find in order to upgrade weapons and opportunities to earn experience points and level up Lara’s skills, so there’s plenty of impetus to explore all of the gameworld.

Though the areas are pretty open, it’s not quite an open-world; instead progression is semi-linear. At first it can feel very set and straightforward as Lara moves from area to area following the plot but certain parts of the island are open; players who choose to take it slow and explore will benefit a lot from it, particularly when you return to earlier locations with new options to open up paths previously blocked. Fittingly, it encourages an adventuring spirit even if it is at the expense of the fast-paced and cinematic narrative.

It would be hard for me to say I like Tomb Raider. It’s too gore-obsessed and poe-faced to be a fun adventure, its cast is too underdeveloped, and it’s just too bland and safe a time in terms of its gameplay and narrative beats to be all that stimulating. But like plenty of bland, safe action media, it’s also a totally fine time, held up by excellent production values and the kind of story that requires no taxing input or investment from the player. It’s easily consumable media, with the right blend of simple puzzling, standard cover-shooting combat, some upgrades for a quick feel of progression, and an added bonus of having some marvelously well-wrought tension that keeps up throughout. It’s worth your time if you can get it on sale for sure. 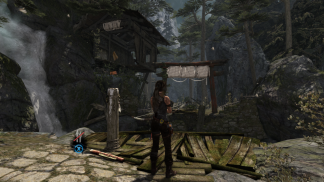 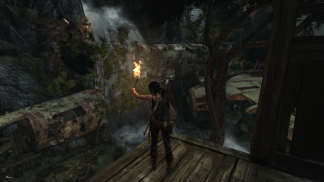