When you think about it, setting a game about two conniving groups warring for power in the American Revolution makes perfect sense. Ubisoft’s long-running series detailing the never-ending fight over humanity between the Assassins and the Templars might have begun in simpler times where the man with the biggest army and sharpest sword won the day, but by the 18th century politics was a little more complex. Nevertheless, sometimes history seems to call for a sneaky chap with a knife in the dark, but the question Assassin’s Creed III asks is how can they fit in to a changing world?

It is 2012 and the world is ending. Desmond and his merry band of Assassins are on the run and make camp in a long-buried First Civilisation temple, hiding there while they plan their next moves to try and stop the Templars. Drawn by whispers and clues left across time by Those Who Came Before, Desmond must dive into a new ancestor’s memories in order to find a key that unlocks something within the temple to save the world.

This new ancestor is Ratonhnhake:ton, or Connor as he his renamed by the people he meets as he leaves his small village out in the wilds of the frontier. After a vision from a spirit, he seeks out Achilles Davenport, a crotchety and crippled old man left embittered by the eradication of the Assassin Brotherhood under his watch. Despite Achilles’ reticence, Connor is persistent and eventually convinces him to train him as an Assassin. It doesn’t take long before Connor finds himself embroiled in the emerging war between the British and the Americans looking for independence.

It’s a little eye-rolling the degree to which the game is desperate for its cast to get involved with significant events and characters. Within the first moments of arriving in Boston at the beginning of the game you bump into Benjamin Franklin and he gives you a sidequest and throughout the game Connor is involved with practically every noteworthy person or moment in the American War of Independence, from the Boston Tea Party to the Signing of the Declaration of Independence, regardless of whether or not there’s any good reason for him to be there. It harms the suspension of disbelief significantly. Connor’s profound importance to the events of the Revolution reaches absurd levels at times; he even accompanies Paul Revere on his midnight ride for no good reason.

It is perhaps no surprise that Assassin’s Creed III has a reputation for being boring and though it’s not without merit I do hesitate to condemn it entirely. Ubisoft clearly opted to move into a far more tightly-controlled cinematic experience; while you can of course spend much of your time dilly-dallying about in the open world, the main missions are typically centred around major events. Unfortunately this makes it less “Assassin’s” Creed and more “Action-Adventurer’s” Creed. 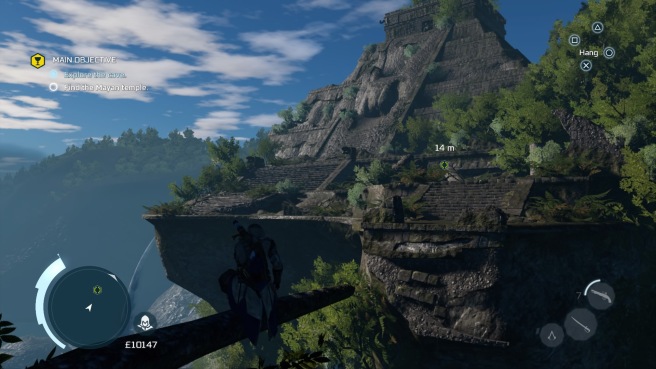 It is truly remarkable how dully inhuman Connor is during the main plot given how much the optional missions and even the extra conversations and interactions he can have flesh his personality out. In the narrative our protagonist is dour and sullen; I suppose the writers hoped he’d come across as unsure and wracked with doubt over which cause to serve, being caught as he is between the war-wrought fire and political scheming of the Patriots, the single-minded revenge of Achilles’ crusade against the Templars, and the rising tensions of the Native American tribes being shunted around by conflict and colonisation. Instead he mostly comes across as useless, meandering between them all and with little agency of his own and possessing of a meek indifference to all of them. It makes for an uninspiring main character, particularly after the charming and cheeky Ezio.

And yet, Connor somehow comes alive in the additional dialogues and quests. The lengthy sidequest to build up the Davenport Homestead is home to some of the best interactions in the game, as more and more settlers each begin to turn the estate into a home. Here we get to see Connor at his most human; he is inquisitive as new industries are brought to him, sharp and protective in his defence of his new friends, and even awkward and clumsy during a minor quest to find a suitable gift to give two budding lovebirds. It’s remarkable that none of this writing made into the main quest, and it means only those who actively want to explore Assassin’s Creed III‘s content will see the better writing hidden in it.

The story is not well paced. Despite being an Assassin’s Creed game in name, you don’t get to be an Assassin and actually get into the main bulk of the game until the end of Sequence 5, a full third (and then some) through the game. Before that you play as an additional character as they arrive in the Americas and begin to set their life up, as well as a couple of sequences as a young Connor living a relatively peaceful life in his Mohawk village. It’s lovely scene-setting, for sure, but it hardly makes for compelling Assassin’s Creed gameplay. There’s nothing so offensive as the first-person puzzle platforming of Revelations but it is yet another example of Ubisoft randomly flitting between ideas without settling. It’s reflected in the gameplay as well; there is a glut of content for players to tackle but probably too much, with too little substance.

The modern day sections are finally alright though! Desmond actually gets missions! And they’re okay! I like the little detail of the HUD disappearing; you’re so used to it in the Animus that its removal when you’re in the modern day sections works beautifully to immerse you. Each one of the 3 missions lets Desmond showcase a different set of skills, with one built around platforming, one around stealth, and one around combat; the stealth one is perhaps my favourite, forcing you to blend in crowds without that added security of the HUD. There’s no markers and no indicators that you’re hidden beyond the fact that you’re still alive and not being attacked by hordes of Abstergo guards. One small issue that arises with the modern day sections is that a new villain is introduced without actually bothering to introduce him; Daniel Cross will no doubt be familiar to anyone who has read the tie-in comics but if you haven’t (as I hadn’t) you’re going to be a bit lost, regardless of the hurried explanation of who he is.

The newly-formed towns of Boston and New York form the core of Connor’s Templar hunting grounds, but they simply cannot compare to the vast cities of the previous games. Small boxy buildings and tiny churches just aren’t as interesting to clamber around on as the great landmarks of Renaissance Italy or the Levant. Worse still, there’s very little in the way of unique character to either city; both are more or less identical – contrast that to the high, narrow roofs above the canals of Venice, or the oppressive sprawl of Constantinople. On the other hand, the wilds of the frontier brim with life. They’re teeming with animals to hunt – Connor makes use of his upbringing to expertly bait and trap critters, as well as using his heightened senses to track prey, which can be skinned for valuable resources. Work has definitely been put into making the frontier feel genuine, with animals exhibiting realistic behaviour patterns; like much of Assassin’s Creed III, it’s a lot of detail but the substance isn’t necessarily there.

That said, the platforming has been seriously improved; the ease with which Connor can run up and through the trees is joyous and the animations are more fluid than ever – it’s a small detail but I particularly like the way which he climbs up rock faces, which now are almost always scalable objects rather than the untouchable walls of previous entries. If you take a step back and look it’s painfully obvious how the trees all line up into neat free-running paths but frankly during the game I never really cared to notice it; it’s all too easy to lose yourself in simply enjoying the movement.

Speaking of enjoying the moment, perhaps the best (and most surprising) thing added in Assassin’s Creed III is sailing! Connor finds an ally in the old sailor Robert Faulkner (played by Kevin McNally essentially reprising his role as Mr Gibbs from Pirates of the Caribbean) and together the pair resurrect the Aquila, a ship that once terrorised the North Seas. Connor takes to the seas as readily as he takes to running through trees, and you guide him as he helms the ship in the major naval battles of the war. It’s obviously not super realistic but realism has been sacrificed for sheer excitement. You can switch between different shot types and sail setups, managing rogue waves and winds crashing against the bow forcing you off course, and naturally you engage enemies directly in naval combat. It’s clear that a lot of work went into the Aquila gameplay, which makes it a shame that it is predominantly a side mission with only a mere handful of moments at its helm in the main story. It also creates the need to generate loads of money just for ship upgrades if you want to survive any of the missions. 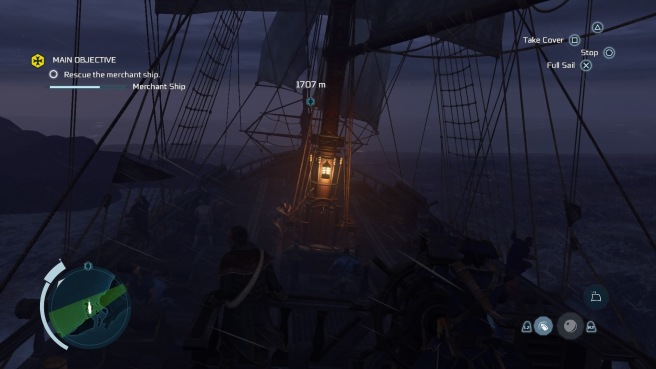 Regrettably however there are some more pressing problems here. The game is riddled with artifacting; even in the remake there are plenty of graphical glitches. They’re often minor but frequent enough to be a real annoyance. In fact, in general the 2019 release is a really glitchy remaster; the amount of times hint boxes and text have stuck on screen is ridiculous, and missions have failed to mark as complete – it’s by no means unplayable but that’s hardly a high bar to set!

Of course, even a remaster can’t fix the problems that are retained from the original release. It’s a game that falls prey to excessive tutorials; because there are some many bits of nebulous content to do and because the gameplay changes from mission to mission you are smashed over the head with hint and hint with barely any time to let the game settle. On top of that there are voice acting and sound issues – some cutscenes have no underscore which leaves them sounding empty and puts the voice acting into a vacuum where you can really hear just how dodgy some of it is. 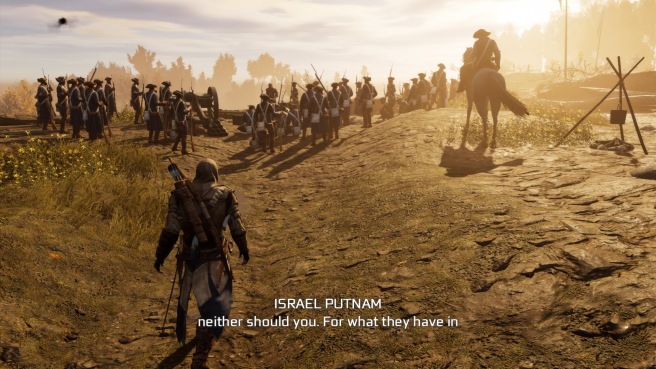 Assassin’s Creed III is a game of missed potential. It definitely could have been worse, but it does try at least. It would have been so easy to be lazy with the storytelling but it goes out of its way to ensure that the twisted politics of the time, combined with the series’ own fantasy conflict, is as well reflected as possible. It’s not so much that there’s heroes on both sides, but rather horrible individuals are spread everywhere. The game is willing to portray the Patriots as manipulative and conniving next to the obviously tyrannical British; the ways in which Connor is played and cast aside by Washington and his allies speaks to a hypocrisy that the Assassin points out. Equally Connor is the first protagonist we see who seems genuinely willing to try and work together with the Templars as he simply tries desperately to bring peace to his life and protect his people. Ultimately, though the game doesn’t meet these lofty ambitions, I much prefer that it tried and failed.