“Hi Plip! I’m the village Squizard!” Right, because he’s a squid… and he’s a wizard, you see? Yeah, it’s adorable. 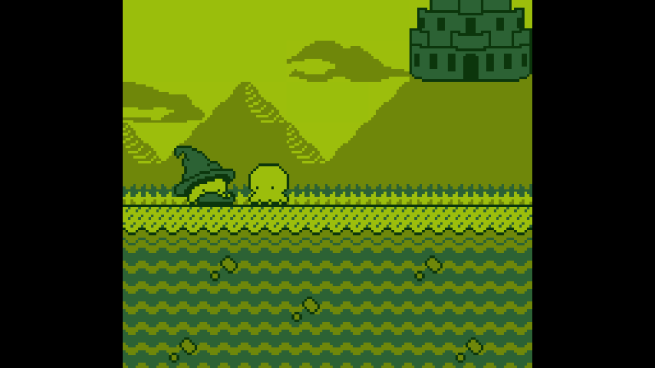 Squidlit is an ode to the Nintendo Game Boy. It’s a love letter to Nintendo’s wonderful handheld, right down to the meticulously recreated limitations of the hardware, from the restrictions on the sprites per line, to that distinctive “grellow” tinge that all Game Boy games displayed in. If you’re a retro-game enthusiast, Squidlit is probably going to be right up your alley, as dedicated as it is to preserving and using the Game Boy as its basis.

To be fair, if you’re a retro-game enthusiast in general you’re probably enjoying games rather a lot at the minute. There’s an interesting trend in modern games currently, and that is the nostalgia-driven lust for retro games, and in particular newly-created and released titles that emulate these old-fashioned idiosyncrasies. There are plenty of examples, and so many different eras of older games that are seeing modern games based on them. Some look to the NES and SNES, like Alwa’s Awakening and Shovel Knight; others look to later consoles, like the PS1-inspired Devil Daggers, or the wodge of N64-era 3D platformer revivals spearheaded by Yooka-Laylee and A Hat in Time. We are in a little Golden Age of revivalist gaming, and Squidlit is an excellent addition to these storied halls of new old games.

Squidlit is achingly adorable. We step into the squidgy tentacles of Plip, a villager from the tiny hamlet of Blipston. But, oh no! The evil God-Emperor Skwit Skwot is threatening the village and the village Squizard can’t take her on lest the village is left unprotected! It all falls to Plip to squrp (this may not be an actual word but the Steam store page uses it and gosh darn it that’s good enough for me) her way to adventure and defeat the foul fiend! This is exactly the kind of pure, simple story that I can remember from those halcyon days spent playing my Game Boy as a child, and it’s told with such gumption and heart that it’s so easy to sink into it and enjoy the goofy loveliness that’s on display. Even the little speeches given by each and every character ooze with cutesy charm and even the walking animation has this pleasingly tentacle wave as Plip moves and oh my gosh it’s all too cute

Also (and this is incredibly important) by pressing down Plip entertains herself with a little dance.

You may have worked out that Squidlit is not a complex game on any level, but that’s just fine. Plip can only either avoid enemies or jump and splat ink on their heads by way of an attack, and yet, given the simplicity of the gameplay it’s fantastic seeing the ways that the developers made each of the game’s 4 bosses a bit different to the norm. I wouldn’t go so far as to say it keeps you guessing, but it shakes up the formula and gives you a little rush of excitement as you try and work out the boss gimmick each time. Crucially, it never strays into the realm of difficulty though – sure there’s a light curve, with each subsequent level being a touch trickier but it’s never going to be a game for the hardcore challenge seekers, unless you’re looking to do a speedrun, the record of which currently stands at below 9 minutes!

In a small note that I did have from playing, there does seem to be a slight knack to the jumping. If Plip is overhanging a ledge she fails to jump, and getting used to jumping a bit earlier than you expect can catch you off guard and because of this, tumbling down into an enemy was a common occurrence in my time with Squidlit. That said, the game has no real stakes, and death is very much just a light slap on the wrist so there’s no worries there then. 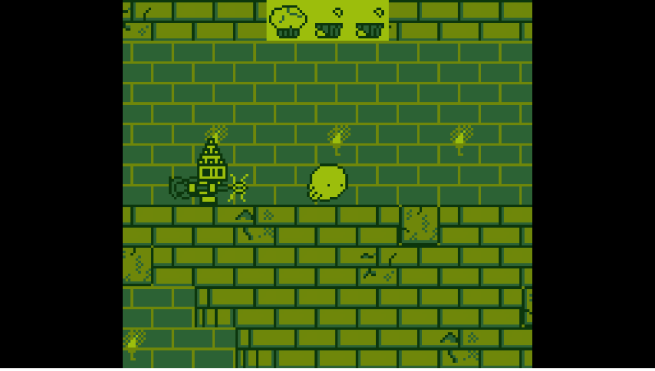 In one of the coolest nods to nostalgia, the soundtrack was composed entirely using Game Boy software and to Game Boy restrictions. As such, with that comes a different compositional philosophy, which makes the soundtrack instantly recognisable. What I love about old soundtracks is on full display here. With such heavy restrictions, melody has to come first and foremost, with percussion and harmonies used sparingly to embellish tunes. As much as the development of modern soundtracks has been wonderful, too often I feel like massive orchestrated soundtracks trade strong, memorable melodies for vast arrangements and cinematic gusto. There’s something calming and beautiful about the old ways of game composition that appeals to me on a very personal level and it is that which Squidlit taps into. From those scratchy white noise drum beats in Blipston Theme, the truncated blips launching into a Mario-jump glissando in Squishy Road and even the filthy fuzz in Castle, the tracks all bring with them waves of nostalgia and joy. My clear favourite is Skwit Skwot’s Laboratory with zapping lightning, blasting thunder and that dirty rumbling bassline;  the Game Boy produced such distinctive sounds that hearing them used so creatively here is honestly marvelous.

If you’re sitting there asking yourself should I play Squidlit, the answer is a clear “yes!”. I mean, aside from anything, it’s dirt cheap and it’s dead short, meaning that you’re not signing yourself up for a huge financial or time investment and by doing so you are supporting clever, innovative independent game development, which is awesome. Squidlit isn’t a revelatory game-changer or anything, but what it sets out to do it accomplishes with aplomb, and that should be supported and applauded. 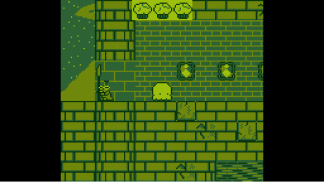