It’s weird sequel time in Kingdom Hearts land! Let’s check out Re: Chain of Memories, the oddball interquel released to tide us over while waiting for Kingdom Hearts II. It sure is something!

To open with a dull clarification, there are a couple of versions of Chain of Memories, with a few differences between them. Originally released on the GBA, Chain of Memories was a sprite-based sidescroller in battle, with an isometric view outside of it; it got later remade as Re: Chain of Memories and this time was presented in full 3D. The version included on the series collections on the PS3 and PS4 is this later remake; these editions also have a little added content that links to the other games in the franchise, as well as the PS4 one running at 60 fps for that added smoothness.

Chain of Memories is all about changing things up for the stranger. Both the plot and gameplay alike are notable in their oddness, and it sets a trend for the portable entries in the franchise taking risks and being a bit different to the norm. In their continuing search for King Mickey and Sora’s estranged friend Riku, Sora, Donald, and Goofy stumble across an eerie castle teetering between the worlds of light and darkness. Inside they are greeted by a mysterious cloaked man who presents them with an unsettling message; the people they seek are trapped on the highest floor of the castle but working their way up the castle will cost them a hefty price: their memories. Sora and co. being the plucky heroes they are immediately disregard this potential issue and charge headlong into the fray but soon find themselves rapidly forgetting more and more about their previous adventure.

It’s not all simple as that though. Alongside all this runs a couple of concurrent plot threads; we meet the villainous Organization for the first time, a cabal of shadowy individuals who hamper Sora’s progress. On top of this, though the entire trio are losing their memories, only Sora finds himself remembering new things and new people as he climbs Castle Oblivion. The plot threads only occasionally threaten to overrun each other; ultimately though the narrative is convoluted and somewhat daft, it does at least make sense. There’s little of the hearts and darkness and/or light therein madness that engulfs Kingdom Hearts’ latter story beats; instead the conceit of Chain of Memories plot is comparatively simple. It’s not an exceptional story, and like its predecessor it sometimes sinks into eye-rolling narm but that’s par for the franchise and I can’t honestly say that doesn’t charm me a little in much the same way as it did in the first game.

I said before that Chain of Memories begins a trend of the portable entries in the series taking risks and in this game’s case that comes in the form of its combat system. Whereas Kingdom Hearts was a straightforward action-RPG, Chain of Memories adapts that system into a card-based action battle system. There are plenty of grumbles thrown at it for this change but personally I quite enjoy it. In practice, there’s not much different to Kingdom Hearts – it’s still real-time action RPG combat but whereas the first game had you cycle through a menu of attacks, spells, items, and summons, in this game this is done by cycling through a deck of cards.

Like many card games, the key lies in how you build your deck. Getting the right combination of cards together can prove make-or-break for your time with Chain of Memories; if you build a poorly-performing deck it can be incredibly frustrating and utterly ruin your game. However, taking the time to learn the admittedly slightly complicated way Chain of Memories works does pay dividends. Paying attention to card values is as vital as card types due to the game’s Card Break system; if you use a higher value card than your opponent then you stun them and vice versa; cards with a 0 value can break and be broken by anything, making them exceedingly valuable. 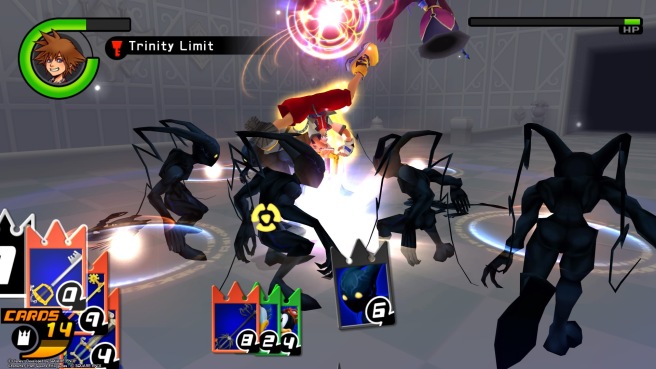 It’s not just a case of stacking your deck with 9 and 0 cards however. You only have a limited number of Card Points and more valuable cards cost more points to put in your deck, forcing you to be creative with how you build your deck. Sora can also learn Sleights, special abilities that require specific combinations of cards and values to play, meaning that should you want to use them you’ll have to build your deck to accommodate it. While complex at first, if you can wrap your head around Chain of Memories’ card system you can find yourself flying through combat and reveling in the hectic boss fights as you shuffle your deck looking for just the right combination of cards to play or ways to break your opponent’s attack; the fact that this is all in real-time makes it that much more exciting but again raises the barrier to entry. 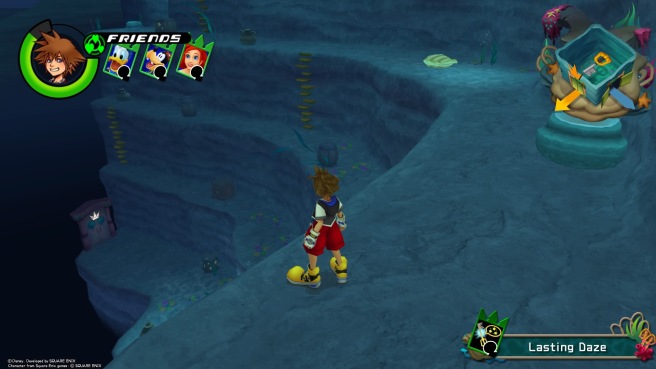 Cards are also used to generate the levels in which you play. Each floor of the castle is divided into rooms and you play cards to create them; after battle, enemies drop one of a bevy of different kinds of Room Cards. Some change the way monsters spawn or how they act in battle, such as creating more powerful foes that drop more experience points, or spawning sleeping enemies that are easy to get the jump on. Others change the properties of items you can use or strengthen your own cards, while others simply provide respite rooms to break up the combat. These latter ones are important as only one type of card can create a room with a save point and that’s the only way you can save your progress mid-floor; save points appear before and at the end of a floor but if you’re out of save room cards you have to take on the floor in one full sitting; thankfully floors can be each be beaten in an hour or so, so it’s not too much work on your part.

Chain of Memories does provide a slight annoyance in that it features levels we’ve already seen in the series. Only a couple of worlds we visit are new, while the rest are copied from Kingdom Hearts. Although this does make sense given the conceit of the game in forcing Sora to revisit his memories, it does also smack a little of laziness or licensing issues and going back through the worlds might cause a sigh of boredom from some. It orobably wouldn’t be much of an issue at all were it not for the fact that we also have to relive the individual plots of each world again, with most of the internal Disney world narratives being the same as they were in the first game. There was some promise there as well, annoyingly – in the tutorial level Sora meets characters from the first game who claim they can’t remember him but then know his name and there’s a vague awareness of the strangeness of it all; this idea might have been an interesting dynamic to bring to the other returning worlds but sadly it’s never brought up again.

While we’re talking complaints, the lack of voice acting is a shame. It’s unsurprising that a GBA game would be text heavy, and the remake does add in some voiced scenes in Castle Oblivion, but having to mash X to get through lengthy cutscenes comprised primarily of text boxes is a chore. The auto-targeting outside of battle is decidedly dodgy; Sora seems to default to aiming his swings at whatever destructible stuff is in the room rather than enemies and when he does aim at enemies it seems to be done begrudgingly.

Something else I can’t abide in games is boss repetition, and Chain of Memories is a particularly irritating offender of this. You fight one boss 4 times! They get maybe one new attack each time around, and that doesn’t work to keep it feeling fresh or interesting; you’re still fighting the same guy 4 bloody times!

In general though, I really enjoy Chain of Memories. It’s easy to see why it has its detractors – the card system is at worst obnoxious and comes with a steep learning curve, and it is punishing if you can’t engage with and learn it. However, I found myself immersed quite quickly; I have a fondness for deckbuilding and Chain of Memories satisfied that love easily. Being able to construct fast and lethal decks that combo together Sora’s most powerful attacks was hugely fun, and the intensity of that system during combat was enthralling in the best possible way. The narrative might be nothing to write home about, but I’d wholeheartedly recommend Chain of Memories regardless. 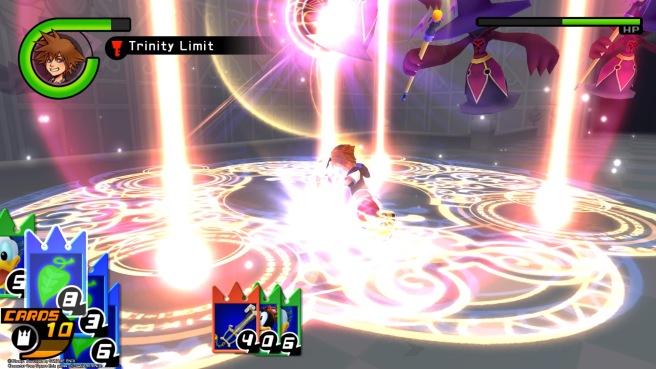