The mid-to-late aughts saw a swathe of games that sought to copy the stunning success of stylish hack-and-slashers like God of War and Devil May Cry; Dante’s Inferno was simply one of this swarm that was trying to ape this trend. But the thing that made the trendsetters popular is that they were both damn fine games, a fact that sometimes copycats fail to take onboard. So how does Dante’s Inferno fare? 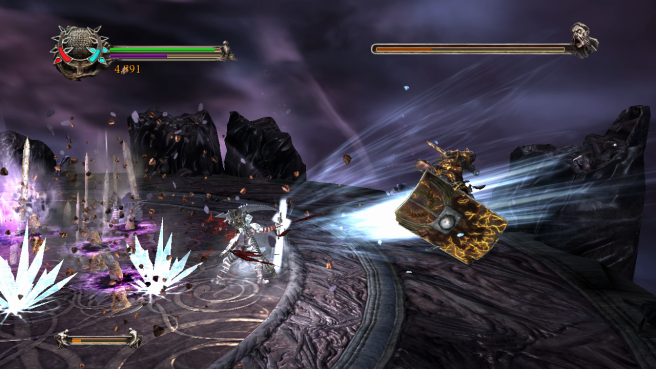 Dante’s Inferno is very, very (and I cannot stress this enough), very loosely based on the first part of the epic poem The Divine Comedy. Whereas the historical Dante Alighieri was a Florentine poet, statesman, and theorist, that’s nowhere near action-packed enough for a God of War clone! Our Dante is far more grumbly and brutal; he’s a Templar who commits a wodge of sins during the Third Crusade, for which Death himself appears to condemn him. Dante, being a reasonable sort, kills Death. As in, literally rips the Grim Reaper in half with his own scythe. He abandons the crusade and returns home, hoping to fall into the arms of his dearly beloved Beatrice. Unfortunately for him, Lucifer has not taken kindly to Death’s err… death (I dunno why, I guess they were BFFs?) and the legions of Hell have torn Dante’s home apart and left his wife defiled and dead. Dante arrives home in time to witness her soul being whisked off to Hell, and vows revenge upon the Devil himself.

Whether or not you’ll enjoy Dante’s Inferno will largely depend on your tolerance of, and patience for, gleeful mindless bloodshed. I think it’s fair to say the sophistication of one of Italy’s greatest works of literary art has not transposed over to this adaptation; while our Dante still pals around with the ghost of Virgil, the original work has rather less rending of unbaptized children and bathing in the blood of the lustful than this game. It’s as childish as God of War in its love of murder; while it attracted some controversy over it, I think instead there’s not that much to be offended by – it’s all so dramatically over the top and nonsensical that it swings around to being harmless guff. 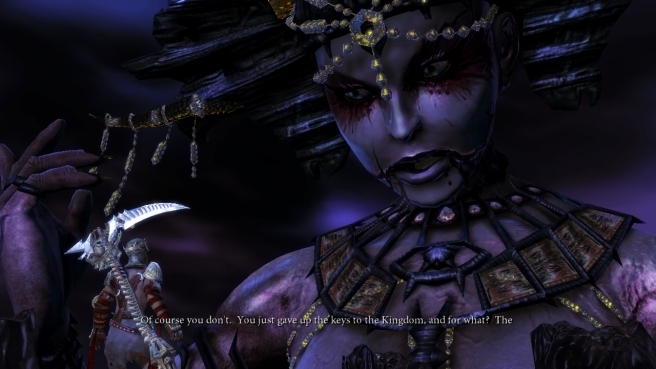 The combat is like God of War but less good. Dante’s scythe has both light and heavy attacks, which are as visually fancy as to be expected. Death’s scythe is appropriately made of bones but it’s also strangely stretchy and whiplike, meaning Dante dances with balletic grace and poise. Like God of War (get used to that phrase because I am committed to pointing out the similarities) the combat flows exceptionally well, and it wants to allow Dante to engage in lengthy, lethal combos. For a clone it manages to reproduce that sensation impressively well.

You also have access to a set of ranged attacks. Your primary method of smiting far-off enemies is to launch bolts of holy energy from a cross Dante recovers from Beatrice’s corpse. Surprisingly the cross attacks have so much weight to it; Dante swings it with almost laborious difficulty, the screen shakes a bit with each hit, and the sound of the blasts is sharp and forceful, lending it far more satisfying heft than you might expect at first, which it makes it a joy to use. Dante also gets a repertoire of magic spells; progress through Hell’s circles unlocks most of them, while certain Holy-aligned spells can only be gathered by pouring points into Dante’s upgrade trees. The spells are again, surprisingly good; I’m a big fan of the damaging shield provided by the Lust Storm, engulfing Dante in a moaning, lightning-spewing tornado, but all of them have their uses. On top of that, collectible relics give passive bonuses that improve as you use them and level them up. I’ve said “surprisingly” and I feel that’s justified – the fact that Dante’s Inferno has had some thought and quality poured it; more than perhaps you might expect for a copycat game. That said, disappointingly for a game that manages to copy God of War so well in most areas, it skimps quite a bit on the near-constant quicktime events and we get rather perfunctory and plain qtes. 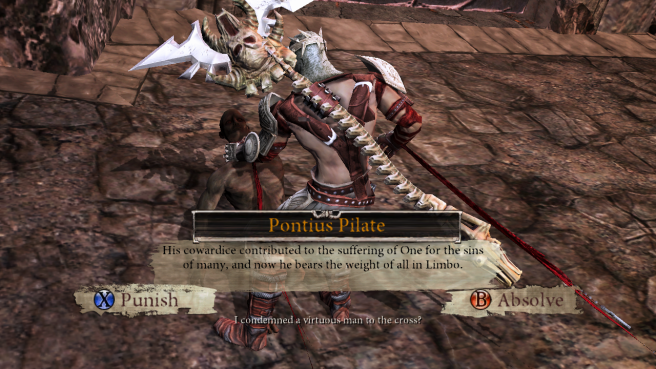 One of the primary differences that Dante’s Inferno uses to try and set itself apart from the games it’s aping is the inclusion of a morality system, or to be more precise the pseudo-morality system. Dante can choose to punish or absolve the souls of sinners – this can be done either in combat by grabbing an enemy and doing a quick minigame, or through finding lost souls of specific historical characters and doing another, sometimes far lengthier minigame. The point of this is purely to do with upgrading your weapons; without Unholy points you can’t max the scythe out and you need Holy points to upgrade the Cross to the fullest. Amazingly that’s basically it; there is no difference whatsoever in the narrative for going as Unholy or as Holy as possible, it really is just a different experience point that locks off the best attacks and because of it you have to question whether it’s really worth having it then. The only other benefit of gathering Unholy or Holy points is that certain relics need you to meet a threshold on either side to equip them but it’s not restrictive; you can be super Holy without locking off the Unholy path or relics. 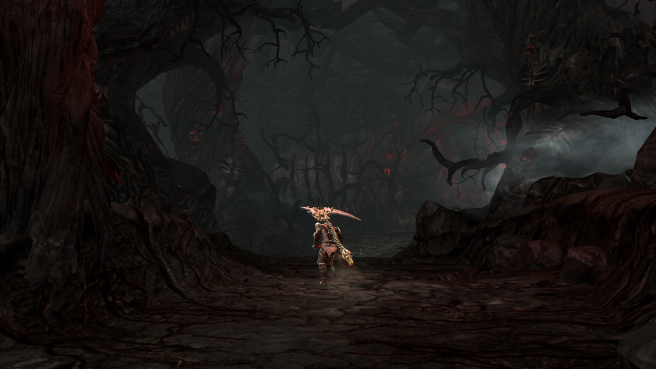 While I’m not that impressed with the game’s pretty lacklustre score, the ambient sound is genuinely monstrous. The wails and shrieks of tormented souls cut right through all other music or sounds and it creates an eerie, awful atmosphere that is a perfect fit for the mad descent through the levels of Hell. It’s a good thing too, as it gives the game sound a more interesting element than the otherwise bog-standard action game score that plods along to the narrative in utterly predictable ways.

The visuals are as abhorrent as the sounds. Damned souls, writhing in torment are your one truly constant companion in this journey; the walls Dante clambers across are lined with them, the great ladders down which he slides deeper into Hell are fused chains of bodies, and the sludge and mires are replete with suffering people trying to claw their way out. Each level of Hell has been modelled with a sickening degree of thematic accuracy; from the veiny towers of Lust to the boiling golden swamps of Greed, it’s easy to buy into Visceral’s vision, though particular mention must go to Gluttony which is easily the most uncomfortable level to me. There’s something that makes me squirm right down to my bones about squelching through the halls made of bloated guts and leaping over the walls of rotting teeth that turns my stomach, so in that respect I can only say bravo to the art directors and designers. 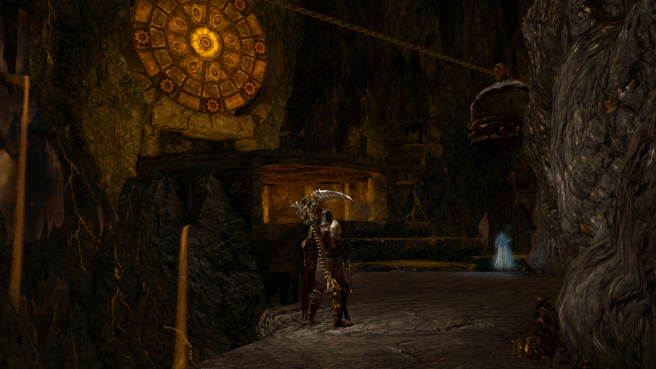 Blessedly Dante’s Inferno is a reasonably brief experience. That’s not necessarily a bad thing; these types of games can be quite intense and this one is no exception, so the brevity is welcome. The pace is left high and at times it feels like you’re hurtling through the game, though searching for the hidden pieces of silver given to Judas, absolving or punishing all the lost souls, and gathering all the Relics offer some longevity and replay value for the completionists. The final few circles are complete toss though; one late-game level is simply a set of 10 challenge rooms that you have to slog through, and the final tier of Hell is a tiny platforming sequence and an arbitrarily slow hidden path puzzle before the ending boss fight.

Still, Dante’s Inferno might be about as good a clone of God of War as you could get. It’s quick, visceral, and visually and aurally a stunningly uncomfortable time. It’s one of the few games of its type to nail what made God of War and Devil May Cry so good, and though it can’t hold a candle to its storied predecessors, it is still definitely worth a play. 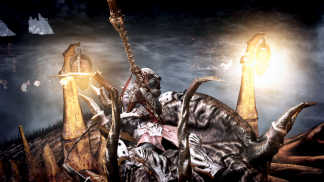