We all know what LEGO is, yeah? Of course we do; the tiny plastic blocks you can slap together and build anything you want are ubiquitous and it’s no surprise at all that they’ve made their way into the land of video games. In fact, it’s almost certainly cheaper to play the LEGO games than it is to buy actual LEGO.

There are some LEGO games which predate LEGO Star Wars but truth be told, not one of them made the impact that this game did. LEGO started making games in the ‘90s – the 1997 release LEGO Island was perhaps one of the most well-known of the early games, a kind of early Minecraft in which you were free to roam around a LEGO world and build stuff. LEGO Racers was another popular release, using the unique buildable properties of the blocks to let players construct cars before racing them. For me though, LEGO games in my childhood were defined almost exclusively by LEGO Rock Raiders, a 1999 RTS based on a set I have a real fondness for; the awesome dirty sci-fi setting, with run-down mining machines and attacking rock monsters still elicits a rush of wonderful nostalgia.

It was licensed properties though, that would launch LEGO into new heights of success, in both minikit terms and with regards to their games. Though their first dabble into licensed games came with 2001’s LEGO Creator: Harry Potter, it was a sandbox game with little in the way of actual structured gameplay. 2005 however saw the release of LEGO Star Wars, and the real moment in which LEGO’s video games became a routine fixture in release calendars and a franchise of licensed games which has continued until today.

LEGO Star Wars follows the plot of the Star Wars prequel trilogy – The Phantom Menace, Attack of the Clones, and Revenge of the Sith. “But wait,” I hear you cry. “Why not the good films?!” Presumably the answer is in timing – LEGO Star Wars released in the same year as Revenge of the Sith, and naturally there had been a whole slew of Star Wars LEGO kits since Star Wars became popular all over again. In fact, the game was released a whole month or so earlier than the film, meaning players got a general look at the events of the film well before it ever hit cinemas!

LEGO Star Wars would set the standard for practically every LEGO game to come. From a hub world, players select levels based on the events of each film. Each is framed by cutscenes that are conducted without any voice acting – instead our little plastic protagonists grunt and mumble their way through the events of the plot; this probably makes it a bit too obtuse for anyone who isn’t already a fan of the films, but I suspect it’s most likely Star Wars fans that are playing this anyway. That doesn’t stop the game from being funny though – in fact a lot of its appeal is its humour, and in the strange, often goofy and slapstick ways it needs to get the plot of its source material across. For my money, nothing will ever beat the sight of Darth Vader holding up a photo of Anakin and Padme in order to try and explain to Luke that he is in fact his father.

Once you’re in a level you’re greeted with a very competent action-platformer in which each character brings different attributes that interact with the world in varying ways. For example, Jedi like Obi-Wan Kenobi and Qui-Gon Jinn can use their lightsabers to dominate combat by deflecting blaster bolts back, and with the Force they can leap around to reach high-up areas and even use it to manipulate blocks into new shapes. Gun-wielding characters can use a grapple to reach new parts of levels, and even though droids can’t jump or interact with blocks, they can open certain doors. Each level demands multiple plays; first to go through the story mode, but then again in Free Play, a mode which enables you to use a bevy of characters you’ve already unlocked to comb the level for secrets and collectibles for that all-important 100% completion. Even more helpfully, when you begin a Free Play session the game automatically gives you a selection of characters that includes all of the abilities you’ve unlocked – you’ll always have a Jedi, a Sith, a blaster user, a pair of droids, and so on.

At least one level per film is a vehicle level, placing you in the cockpit of one of the franchise’s many ships. From the podracing of The Phantom Menace to the opening dogfight in Revenge of the Sith, these offer interesting changes to the formula. The 2 already mentioned are a race (naturally) and an on-rails shooter level respectively, but there’s also a top-down shooter level in Attack of the Clones; the Complete Saga remake also adds in a stage based on the speeder chase at the beginning, though unfortunately it’s actually quite a slow level, bogged down by needless interruptions. It is however, a one-off, unlike the other, better stages. 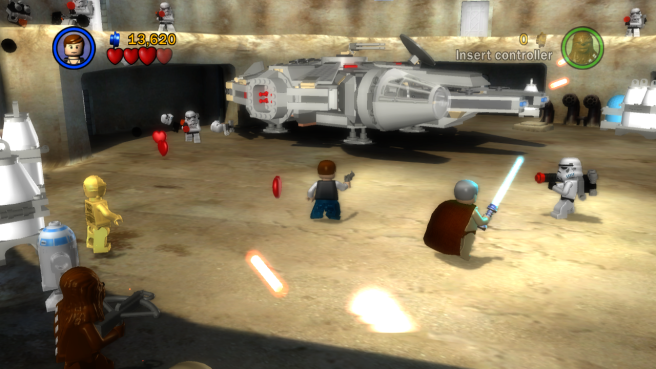 LEGO Star Wars was, naturally, followed up by LEGO Star Wars II: The Original Trilogy just a year later. This game, as the name implies, follows the events of the 3 original Star Wars films, A New Hope, The Empire Strikes Back and Return of the Jedi, and, like its predecessor, we get a set of levels based on each film. LEGO Star Wars II adds in a few gameplay changes to sharpen things up from the first game. For a start, characters can now build objects from LEGO, a change made to address the lack of Force users in the original trilogy. Most blaster characters can dodge shots by pressing the fire button just before a shot hits, and can also fight enemies in close quarters by punching (or ripping arms off in the case of Chewbacca). There are also 2 new collectibles – Gold and Red bricks. Red bricks are found hidden in the levels and unlock cheats, while Gold bricks are given for various milestones, such as beating a level in Story Mode.

These go hand-in-hand with the other collectibles that LEGO Star Wars introduced. Most LEGO objects are destructible and drop studs, the currency of the game, and a vast amount of studs are needed to unlock some characters and perks in the game’s hub. meaning replaying levels to hoover these up is an absolute must. Also hidden in levels are Minikits; each level has 10 to find and at the end of a stage these slam together to make a tiny Star Wars vehicle that sits in the garage at the Hub for you to peruse at your leisure. 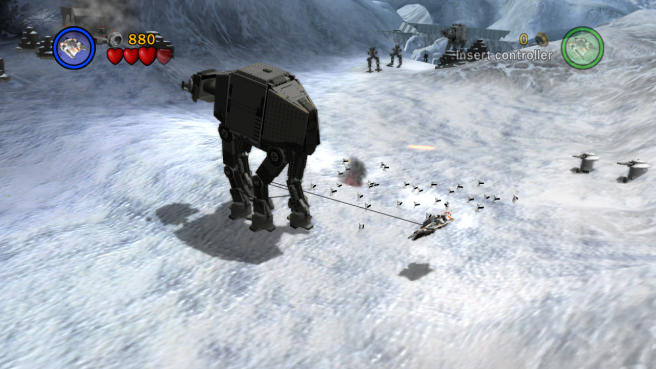 What the Complete Saga does then is put it all together in one fancy package. Rather than give us two separate, remastered games, the Complete Saga presents one unified game. The levels and characters from LEGO Star Wars benefit from all of the improvements made in the sequel, while LEGO Star Wars II is helped by sitting in context with its prequels. This does however throw into sharp relief the fact that the levels in the first game are, in general, slightly better than in II, with a little more tightly constructed design behind them.

It’s also quite clear now, especially in replaying them, that LEGO Star Wars and LEGO Star Wars II are both dated. Characters are a bit sluggish and the game a bit simple; perhaps what made the two games a big hit at the time was their novelty, whereas now it’s hard to ignore that these are both around 15 years old and they feel it. That’s not to say they’re bad games though; they are fun but the magic has worn a bit thin with time and familiarity. They’re also quite slow games; it didn’t take an awfully long time for me to beat it for this replay, at least to story end, but trying for completion is extremely tiring. Having to traipse back through the levels can feel a real chore, especially if you’re grinding for the stud multiplier unlocks. While perhaps it’s unfair to hold it against later releases, were you to buy it for someone now, especially if they’ve played those games, the tiny hub might feel restrictive.

Don’t let those gripes stop you from playing it though. If you’re a Star Wars fan, the Complete Saga is a worthy play. It’s a sharp, funny approach to the franchise, one which is highly self-aware that it’s a load of plastic people running around a LEGO brick work. The core is still a very solid platformer, with a tonne of replayability, and if it’s new to you I’d suspect that the drive to at least replay things in Free Play once would keep you on board for a while longer. 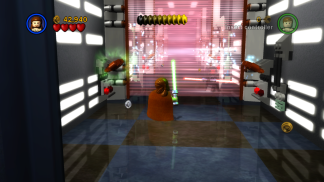 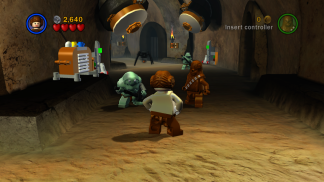 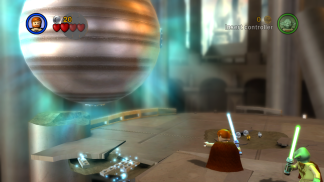 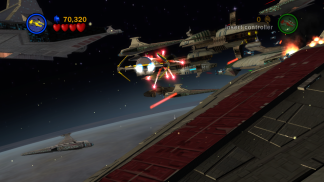 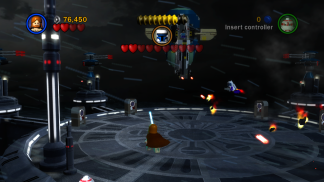 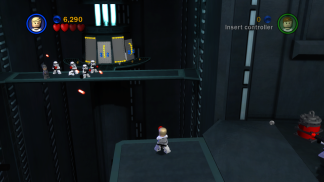 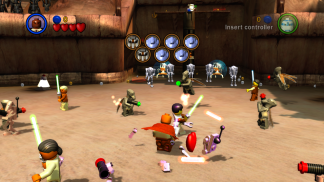 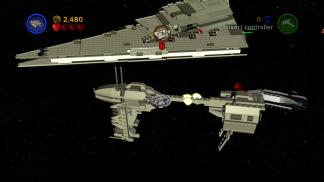