I admit it. I’m a huge fan of dirty, worn-out sci-fi. Firefly, Cowboy Bebop, Mos Eisley in Star Wars, the grimiest, seediest underbellies of Omega and the Citadel in Mass Effect; they all push my buttons in a massive way. The Outer Worlds really looked to channel that and that absolutely drew me in, even more than the big Obsidian branding.

I’ve got a whole lot of time for sci-fi with a strong anti-corporate message, and thankfully that typically goes hand-in-hand with that dirty, worn-out aesthetic I love. I suspect it comes from growing up and loving cyberpunk novels, Star Wars, and punk rock. In my mind, the joy of sci-fi coms from the freedom that the stars offer. Chalk it up to wild childhood dreams of wanting to be the Doctor, an eternal traveller, free to chart the vast and endless expanse of space. Just as much as that, I love sci-fi that is acutely aware of being trapped – the idea that the universe has been reduced because as humanity has expanded with them has come the crushing slow death of control and corpocracy. It’s why I love things like Elite: Dangerous as a subversive look into this kind of narrative, where space is reduced to a monotonous crawl with the deadly and inevitably short-lived excitement of piracy always nagging at the edge of your mind. 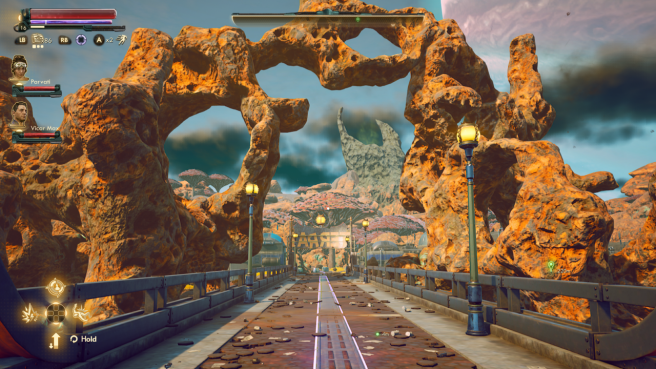 The Outer Worlds, then, practically revels in its hatred of corporations. Developed by Obsidian, The Outer Worlds is more or less Fallout: New Vegas in space; it seems Obsidian, not content with outdoing one Fallout game by putting the amazing New Vegas next to the merely very good Fallout 3, have done it again. The comparisons to Fallout 76 are inevitable given the proximity in their release and the similar tones of narrative and aesthetic, but let it be known that The Outer Worlds is orders of magnitude better than its non-Obsidian counterpart. They have done it again.

We become party to the story of Halcyon, a solar system owned and run by the Halcyon Holding Corporation and its associated Board. It’s only a short 10-year sleep in cryo away from Earth – except for you, and the other citizens aboard the Hope, a colony ship lost and set adrift for 70 years. Thawed by mad scientist Phineas welles, you are set loose with the goal of finding a way to safely thaw the rest of the Hope’s passengers.

The Outer Worlds, like plenty of RPGs, is all about choices. Your actions in Halcyon can strengthen or weaken the power of the Board, as well as alter life for the thousands of colonists eking out of living far from Earth. As you traipse across the planets of Halcyon, the extent of living under the Board becomes pretty clear. Almost immediately after landing on your planet you come across a sidequest to shake down people who haven’t paid their grave dues – that is, they have to pay to rent their own gravesites while they’re still alive, and an NPC who commits suicide causes a town panic because it is a crime, classed as damage to company property. It is this exceptional cynicism which pervades throughout the entirety of The Outer Worlds, and I love it deeply. Everywhere you visit in Halcyon has been shaped by the corpocracy, from the canning town where children are classified into jobs for life and shipped away from parents, to the independent ship-based colony slowly watching their halls and decks be ceded to the Board’s encroaching and unstoppable power.

It should be clear already that the strength of The Outer Worlds is in its world building and writing. Cynicism in its world is often offset by moments of sparkling humanity, such as the bubbly engineer Parvati and her clumsy, awkward, blossoming romance with which she asks for your help. These instances of compassion shrine through all the brighter. I admit to typically playing the good guy in RPGs but rarely does it feel so satisfying as in The Outer Worlds.

It is also hugely, darkly funny. From signs hung in the workplace that warn of the dangers of joining a union, to conversations with the mentally numb and catchphrase-spewing denizens of the colony, sardonic chuckles are always forthcoming. Exploring for logs is a typical pastime of mine in RPGs but again, there is an awful lot of narrative incentive to do so here. My favourite moment by far was one off-hand chat with a sales rep who, as part of their contract, has to wear a huge moon-shaped headpiece. Each line of dialogue thrown at him attempts to make him crack, and each time he fires back with a company-approved slogan response. Once he runs out, he has a mini-breakdown, and you can respond by recognizing that this is all this poor soul has known and he’s not ready to have the veil of corporate belonging lifted to see real freedom. You end the conversation by simply apologizing and moving on, leaving him behind.

Like any RPG worth its salt, The Outer Worlds is packed with all kinds of stats to manipulate. You pick your class to start, except in keeping with the themes of the game, it’s all guff like you were a cashier before going into cryo or you have a past as an extremely minor bureaucrat. Leveling up gives you points to spend on improving your stats. Like Fallout: New Vegas you can pool points into non-combat stats, so naturally I went mad on the dialogue, science, and lockpicking options – as a former cashier I figured I’d be great at chatting people up, and not averse to jimmying the old store safe. I dunno about science though, presumably they just had a GCSE in it or something? Anyway, these opened up a whole bevy of ways to solve quests without resorting to violence, and plenty of opportunities arose to talk my way out of scrapes. 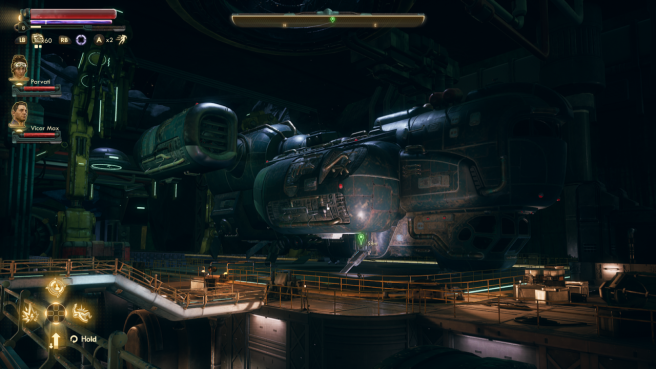 That said, you are going to get into combat at some point – it is definitely unavoidable, I think even for the stealthiest of smooth-talkers – so it is worth putting some points into at least one combat skill. The fighting is all in first-person and you’re probably going to want to pack a gun of some sort. You can choose to specialize in melee combat but personally I thought it felt awful so I’m not sure I’d recommend it. As a result of side effects from your unfreezing you have access to Tactical Time Dilation, or your standard bullet-time slow-mo in normal game terms. It’s basically a more mobile and active version of Fallout’s VATS mechanic, and it suits gun-wielding characters a lot more than it helps melee-based players.

Alongside points as you level up, you also get given Perks, most of which augment your combat abilities – extra health, better damage with certain weapon classes, even more slow-mo, that kind of thing. Along with Perks, you also get Flaws, which let you take a character flaw in exchange for another Perk. It’s a great idea, and in theory it’s fantastic for roleplaying, but the majority I came across just made some enemies hit me harder, or gave me a minor debuff, which is hardly a real problem. I think in general they’re just not that creative, which feels like a missed opportunity.

Exploration is definitely encouraged and oh boy did I want to explore while I was playing The Outer Worlds. Rather than give us one big map to explore, The Outer Worlds is set across a system of planets in the colony and each one comes with its own map to trudge about in; I’ll take more, slightly smaller but tightly constructed areas to explore any day of the week to be honest. Half the joy is finding the sidequests hidden about in them. Thankfully, said sidequests have some real thought and effort put into them, and I took on all of them with glee. The game only took me about 25 hours to beat but they were absolutely paced; not once did I feel like I was idling or turning on the game just to push through some tedious quest or errand. Instead, the tasks are well-written and worth playing, even if its just to see what line the Board will cross next. Of course, that might not stop you from wanting to ally with them!

The Outer Worlds certainly runs out of something near the end though. The early planets are very well built but once you reach the city of Byzantium in the mid-stages of the game you can see for sure that Obsidian ran out of time or money (or both) as its far sparser and less populated by quests than anywhere else, which is a shame. It does keep the game from running too long I suppose but that’s little consolation. 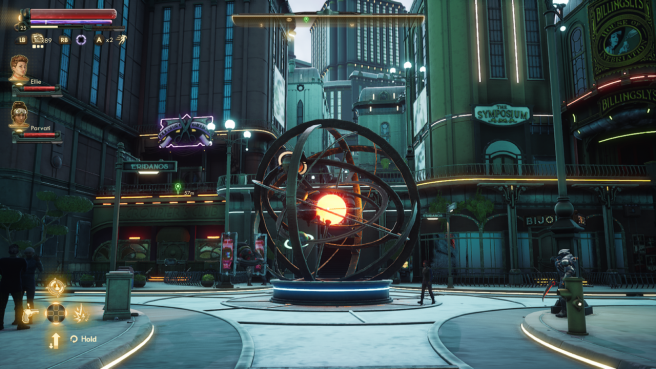 That sense of feeling rushed starts to extend from Byzantium through to the end of the game. After a point, the narrative starts to lack some depth and nuance; early quests give some remarkably exciting choices but by the end those difficult choices kind of ebb away. They’re replaced by much more binary options – the writing is still good though, so that helps at least. From a technical standpoint, my time with The Outer Worlds saw some slight stuttering and framerate drops and texture pop-in, especially outside of towns. Bear in mind I was playing on the Xbox One though and barely 4 months after release though – I’m sure the PC version has probably been better looked after and is presumably slightly more robust but even the minor issues present shouldn’t put you off playing the console version if that’s the only option. Other minor gripes are that the loading screens are just a touch too long for the amount you have to see, and the UI is really too small for my liking. If these sound like nitpicks, well that’s because they are to be honest.

There’s absolutely no denying I loved The Outer Worlds. It delivered on pretty much everything I wanted it to – sharp writing, solid combat, and a beautifully realised world encompassing a gorgeous space colony really does a lot to sell a game for me. It’s not without flaws and gripes, and it suffers a tiny bit towards the end, but that’s fine; they’re the kind of nitpicks I can overlook when given a game experience like this one. That said, the technical hiccups I encountered a good reminder of why I, and others, subscribe to the notion of patient gaming; while this is definitely a fun play right now, give it a few more months and I suspect The Outer Worlds might see at least one more patch that helps to fix up its performance on console a little more. 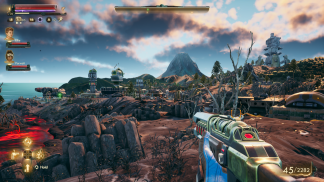 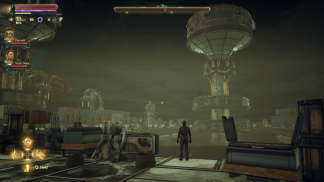 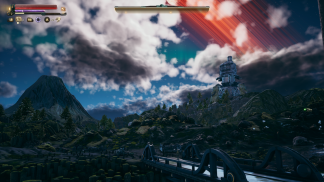 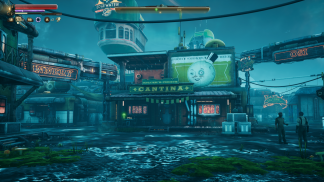 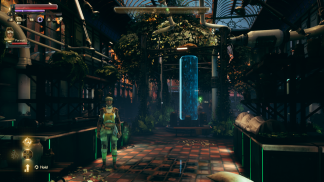 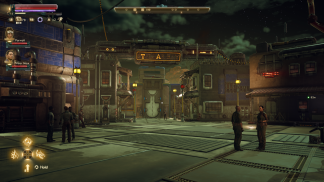