There’s one thing with long-running series: you always get remakes eventually. This is especially true as franchises start to spread across consoles; it ought to come as no surprise that Pokemon started to remake titles on later consoles and handhelds, given the series’ core concept of community gaming, trading, and battling. Pokemon FireRed and LeafGreen are reworked versions of the original entries, Red / Blue, for the GBA, and make use of the upgrades since the late ‘90s. I mentioned in my Ruby / Sapphire / Emerald review that those games were the last entries that I had any substantial nostalgia for, which puts FireRed / LeafGreen into a very peculiar place for me. I love the original releases dearly, so these should be right up my alley, yes? 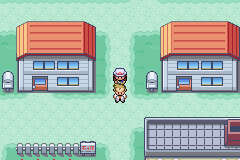 As before, you are a young kid in Pallet Town, a sleepy village on the coast of Kanto. The local Pokemon Professor, Oak, gifts you a rare Pokemon: the dumpy seed-backed Bulbasaur, the flame-tailed lizard Charmander, or the tiny turtle Squirtle. Your take one, your rival takes another, and off you set on your journey to catch all the critters and defeat every Gym Leader on your road to becoming the Champion Trainer of all Kanto.

As you progress on your path, you’ll run afoul of the evil Team Rocket, a gang of miscreants who want to make a quick profit by exploiting Pokemon. You defeat them, and all the other obstacles in your way, by training a balanced team of monsters, taking advantage of the series’ now familiar elemental types to battle your way to victory. The plot is thin on the ground and in that respect FireRed / LeafGreen is a faithful remake. If you were expecting a bit more on that front – and I’d say that’s fair, a remake should feel free to expand upon its original self – do prepare to be a bit disappointed.

Where FireRed / LeafGreen has seen changes is certainly in the gameplay. Aspects such as the new Types (Steel and Dark), friendship, breeding, and Abilities have all been carried forward from the games released after Red / Blue / Yellow. This gives veterans of the franchise some new things to deal with; while the region of Kanto might no longer surprise you one can still get caught off guard once or twice by the changes made to once-familiar Pokemon.

Little things like Pokemon gaining new Types and therefore new strengths and weaknesses are a good example of this. Magnemite, for example, gains the Steel Type alongside its original Electric, so he can now be punched to bits by Fighting Pokemon or burned by Fire Types; the early game Trainer who drops one on you in Mt. Moon can definitely be problematic for players with a team that isn’t quite balanced enough! On top of that, the new additions to the movesets that Pokemon learn give players more options, such as the fire starter Charmander learning Metal Claw in the early teens to give it a fighting chance against the first Gym.

Abilities provide perhaps the biggest challenge to adapt to. Koga’s Poison Gym for example has a newfound infamy for me. Where once his humble team of Koffings and Weezing could be swept aside by one well-leveled Ground Type, their new innate Ability to Levitate renders them immune to moves like Earthquake or Dig and suddenly the Gym can become a grinding challenge (though this does at least fit Poison’s typical gameplay). 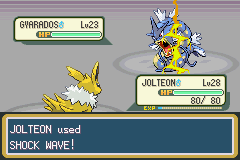 Kanto is certainly more colourful and detailed now, thanks to the GBA tilesets. Like Ruby / Sapphire / Emerald, everything is in vibrant colour, and small details help sell the world, including the more elaborate battle screens, clearer diegetic UI, and bigger, better sprite art. That said, no real changes have been made to the region itself, so there’s very little to discover if you’ve played the original releases. Without that sense of discovery, it runs the risk of being reduced to a slow sightseeing tour; if you’re new to the game then I would hope it holds all the wonder and joy that Red / Blue held for me all those years ago. Unfortunately, it is undeniable that part of the audience for FireRed / LeaGreen is those who remember the originals and it doesn’t do all that much to draw that crowd back in beyond sitting there going “look, you remember me, only now I look shinier!”

Towards the latter part of the game you’re whisked off to a brand new addition for the region – the mini-region of the Sevii Islands – and you have a little island-hopping subplot to sort out before you head back into the main game. I wish it offered more than simply an utterly lacklustre distraction but really it offers little more than a place to grind and padding to lengthen the game. You do return to an expanded Sevii Islands in the post-game, which at least gives you something to explore and discover, and it’s comparable to the post-game of Ruby / Sapphire / Emerald but in reality both aren’t comprehensive and vast; they’re more like small bursts of extra gameplay.

Even the music is lacking in some areas, I think, and given the strength of Pokemon soundtracks, that’s a real shame. The GBA soundfont makes things absolutely more aurally interesting but in some ways the expressive charm of the originals is lost in all the bluster. The remade Lavender Town theme is, I think, the greatest casualty of the upgrade, losing all of the original’s chilling creepiness, despite the impressive work on it. The reverbing drums and oscillating whistles are awesome, but I think I prefer the simplicity of the old version for sheer spine-chilling eeriness. The traditional Japanese instrumentation does work wonders for beefing up the Pokemon Tower theme though!

Still, it’s not all bad. The saw wave bass in Pallet Town is an aural hearkening back to those halcyon days spent huddled up in bed hunched over a Game Boy screen, while the additions to the Viridian Forest theme work wonders to enhance that horrible oppressive feeling of inching through the dense woods – for a similar reason I’m also a huge fan of the remade Pokemon Mansion theme.

A good example of what I mean by it being too much though is perhaps in the Gym Leader theme. There are so many elements going on here – the hectic drums in the intro and the maddening, hammering runs behind the first melody that just keep returning throughout are utterly distracting. I know it’s supposed to be a big powerful fighting moment but I can’t say I’m a fan of capturing it that way. Some of the changes work mainly to alter the mood – a good example is Vermilion City. In the original theme the reverb-soaked synths gave off a kind of high-energy positivity, while this newer version is much more sedate thanks to the softer whistles at the core of the melody.

The big question on my mind when replaying FireRed was “who is this for?” Without a doubt, players new to the franchise. With no prior experience of Game Freak’s series I’m sure it can absolutely be a charming and fun game. For veterans of the series, it perhaps offers a quick nostalgia hit, albeit one updated for modern sensibilities. For me though, I can’t quite ever get that excited about FireRed / LeafGreen. They’re certainly good Pokemon games, that’s for sure; the mechanics are as solid as ever, and the presentation is better than ever. I suspect I’m too stuck in my love of the originals to ever find these remakes perfectly resonant, possibly because they make quite clear some of the faults of those early games. 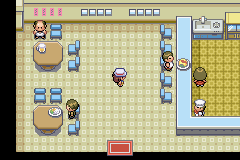 One thought on “Pokemon FireRed / LeafGreen”