One of the first sights you come across in Dishonored: Death of the Outsider is a slaughtered wolfhound on a makeshift altar and a diary detailing a former Bigmore witch despairing at the loss of her magic. It’s weirdly poignant, and along with the gritty and grey hues of the opening of it paints a grim picture of what is to come. This is the end, it says, so let’s settle in for the finale of Dishonored. 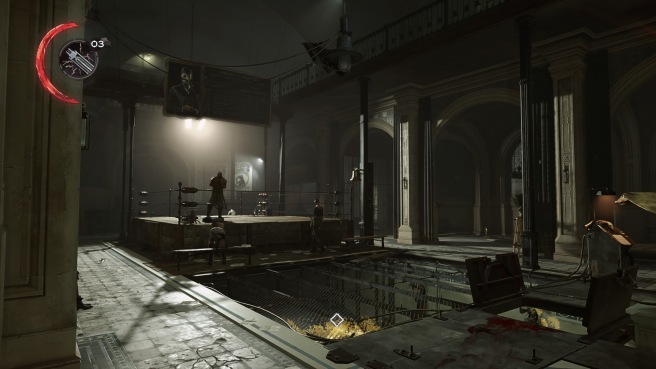 Dishonored: Death of the Outsider (PC, PS4 [reviewed], Xbox One)

For this last outing into the Dishonored world, we are Billie Lurk. She’s been a part of this story for a long time; she helped Daud murder the Empress in the beginning of Dishonored, she’s been there to betray us to Delilah during The Knife of Dunwall, and she cut a sullen and sorrowful figure as she guided Emily and Corvo during Dishonored II. We finally step into her shoes in this installment, as she searches the streets of Karnaca for her former mentor, Daud, and follows his mad quest to finally kill the mad god at the centre of all things.

The story concept here is definitely strong, though I feel like the execution is probably the weakest in the series. The idea of rescuing Daud and taking up what seems like a fool’s errand to kill a god is very cool stuff in concept; on top of that, Daud’s return is very much welcome, given he’s already a fan favourite character as well as being brilliantly voiced by Michael Madsen, who gives us his best grizzled, weathered, and dying rumbles. It’s powerful to see events through Billie’s eyes finally, and we can easily sympathize with her shock at the toll taken on the now elderly and crumbling Daud; like Dishonored II and Sokolov, Billie continues to see every person of significance and power in her life slowly wither away in front of her.

It all helps Billie cut quite the tragic figure. It’s not just about the slow death of her mentors, but across the series we have seen her fall so far and so hard. It speaks volumes about the strength of her character that it doesn’t break her, though perhaps a cynic might argue that her stoic, rough-shod attitude is tired and dull. She certainly reacts pretty well to losing her eye and arm to the Outsider’s magic, giving it a few passing remarks before adjusting.

Speaking of that eerie chap, naturally the Outsider is the other major character at the heart of this game. Always an enigma, the Outside this time seems very different; we have seen him be cantankerous, vindictive, and always mischievous, but this is the first time we see him vulnerable, or at least certainly not in control. There’s a big effort made to humanize him and to establish his backstory; however, some of this requires the player to be familiar with supplementary material. Speaking as someone who hasn’t read the tie-ins, it was hard not to feel a little lost – Death of the Outsider has some interesting backstory but it feels somewhat obliquely conveyed, which hampers its effectiveness. 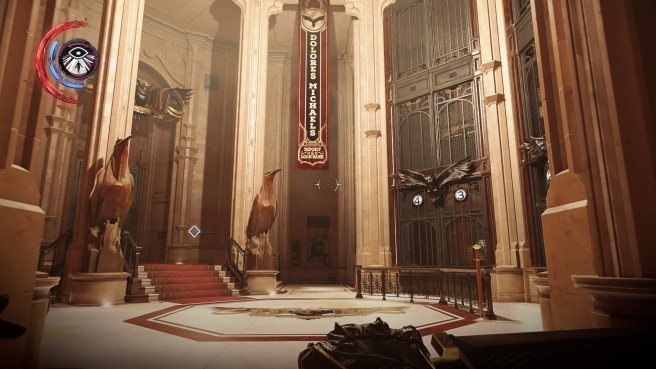 Death of the Outsider is mechanically sound but not especially different to the other Dishonored games, so veterans of the series know broadly what to expect. You’re popped down in an expansive environment, given a goal to accomplish, and left with more or less free reign to get on with it. Only one mission gives us a target with lethal and non-lethal options to deal with them as the core goal for the mission; it feels a bit of diluting of the concept at the centre of the original Dishonored game, and which made it excellent. I confess to feeling a bit lost at numerous points in Death of the Outsider; the 2nd level takes place in the wealthy Cyria Gardens district of Karnaca and it is vast – I think it is probably the biggest single stage in Dishonored so far. That’s cool and all, but it made me feel a little paralyzed, a little like when you drop into a huge open-world game and have no idea where to go or what to do.

Despite their size, the stages in general feel a little less tightly constructed than in previous entries, and there definitely feels like far fewer chances for the stealth to “flow”, forcing the player to take more risks. Combined with the higher number of guards posted around, it results in more instances of player death as you bugger things up more often. In fact, the game feels notably more difficult compared to the earlier games. Harder enemy types are more prevalent and the higher concentration of guards makes stealth tougher to pull off. These are acceptable challenges to throw at players, but some are harder to defend, like the layout of levels forcing players into risky plays and breaking up stealth options. 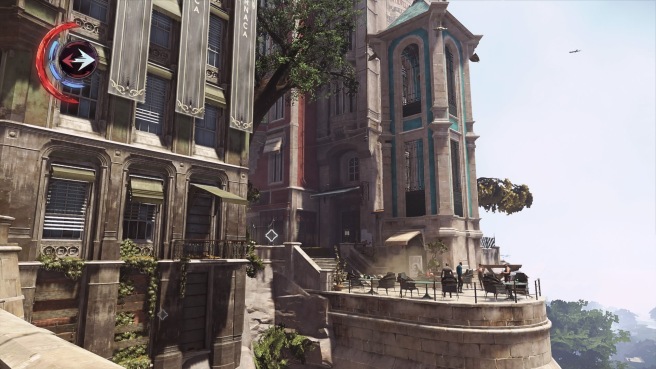 At least you still have some powers to help Billie traverse the levels and overcome their challenges. The Outsider bestows three new powers upon Billie, all of which function similarly to ones we’ve seen before but with odd new twists. Semblance copies an unconscious person, allowing Billie to move freely around without arousing suspicion, though faster movement drains her mana very quickly. The copying comes in the form of literal face-stealing, which has a deeply gruesome look to it, leaving a chars and burns where the unlucky victim’s face was. Foresight is a new take on the standard Void Sight powers, letting Billie see through walls and look at enemy placement, though this one stops time and lets a phantom version of you dart about the level – you can also place markers to Displace – this game’s version of Blink – to, though it’s a bit finicky. For some reason, Billie can talk to rats and they give her obtuse hints about the level; there’s not really a good reason why this happens given it’s before she gets any powers, but it certainly feels on-brand.

One of the big changes is that the series’ signature Chaos system is gone. It still tracks stats like stealth and deaths you cause, but it doesn’t matter in the slightest in Death of the Outsider; Billie is not as influential as Emily or Corvo, after all, and so whether she’s murderous or not makes no difference in the grand scheme of things. I noticed at least one tiny thing at the start, like Daud killing or knocking out his captors when freed depending on your Chaos, but that’s it; the only thing your actions have any effect on is the ending, which offers a binary choice which hinges entirely on your last choice in the game. I understand the reasoning concerning Billie’s lack of influence but it still feels disappointing to see it cut. 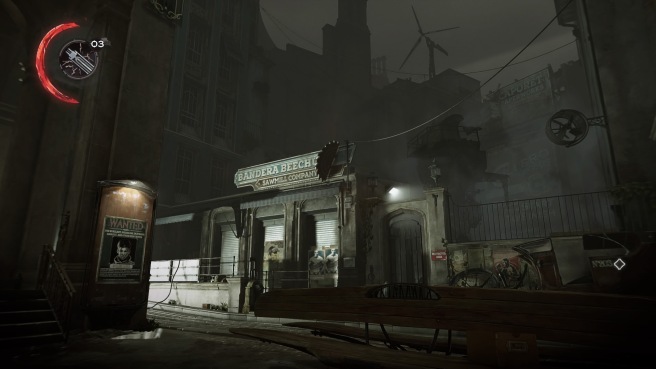 There’s also no runes to collect and no upgrading of powers. What you get is what you get, with one set point in the plot which upgrades your options, stripping away your options to roleplay and to choose, which have been key elements of the series thus far. You can still oover up bonecharms for passive bonuses, and charm crafting returns though I never found any use for it whatsoever. You are positively showered in charms during the game and you can simply find an array of powerful abilities to equip. Along with the loss of the Chaos system, once you remove the mechanically interesting bits of Dishonored you’re left with a solid but sort of vapid and empty stealth game. 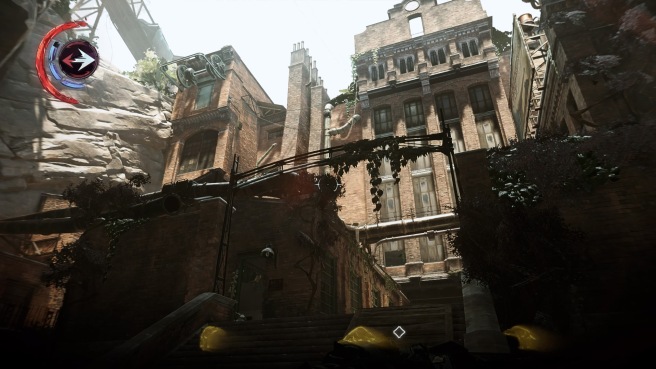 Because of the focus on the Outsider, obviously this game engages with the concept of the mysterious Void a little more than the others. Though all of the franchises’ protagonists visit the Void at least once during the games, none see it quite like Billie; she is, after all, the only one actively trying to get there. Cults built around the Outsider are nothing new to Dishonored’s world though Lurk goes looking for the most organized one we’ve yet seen. Unfortunately, though we see far more of this side of Dishonored than ever before, Death of the Outsider doesn’t really offer much in the way of answers. I suppose, that’s fair, given Billie isn’t after that information, but it feels a bit dissatisfying as a player who is invested in the series’ lore.

An unavoidable fact encroached upon me while I was playing Death of the Outsider: I wasn’t really having that much fun. I don’t like that, but it ought to be acknowledged. I love the series, and I’ve loved playing the games but Death of the Outsider was a real slog. For the first time with Dishonored, I found myself forcing myself back to the game, constantly reminding myself that it is shorter to keep myself coming back. The higher difficulty, missed narrative opportunities, and listless levels all drained my enthusiasm; realising the Chaos system was out and my powers were reduced both helped to sap away at my enjoyment as well. I really wanted to like Death of the Outsider, and I kind of do, but it was definitely the weakest time I’ve had with a Dishonored game. It is very much playable – mechanically, and quality-wise it is still a Dishonored game and Arkane knows their business, but it’s drawn thin by this point. Perhaps the ending was too long in coming.