For someone with a staggeringly huge backlog like me, replaying games can be a daunting proposition. There’s always that sense of failing to make progress looming over time spent replaying games, as daft as that sounds. But sometimes you simply cannot ignore that nagging voice in your head which compels you to play something again. Red Dead Redemption is an odd one for me though, as when it first came out I really didn’t enjoy it. Still, something in my mind was raring to give it another whirl, so let’s take a look.

The year is 1911, and the Old West is dying. Among the preening dresses and sharp suits of the sprawling city of Blackwater strides a rugged, dusty, scarred old cowboy. John Marston is a man on a mission, though he doesn’t want to be. As he boards a train bound for the tiny town of Armadillo which squats in the middle of the New Austin deserts, the presence of glowering Federal agents on the platform is unmistakable.

Marston wants nothing more than to settle in life as a rancher with his family. However, his past has caught up to him and now he is being made to pay a heavy toll. In another life John was a member of the infamous van der Linde gang, and as an outlaw he terrorised the lives of those trying to eke a living out in the American West. John may have long since left the gang, but he finds himself dragged back in when his wife and child are kidnapped by the US government and held to ransom until he kills or captures the few remaining members of the gang left running wild in the West.

Red Dead Redemption was received with an inordinate amount of praise on its release, and I personally think that was largely down to its writing. Rockstar did a remarkable job with crafting the characters who inhabit this world, and it’s no surprise it drew such acclaim. Almost absolutely everyone in the world seems to be a right bastard but John is seen by all as a hypocrite for hanging onto his own brand of morals despite his past as an outlaw in a gang which terrorised the region. He constantly maintains the morality of his actions, painting himself as a Robin Hood-type figure, but even the local drunk gun-peddler calls him out and brings him to silence. Throughout the game there’s a constant sense that John is itching to give in to his baser nature and simply start gunning people down until he gets his way, particularly once he realises that the various quest-givers he needs to interact with are all stringing him along for their own ends, knowing that once he gets his man then he’ll be gone. Regardless of the death of the Old West, it seems a gunslinger as proficient as John is still in high demand, albeit only as a tool.

I said the rest of the cast are mostly horrible gits, but perhaps the better term would be “nuanced”. Every person you come across seems to find a new way to disappoint John – were he any more jaded he would be ensconced in a glass case in a museum somewhere – but they also all work to reflect the changing dynamic of America as the 20th century rolls unstoppably onwards. The haggard old Marshal of Armadillo seems upstanding at first, but events reveal a marked ineffectiveness – he can no longer simply be a cowboy defending his town but has to bow to government pressure; John also sees him as a tool for government-sponsored murder, but one who chooses to be so unlike himself. It’s the same story for most of the characters – upstanding members of the law are shown to be as corrupt and awful as the criminals they fight, and others simply swindle their way through life to survive at the cost of everyone else. It’s telling that John takes pity on a snake oil salesman; he might be a crook, but he’s a harmless relic of times gone by, and so John sees him as a similar soul to his own. 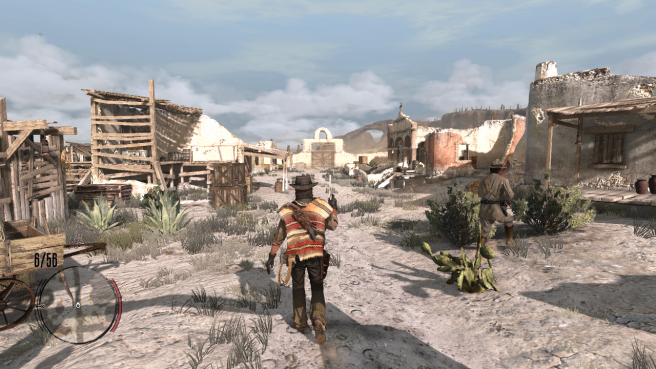 Outside of the writing, the gameplay runs quite similar to Rockstar’s other darling franchise, Grand Theft Auto. Grand Theft Auto IV predated Red Dead Redemption by only a couple of years, and in some respects the two are sister games. Both are dark narratives about blunted antiheroes who can’t escape the reach of their past, but also both feel quite alike to play. Red Dead Redemption drops you into an expansive open world which covers a fictionalised portion of the American West. New Austin is a vast arid desert in which ranchers and oil drillers try to earn a living; a vestige of the Old West, it is a slowly dying region which is slowly being overtaken by the railway lines which bring so-called civilisation to the area. To the south, Nuevo Paraiso is a Mexican state locked in a war between the government and revolutionaries, and to the east is West Elizabeth, a far more lush territory of rolling plains and thick snow-covered mountainous forests, at the far edge of which expands the city of Blackwater.

For a game over a decade old, Red Dead Redemption still looks stunning. Sure, there’s some wonky textures, but the graphical fidelity on the character models is still great, and the harsh, raw reality of the world is captured excellently – like the Fallout games, there’s a beauty in the bleak expanse of the West and I love it. On top of that, Red Dead Redemption employs some dramatic dynamic weather effects to bring life to the West. An early game area gives you a stunning view over the endless desert expanse of New Austin, but when storms and fog roll in it clings to the mountain sides and obscures the view; it honestly is breathtaking. 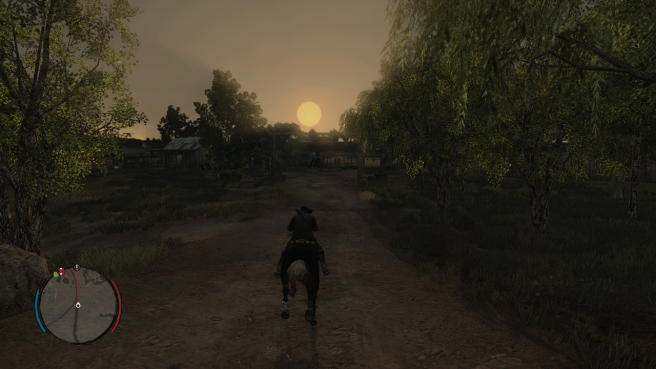 Once you get down into the world though, I have to say playing Red Dead Redemption felt a little flat. I much prefer the way the open world functions here than in, say, a Ubisoft title – there’s no need to climb viewpoints to uncover the map here, and nor are there endless collectibles and non-quests spread across the world for you to check off. Instead, Red Dead Redemption follows that typical Rockstar model of giving you markers for whichever character has a main quest for you and then lets go of the reins. This can, naturally, be paralysing for some players, and to combat that the game does provide some means of sculpting your play sessions.

For a start, there are a series of outdoorsman challenges which ask the player to hunt specific animals or pick certain flowers. They don’t seem entirely in-character with Marston, though I suppose you could read it as him being a survivalist, and nor do I find them especially interesting. Marston also has a set of outfits to unlock, which each come with unique perks. The checklist of things to do for each unlockable outfit is similar in nature to the survivalist challenges, and every one has an extensive list of activities to be done in order to earn it. Some of these are alright, such as asking you to clear out gang hideouts and such, but all have at least one or two tedious non-activities to cross off. It reminds me of playing Assassin’s Creed III and having to play the miserably frustrating games on the homestead, and Red Dead Redemption pulls the same shit, such as forcing you to play the dreadful horseshoes games or whittle away the finite hours of your life playing in-game poker. 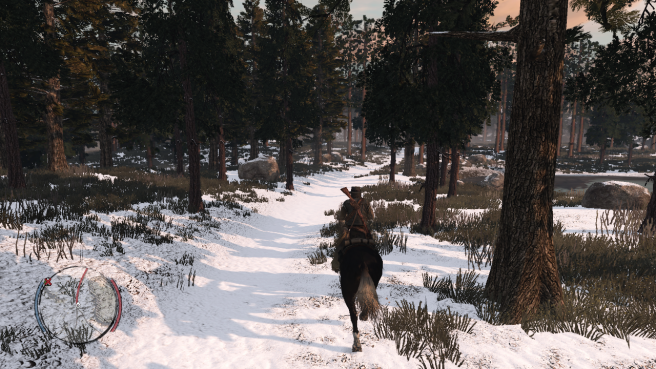 For a game built around being a gunslinger, the actual gunplay is disappointingly weak. There’s a huge and frankly necessary reliance in the game on auto-aim and lock-on, so the strategy for most fights boils down to hitting the aim button until Marston locks onto an enemy and then flicking the reticle sharply up to score an instant headshot with very little effort. Speaking of the reticle, I really hate it – it’s absurdly tiny and sometimes you find yourself having to squint to see it, further necessitating the handhold aiming. While you can accrue a plentiful supply of weaponry, none of it has much weight, leaving you plinking away at enemies without really feeling that powerful.

The gameplay outside of the main missions also runs the risk of being considered insipid. I love the weirdness of the Stranger tasks – sidequest chains which see Marston interact with some of the West’s odder folk – but the actual design pattern to them is dull. More often than not they’re just travelling tasks which require you to go somewhere and talk to someone; at worst they ask you to gather shit from the world which is essentially just busywork.

Though I happily praise the writing, the game is a little too self-indulgent. One of my biggest gripes the first time I played it (and indeed one which has survived this replay) is against the prevalence of missions which require you to travel with someone and have dialogue spewed at you for literally minutes at a time. Because it often happens while you’re riding or on a cart it’s technically in-game but it’s only pretending to be interactive; in reality you’re just watching a cutscene with some additional steps. As good as the writing is, it still strikes me as being poor design to force or require the player to sit around and listen to other people wax lyrical, and drawing attention to Marston’s equal impatience doesn’t make it right or worth it.

Other small annoyances serve to dilute the enjoyment to be had in Red Dead Redemption. The movement feels quite bad; Marston lurches and sways around like a constant drunk (except when he is drunk, where is worse but understandably so) and he feels sluggish, like he is moving his body through molasses, and horses snag on everything they can, routinely getting stuck behind rocks or on otherwise innocuous bits of scenery.

I can let a lot of these grumbles slide though predominantly due the quality of the characters and narrative. I’m a big believer in the idea that even if gameplay that isn’t entirely up to par, excellent writing can save a game, and that’s what made me largely enjoy my time with Red Dead Redemption, particularly on this replay. It’s hard not to sympathise with John; he cuts such a tragic figure as he fights desperately to see his family again. Knowing that he is part of the culling of the Old West is a hard-hitting emotional ride, and one worth coming back to. 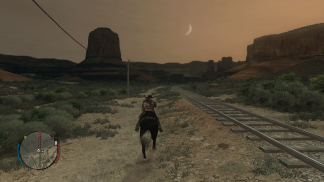 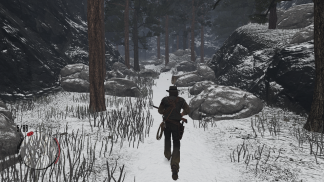 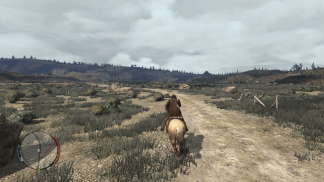 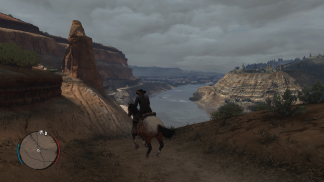 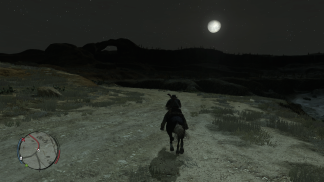 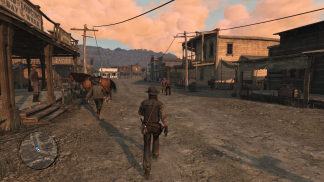 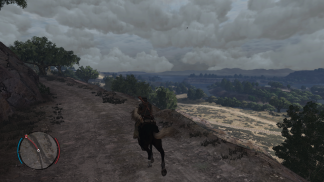