If there’s one thing the labyrinthine lore of Kingdom Hearts needed, it’s a prequel. 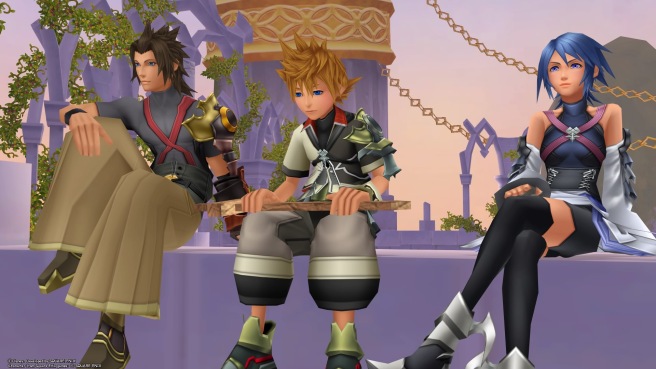 10 years before Kingdom Hearts we join Terra, Ventus, and Aqua, three young students of the venerable Keyblade Master Eraqus. Terra and Aqua are both ready to take their Mark of Mastery, an exam which, if passed, elevates them to the rank of Keyblade Master and allows them to take up the mantle of guarding the worlds from the forces of darkness. Aqua passes but Terra fails due to the darkness in his heart; such is his angst that he stomps off to fight the darkness plaguing the universe on his own. Muddled into this is Ventus, a young lad who looks identical to Kingdom Hearts II alum Roxas for reasons unknown, whom the others look upon as a little brother. Distraught at Terra jetting off, he also runs offworld to track down the wayward Keyblade wielder. Finally, Aqua is dispatched to bring them back.

Unfortunately for all involved, this mess was orchestrated by Master Xehanort, a fellow Keyblade Master obsessed with darkness. An old friend of Eraqus, he’s invited to view the Mark of Mastery exam despite looking objectively evil and cackling like a supervillain all the time. Although the other characters are oblivious to his meddling, the game is quite happy to show us he’s been manipulating the darkness in Terra to make him run off and set the events of the game in motion. 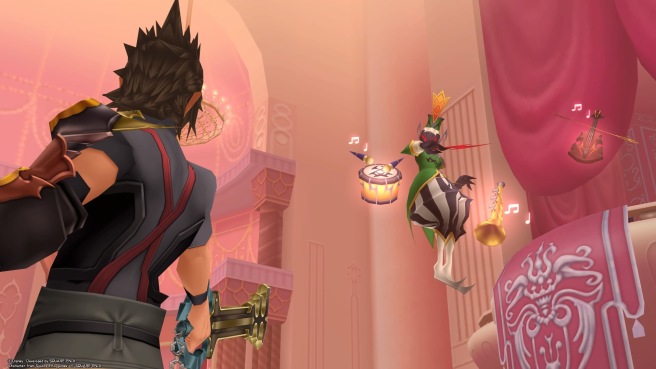 Our three leads are put into close examination by the format of the game. Birth by Sleep’s unique selling point is that we play as all 3 of Terra, Ven, and Aqua across 3 separate campaigns. Terra is as dense as a concrete slab – an awful lot of his story takes place chiefly because he’s extremely easily manipulated as he struggles to balance his wish to be a hero with his inner darkness – and this being the Kingdom Hearts world, that inner darkness is both very literal and very dangerous. Ven is young and jumpy, prone to emotional outbursts and insecurity; he can’t remember anything about his past but that of course proves to be a hook for Xehanort’s machinations as he sends his apprentice, a sneering masked boy, to hound Ven with clues about his earlier life.

Aqua, as befitting the only one of the trio to reach Master status, is a lot more calm and sensible. Her flaw is being too uptight, and her single-minded commitment to her mission is what brings her into conflict with the others. She is at least the closest thing the game has to a proper hero though, and her earnestness is what helps to stand out above the mopey Terra and the tropey Ventus. Together the three fit into the usual RPG archetypes of warrior, mage, and rogue; Terra is built around physical attacks, and has an affinity for Earth and Dark magic, Ventus is quick and nimble, and comes pre-kitted out with Aero spells, and Aqua is the least physically imposing but has much better magic stats than the other two. 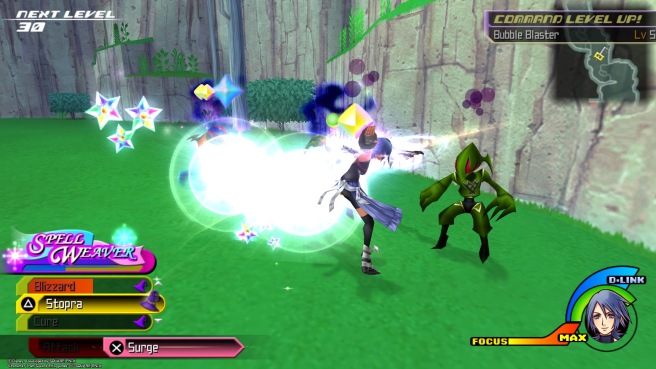 As with all non-numbered Kingdom Hearts games, Birth by Sleep likes to change stuff up from the standard set by the first and second games. For a start, there’s no constant menu of Items, Magic, etc. Instead it’s populated by the player with Commands. These Commands cover all of your actions, from special attacks to magic and equipped items. They can be freely cycled through during gameplay using the d-pad or (more helpfully) the right and left triggers, and they also automatically cycle as you use them. Once used they can’t be accessed again until they recharge, with more powerful Commands needing longer to do so. Additionally, players can equip passive commands tied to movement, such as more effective dashes or jumps to aid in platforming. Some of these can be stacked for even greater mobility options.

Commands can be gathered from treasure chests and purchased from shops, but also by melding, which is this game’s equivalent to synthesis. Commands gain experience as they’re equipped and once they’re maxed out often their best use is to be melded with other commands to forge more potent ones. There’s some apparent logic – for example combining 2 versions of a spell together gets you a more powerful iteration of it (e.g. Fire + Fire = Fira) – but sometimes though it feels quite hard to predict what you’ll get. That might put some off, but for me it mostly encouraged experimentation 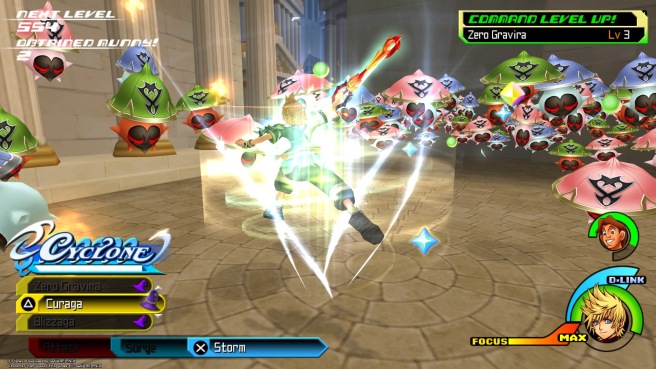 You can also chuck in special synthesis materials when you meld in order to craft Commands with attached Abilities. These materials are widely available as drops from enemies and found in chests, and I rarely found myself at a shortage. Each synthesis crystal can attach a range of potential Abilities, so once again it introduces an element of randomness to melding, meaning you might end up with Abilities you already have. Thankfully though Birth by Sleep lets you stack Abilities, so you can have multiple Fire Boosts at once for example. Once a Command is mastered, the Ability becomes permanently attached to your character, allowing you to swap out the Command without losing it.

Each character makes their way through Birth by Sleep’s story alone, so there’s no real party system in place like in previous games. Instead you can forge Dimension Links with certain characters as you progress through the story. When your Link gauge is full you can activate a Link with a character and it changes up your Commands to a specific set of actions themed to them – for example, Aqua’s Link replaces your Commands with a host of spells – as well as giving you special themed combo finishes. While Linked, there’s a chance that enemies will drop a special pickup which levels up your Link; this can happen twice per Link character and each time adds a powerful passive bonus while Linked. I’m not a huge fan of the randomness of this, as it can take ages or no time at all to get the power-up. 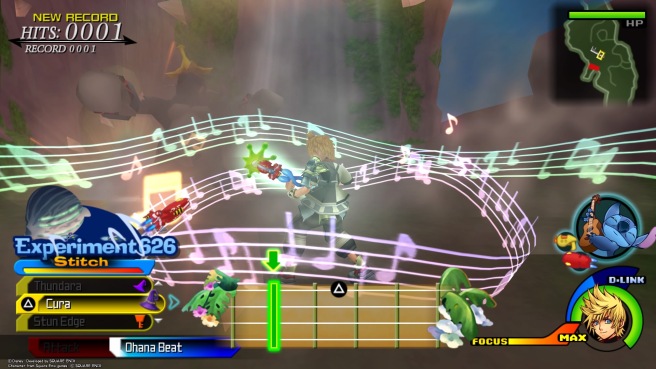 As you fight, a combo bar fills up; when it’s at maximum your character can unleash a powerful finishing move. There’s a huge variety of finishes to unlock, each with its own specific requirement to do so, ranging from beating a set number of enemies to collecting Munny. Some later finishes are extremely powerful, so you’re well rewarded for unlocking them. Some finishing moves are shared across all 3 protagonists, but each character also has access to completely unique lines of finishers as well.

The combo bar serves another purpose though: if it is filled up by fulfilling certain conditions, characters can enter a new Command Style, which resembles the Drive Forms from Kingdom Hearts II in that it alters how your character works in combat. For example, if you fill the bar by using Fire elemental attacks, you activate the Firestorm style, which has entirely new attack animations, gives all of your attacks Fire-elemental properties, and also comes with its own unique finishing move. What’s better is that these styles can stack – if you’re in a first-stage Style, you can fill the combo bar again with new conditions and enter a more powerful second-stage Style, and so on, with each new stage getting harder to reach as the combo bar depletes faster. This can give combat a frenetic, arcade-like feel as you try and set your Commands up in such a way as to access higher-level Styles for the power boost that comes with it. 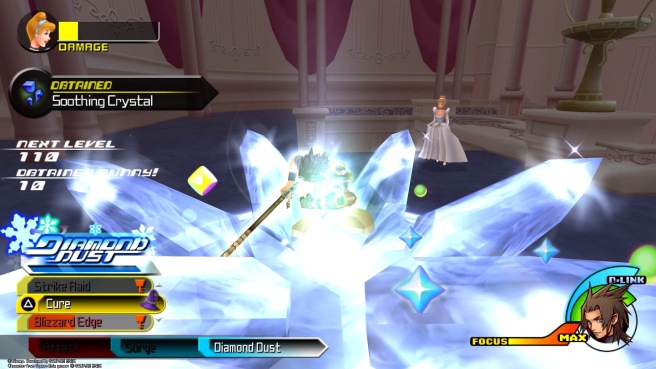 One addition I’m not so impressed with is the Command Board, which is essentially a kind of board game which can be played in order to unlock new Styles and Commands. I think it’s potentially a very powerful tool for players who can get into it as it can give you access to some good rewards, but personally I hate it; it’s mind-numbingly tedious to play, and I really hate AI-driven board games – it always feels like the game can cheat you out of good rolls or results at any time.

I’m always a fan of Kingdom Hearts music, and Birth by Sleep is no exception. Tears of the Light brings out Shimomura’s now-expected mastery of crafting solemn and heart-rending pieces of music; once that glorious violin soars over the piano and strings you know you’re in for an emotional time. Our protagonists’ themes naturally reflect them well. Terra has a notable minor feel to it, compounded by powerful, almost militant, percussion, and as the strings change notes they do so with sharp and curt movements, unwilling to bend and give. I love that the piano lines in Ventus recall Roxas’ theme from Kingdom Hearts II, but with its own unique evolution which conveys both his bright countenance and his tragedy. Aqua’s theme, in contrast to the lighter moments in either of her friends’ themes, leans entirely into a sombre sadness. In the same vein as Ventus’ theme, Enter the Darkness is a battle theme which samples Roxas, Ventus’ and even Sora’s themes, merging them all along one fantastic pumping rhythm. The use of the different leitmotifs is a fantastic example of music and composition as a narrative tool, brilliantly creating the sense of the past, present, and future of Kingdom Hearts colliding. 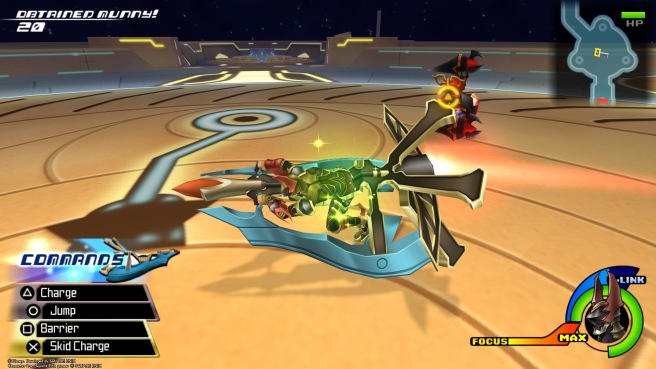 The level design reminds me of the first game in that it’s a return to the far more vertical and spread out way of designing rooms, and requires you to do more platforming in order to get every treasure chest and secret. Something that strikes me as a holdover from being a PSP game originally is that the rooms can sometimes feel a little bare, and though levels aren’t often very long, there can be some significant downtime between encounters or finding collectibles, presumably because the PSP couldn’t handle huge amounts of either. It’s not a major problem at all, but the move to home consoles and being placed alongside more technically impressive games in the franchise does give a stark sense of contrast between them.

We don’t get any Heartless showing up in Birth by Sleep, but instead our heroes are beset by a new enemy: the Unversed. These are functionally the same, and a lot of the designs are reminiscent of Heartless we’ve seen before, but I do some of the quirks they bring. The basic Unversed have none of the cuteness of the Shadows but instead look like demented rodents; whereas Shadows sank into the floor to avoid attacks, these whip about erratically and fluidly, effortlessly molding their form to dodge. There’s not as big a variety of Unversed to tackle but that’s to be expected; again, though Birth by Sleep has seen PS3 and PS4 re-releases, it’s still a PSP shell despite the additions. 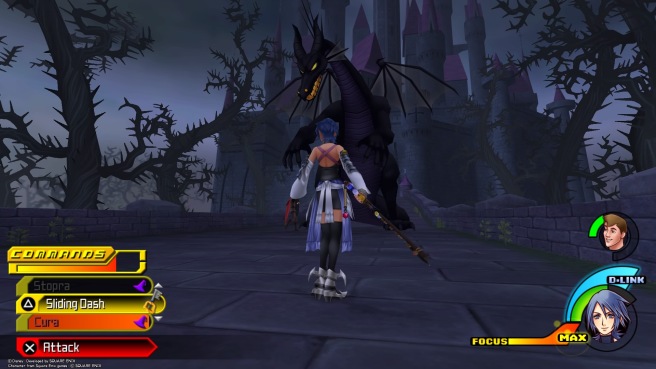 I must say I do still think Birth by Sleep stands as one of the stronger additions to the Kingdom Hearts franchise outside of the main games. It clearly builds on the strengths of Kingdom Hearts II, with the limitations of the PSP only holding it back a little. The repetition of playing the 3 campaigns can feel tiresome but in its entirety it’s no longer an experience than one of its console counterparts. Getting a chance to delve into the history of the series’ universe should be draw enough for fas of the lore, and there’s a very solid game in there as well. 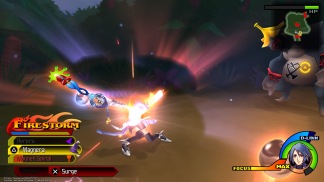