I have a real soft spot for the hard-boiled grim detective trope in narratives. There’s something almost mystical about that image and its portrayals in games – from the cynical poetry of Max Payne’s dialogue to the jaded ultraviolence of Booker in Bioshock Infinite – tend to result in some of my favourite characters in gaming. The Vanishing of Ethan Carter adds to that pile Paul Prospero but takes some interesting and engaging twists to keep players invested in the journey. 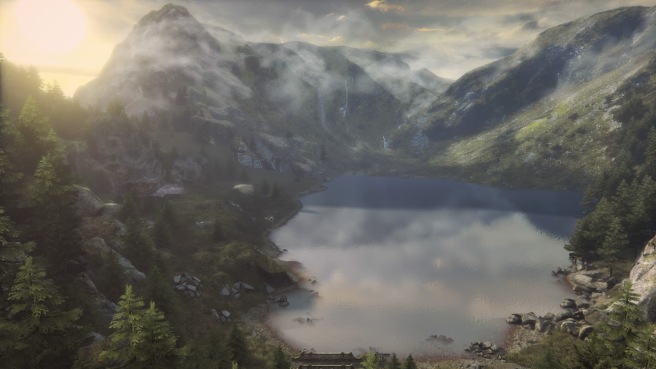 Prospero hits every noir cliche he can. A grizzled voice, his seen-it-all attitude, the weary resignation that this is his last case before he calls it quits, and wonderfully flowery prose; he’s got it all. After receiving some strange mail from a 12-year old fan called Ethan Carter, he travels to rural Wisconsin to seek him out; as he arrives, he finds Ethan’s village of Red Creek Valley deserted and goes off in search of him. Often I find a lot of the fun in the noir setting is seeing it transplanted into a setting that doesn’t quite feel right, and in this The Vanishing of Ethan Carter does a sterling job. As Prospero emerges from a lengthy tunnel road in the beginning of the game he finds himself in a deep forest and a tiny village clings to the mountainside in the distance. We instantly feel a little out of place and out of sorts as the dappled light causes stunning rays of sunlight to arc down upon the leafy floor and the gentle lapping of a lake’s idle ebb and flow causes the soft clicking of displaced pebbles bouncing off one another.

Then we step forward and a bloody spike pit trap opens up beneath us with a violent rush. 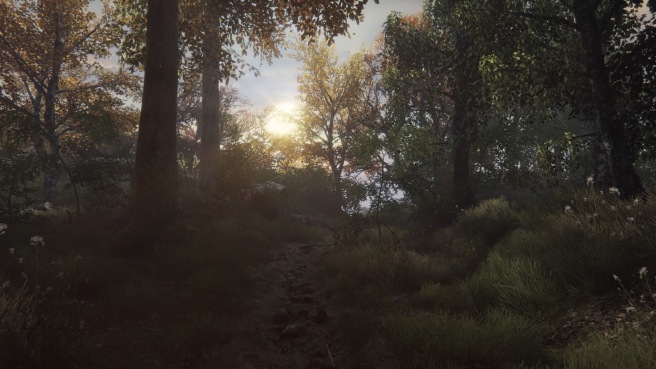 The tone of Ethan Carter is set very early on, then. Where at first glance the forest seemed serene and soothing, now every step is taken tentatively and admiring the scenery is replaced with careful scanning of the woodland floor for any other deadly hazards. A haphazard mess of leaves betrays the position of a bear trap poised to harm the unwitting but then a swinging log hurtles down as Prospero, and the player, are busy looking down rather than up. Emerging from the forest, players are greeted by a rotting and dilapidated bridge. At the far side squats a filthy old train car. A close inspection reveals it is spattered with blood. Prospero’s journey has taken a turn for the macabre as Ethan is revealed to be missing and the village is quiet and grave-like.

I admit that before going in I wasn’t expecting Ethan Carter to throw horror tropes at me, nor was I expecting the tense thriller atmosphere that slowly and inexorably descends. It isn’t a horror game per se, but developers The Astronauts have clearly found a way to differentiate their interactive narrative from others and to avoid the dreaded pejorative of “walking sim”. It’s billed as an open-world game but I’m not really sure I’d describe it as such. Each stage of the game is presented in large open areas and technically there seems to be contiguity between them, allowing you to backtrack and explore, but the game narrative is strictly linear and there’s little reason to go back on yourself. There are some small hidden puzzles that can be found by the diligent explorer but I don’t think that they offer much incentive to indulge. 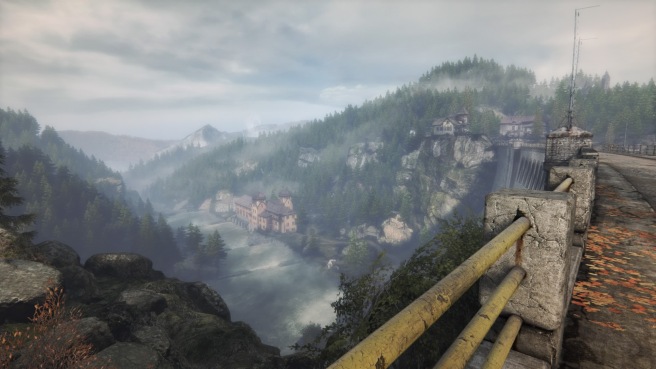 The primary interaction one has within the world of The Vanishing of Ethan Carter is finding stuff to look at, as is the wont of many a walking sim. Each area of the game has a murder to solve; Prospero can find objects related to the murder around the area and use an innate ability to sense in what way they were involved. Ethan Carter isn’t afraid to invoke the supernatural in its bid to increase the tension and tap into the innately uncanny valley feeling of deepest rural America, and it works marvelously. Once all the objects are found, Prospero can mentally reconstruct the events to work out what happened – I’m reminded of the detective vision in Batman: Arkham Origins, but infinitely more stylish.

There’s a secondary framing narrative at work here as well that’s centred around Ethan’s stories. Each location in the game has a puzzle to find and solve; these puzzles are adjacent to the murder-mystery but inextricably linked to the enigmatic character of Ethan. Through his writing we come to know what seems to be a young lad with a vivid imagination but whose sheltered and dreary life has given way to a twisted, darker side which he channels into creative stories. The puzzles to earn these glimpses are naturally limited by the lack of interaction in the traditional sense of games that comes with walking sims but they manage to be no less intriguing for it.

The landscape on display here must also be considered one of the biggest draws. It is absolutely stunning. Obviously game graphics get better and better with each passing year but you’d be forgiven for thinking this was more modern than a 2014 release. The developers reportedly drew a lot of inspiration from the Karkonosze mountain range in their native Poland and used photogrammetry to capture the range’s feel and look before modelling the Red Creek Valley from it in the game. The result is a truly gorgeous game that demands your attention every step of the way.

The music complements the game in an equally arresting way. Often delayed, stretched out melodies play at the edges of the tracks while unsettling ambience settles into the half-spaces between, and it’s difficult not to feel unnerved by it. Early tracks like Bloody Roots and The Legs Are Gone are sterling examples of Mikolai Stroinski’s work, with ebbs and flows of serenity and tension that holds you in their grasp. Stroinski also manages to capture an intangible sense of mystery in what might be the game’s stand-out piece of music, Valley of Blinding Mists, which swells with an aching, melancholic beauty as the melody moves across a series of lead instruments.

The only other walking sim I’ve reviewed on here is Firewatch though I have played a few others, such as Dear Esther and Stanley Parable. Walking sims seem to generally carry a stigma from players and so often I find each game labeled with that genre tries to add something different or unique to offer to the genre to differentiate and sometimes even distance themselves from it. The Vanishing of Ethan Carter is no different. Tense narratives centered around an unfurling mystery seem a favourite tactic employed by interactive narrative writers – a mystery and the landscape are all Dear Esther has to give for example, but the excellent Firewatch seems a more pertinent game to compare Ethan Carter to. Both take place in a similar type of setting, and both see a seemingly innocent story rapidly and expertly blossom into a stressful, unsettling story that draws you in. That said, Firewatch had the smart sense to embrace the “walking” part of a walking sim and turn it into an engaging hiking sim. Ethan Carter doesn’t really have that; wandering the world in search of the next nearby piece of the mystery is fun, but there’s nothing beyond that – every draw in the game is related to the narrative. Thankfully the plot is good, without a doubt.

I enjoyed The Vanishing of Ethan Carter, certainly, but can’t help being left feeling just a little wanting. Perhaps it was to do with the glowing reviews of it, or perhaps the movements of its story are not quite as groundbreaking or exciting as they might have once been. I do know however that it offers a few short hours of play – maybe around 2 or 3 at most – but they are hours packed densely by engaging, mysterious, and even sometimes darkly quirky writing that make playing it a worthy experience.