I have very vague memories of the original MediEvil. It occupies the same space as games like Terracon and Hogs of War, a slightly-obscure cult classic that I played but never truly invested my time into. I’d always meant to go back and give MediEvil a proper go but I’d never really gotten around to doing so; however, during Halloween it popped up on PS Now and so it seemed like no better time to finally play it.

As the camera pans around the world of Gallowmere, the quickest comparison which is drawn to mind has to be Tim Burton. Between the twisted fantasy and the light schlock-horror elements that are suffused with a dorky humour, MediEvil certainly feels like it draws heavily on Burton’s work. Even the game’s main character, Sir Daniel Fortesque, has shades of Jack Skellington about him: he’s a lanky skeleton with a good heart and a propensity to good-natured bumbling heroics, though unlike the Pumpkin King, Sir Dan solves his problems with a sword.

And what problems Dan has! The evil sorcerer Zarok has raised an unstoppable army of the dead and Dan is placed at the head of Gallowmere’s forces and leads the charge against him. With Zarok defeated after a mighty battle, Dan is hailed as one of the greatest heroes to grace the land. Except, well, unfortunately that’s not the whole truth.

Dan was actually killed as the battle began, shot by a stray arrow straight through the eye. With his ignoble end covered up by the King, Dan was celebrated as a hero and laid to rest in a glorious crypt. The game begins a century later as Zarok returns to Gallowmere, ready to conquer Gallowmere with a newly raised undead army. However, his spell accidentally resurrects a now decayed and skeletal Dan, who takes up his arms and armour once again in order to finally be the hero he meant to be and ascend to the glorious afterlife of the Hall of Heroes.

To do this Dan must journey across Gallowmere, fighting Zarok’s hordes and gathering enough strength and equipment to challenge the necromancer in his lair. MediEvil is an action-adventure game which pops Dan down into a variety of charmingly spooky levels with a few objectives to complete in each one. The stages aren’t necessarily about simply getting to the end, though; most instead need Dan to complete a task before letting him leave and progress. Players are encouraged to explore and interact with the world, though that perhaps makes it sound a little more grandiose than it really is; this is a PS1 game after all. Beating objectives helps Dan accrue more equipment, and in some cases Dan adds items to his inventory which are necessary for progress in later stages. None of these items are missable, but all seem to be needed, so merely fighting your way to the end of the level isn’t always enough and the game can require less diligent players to backtrack. This isn’t as laborious as it might sound though as the levels in MediEvil are all quite compact, making running back through them an easy experience.

I enjoy the creativity of the stages in MediEvil. Though you do need to fight off enemies all the way through, combat isn’t the core focus of the game and it means that the levels can be more interesting and varied, and players will find themselves needing to do all sorts of different things to progress. For example, one level requires you to solve a series of riddles to escape a maze, another is a gauntlet of fights, and one memorable example sees Dan traipse back and forth across a town of cursed people trying to gather disparate pieces of a puzzle. Combined with the brevity of the stages it makes for an experience which never outstays its welcome.

While you’re doing all this you’ll need to fight off enemies. Dan comes equipped with a rusted sword but it won’t be long before you upgrade it and gather more equipment. Some items can be found in the field, such as clubs and shields, but the main pathway to getting better armaments for Dan is to collect each level’s Chalice of Souls. Each stage has a Chalice which is filled by defeating a set number of enemies in that level; once collected, Dan travels to the Hall of Heroes and gains a new weapon or upgrade from one of the incumbents of those hallowed halls. The weapons Dan can get are nicely varied and have different utilities, such as the number of ranged options he can get his hands on, new swords, and weapons that in my experience became absolute mainstays such as the Axe and Hammer.

Each weapon comes with 2 attack modes, with the secondary fire often giving it more versatility: the axe for example can be thrown, while swords can be spun around to control crowds. Combat is not the most finely-tuned system in MediEvil. Dan mostly wafts his sword about aimlessly as you hammer the square button, and the automatic lock-on the game insists on is temperamental at best. You’re also guaranteed to get hit as you play MediEvil given the hitboxes seem unclear, meaning that collecting the additional life bottles which restore your health to full is all but mandatory. Despite the issues with the combat it’s by no means an especially hard game though; I found myself breezing through it, with any challenge coming from the occasionally dodgy controls as Dan missed a landing and slipped off into any one of the game’s many many abysses.

MediEvil does have some saving graces though, such as its design and its cheeky, charming sense of humour. I’ve already mentioned the game’s similarity to Tim Burton’s visual style, but that doesn’t entirely do it justice on its own merits. Gallowmere is a gorgeously creative world: from the noxious gases rising up in sluggish green swirls in the graveyards, to the threatening burnt umber skies of the foreboding cornfields, MediEvil’s world oozes a polished sense of style. I particularly love the twisted houses of the village you pass through which loom over the streets! It isn’t a scary game though, by any real stretch – it’s more horror-themed rather than actually part of the genre – and there’s an enjoyable levity to proceedings. It’s hard not to chuckle at the disparaging remarks made by Dan’s fellow heroes in the afterlife and the myriad gargoyles which serve as tutorials and merchants for the player and as walking fonts of sarcasm to our skeletal hero. In what is probably the best indication of how much fun Gallowmere was, it’s almost a shame to leave it after the reasonably brief time that MediEvil offers.

Still, this remake does try and keep your attention a little longer than the original release. There aren’t many changes Other Ocean deigned to make but they did add at least one major side quest. The hunt for the Lost Souls only comes into the game right at the endgame but it asks the player to backtrack once again through the levels to recover 19 missing Lost Souls and then perform a specific task for each one to lay them to rest. It’s a bit tedious to do, and it’s not a hugely creative way to extend the time you spend with the game, but given it unlocks a fully playable emulated version of the original PS1 release of MediEvil, some players might find the reward worth the hassle.

I do have some quibbles however. One of these was the performance. One enemy caused an astounding framerate drop; though drops here and there are not overly prevalent, they are notable when they happen. Textures struggle to load in with cutscenes sometimes, and it’s painfully obvious. The audio mixing is a peculiar one; it’s particularly an issue with the Hall of Heroes – when the statues of Gallowmere’s heroes speak to Dan, often it’s very hard to hear and they’re mixed so low against the music that subtitles are more or less mandatory.  The camera is also a constant pain. It’s often hard to control and the game likes to put Dan in tight corridors or rooms with no chance to move the camera.  On top of that, scenery elements can obscure the screen which often causes you to take needless hits.

The overriding thought I had coming away from MediEvil was that it felt like a very strange remaster. In hastening to preserve the original game, it seems Other Ocean neglected to update it. Contrary to what some people on the internet seem to think, old games are not sacrosanct, and it’s perfectly ok and sensible to correct faults and flaws that original games had. Regrettably that hasn’t happened with MediEvil, and instead unfortunate hangovers from this early generation of 3D gaming have been left in it.

Some of Dan’s responses to conversation doesn’t seem to match up with what’s being said to him, though given the eccentricity of the folk in question perhaps that’s the only sane response – that said, it does throw you out of the moment. Another relic of this past age of gaming which has been faithfully recreated is the fact that Dan’s health doesn’t ever refill between levels; if you scrape through a stage by the skin of your teeth and start a new one, you’re shit out of luck because you’ll probably see a game over screen quite quickly. This enforces a loop of grinding previous, easier levels for resources like health vials just so you can take on the next stage of your adventure; this loop also needs to happen for money, which is needed to stock up on ammo for your ranged weapons. There was a golden opportunity to address a flaw with the original here and Other Ocean completely missed it; it’s neither player-friendly design nor engaging gameplay to force players to make repetitive loops of stages simply to gather enough health to take on a stage. Instead simply refilling the health bar and making Dan’s life potions a resource you can purchase would have subtly modernised the design and made it more palatable to play.

I would think it’s likely though that those who hold MediEvil in fond regard can look past these issues and instead indulge in an old game faithfully recreated and presented with a stunning new coat of paint. New players would probably also find MediEvil enjoyable; it feels modern enough, it’s issues notwithstanding, and the fact that it’s a brief adventure means it functions as a respite from the increasingly huge games of the current age of gaming. Sir Dan’s quest was not one which I found myself raring to sit down and continue, but I found a quiet sense of contentment as I played through it. It never brought me to rage or bored me with banality, and instead seems to occupy a pleasant middle-ground of being quirky and charming enough to keep my invested, and for that it is deserving of a recommendation at least. 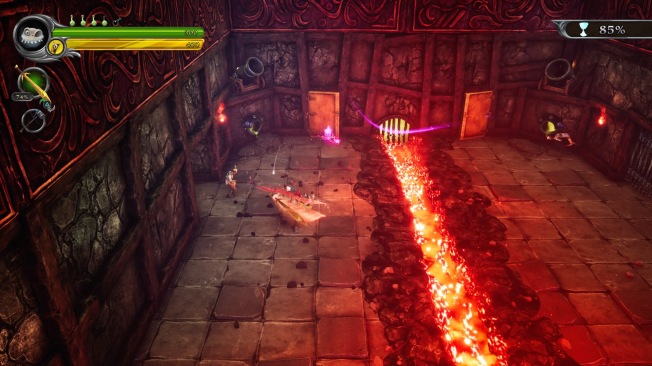