Given my less than wildly excited reaction to the previous two games, you could be forgiven for thinking there was little point of my going into Darksiders III. However, that’s not what I’m about! I’m always open to going into games even if I’m not entirely enthused by the franchise in the hopes that something good comes out of it. With that in mind, let’s check out this 3rd entry in the Darksiders series. 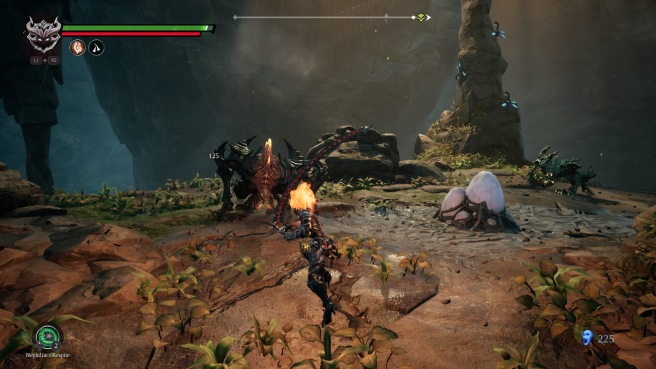 This time around Darksiders puts us in the shoes of Fury. As you might guess from her name, she’s a wee bit angry (like, all the time), and as the game begins she’s raring to get into action and kill stuff. To that end she is summoned by the Charred Council to dispatch the Seven Deadly Sins, primordial beings that embody the vices of the cosmos. They’ve somehow been released in the wake of the Apocalypse which War set off in the beginning of the first game and the Council wants them recaptured before they wreak too much havoc. Fury accepts the task with some relish and is beamed down onto the ruins of the Earth

I’ve given the series some criticism for the way in which it handles its narrative in previous games; in my opinion it trends towards bombastic spectacle but is largely devoid of any real substance, and often it’s a kind of overcomplicated, self-absorbed non-story about the Apocalypse. However, to its credit Darksiders III achieved something that neither of the previous games did: it gave me a story and characters that I actually cared about. It’s no masterpiece but I was definitely surprised at the arc which Fury underwent, developing from a one-note avatar of anger to a more complex character as she is confronted and tested by the Sins. I also found myself enjoying the character of Ulthane, a chap who appeared in the first game and begrudgingly helped War, but here we see him cut a more heroic figure as he works to gather and save the remaining dregs of humanity who have survived the onslaught of the forces of Heaven and Hell.

It’s a shame that the main villains of the piece, the Seven Deadly Sins, don’t offer much in the same way of interesting characters. I suppose the innate problem with basing character on the Sins is that they by default represent a single trait which is exaggerated to an extreme. There are a couple who are a little more robust, notably Lust, who here is figured not as the traditional embodiment of sexual desire but instead is about a lust for power, which is much more fitting as a foil to Fury than the alternative. There’s a token effort to make it seem as if Fury is guilty of falling prey to all 7 Sins but I don’t buy it; Lust for power, Pride, Wrath, and Envy sure, but I don’t agree with the game when it told me she’d been a glutton or slothful. That said, that the game even sparked that level of interest in me though is a huge improvement in my eyes, compared to the passivity with which I received the previous games.

As for the wider plot of the Darksiders mythos, Fury’s adventure also does some good work. Like Darksiders II this game is a prequel to the main body of the first game, taking place during War’s imprisonment for starting Armageddon early. As such, we see Earth at a marginally less ruined point in time, though it’s still pretty screwed. Disappointingly, the events which drive the majority of the plot – defeating the Sins – is largely inconsequential; what Darksiders III does well though is that it finally puts into place events which give us an idea of what might come to pass in an eventual Darksiders 4. That’s always a risky business since who knows if we’ll get a sequel but I feel like with what happens in this game, should there be one I’m almost ready to accept whatever big, overblown nonsense comes our way in it, particularly if it’s held up by the more robust writing which we get in this game.

In discourse online it seems that the gameplay is one of the more controversial parts of Darksiders III and it’s easy to see why. Like its predecessors Darksiders III has opted to reinvent itself but by reinvent itself I actually mean it’s cribbed all its stuff from Dark Souls. Whereas previous games had a wilder hack-and-slash core, Darksiders III offers a slower attitude to combat, one which needs players to be more methodical. Often enemies appear in ones and twos rather than in mobs, and attacks hit hard so players need to be ready to dodge and judge when it is safe to attack. When multiple enemies do appear and converge on Fury however she is armed with a bladed whip as her primary weapon, allowing her to swing and hit in a wide arc around her. Timing dodges just as attacks would hit slows time momentarily and opens up a powerful counter attack, which you have to get used to because there’s no way to block in this game. As Fury progresses through the story she unlocks a series of elemental forms which each come with an associated secondary weapon. I’m sure some people will find use for these but I personally used none of them; the whip was sufficient to deal with every enemy in the game.

That I said Darksiders III is based on Dark Souls will no doubt set alarm bells going for some folk, and rightly so. Here’s a confession: I’ve never really gotten into Dark Souls. I’ve played a little of the first game and Demon’s Souls, a tiny bit of Bloodborne, and even less of Dark Souls II. I’m no expert at all but even I, with my limited knowledge and experience of the series, can tell you roughly why people seem to like it, and what a game looks like when it’s copying Dark Souls badly, and I can tell you that Darksiders III is definitely a half-baked Soulsborne clone.

They got the memo about making combat hard given that some enemies knock off huge chunks of your health but despite that it’s not an especially difficult game. Attacks are massively telegraphed and it’s not exactly a cerebral system given your combat options are dodge and attack; that’s it, the formula for the game, dodge the hit and smack back. However, other major elements of Soulsborne games which form part of the core appeal are excised.

There’s nothing approaching the campfire system. You can find checkpoints and do business with the demonic merchant Vulgrim but it doesn’t revive enemies; the only way to do that is to die and respawn. You’ll know the levelling drill: beat enemies, get souls, spend souls on levels, distribute attribute points, but there’s only 3 stats to raise (HP, damage, and arcane) so anyone hoping for any depth to the roleplaying system will be disappointed. Additionally, I’m not sure what the point of the arcane stat is. I think it might make Fury’s super mode more powerful, but I stuck with strength and health all the way through and did fine. There’s a light metroidvania element to the world as it’s semi-open but you seem sort of funnelled down routes because you need certain elemental powers to clear paths. As you work your way across the Earth you’ll come across puzzles to be solved but they’re not very creative; you come across variations of the same one puzzle requiring you to lead a bug to explosive goop and then throw it to blow up a wall so many times across the game, with pushing a big block coming in at 2nd for most repeated puzzle. Despite the lack of depth on offer here, I’m compelled to say I didn’t hate Darksiders III – I actually quite enjoyed it. Speaking as a non-Soulsborne aficionado, I didn’t mind the stripped down Souls-lite combat; rather I found it refreshing, and much more engaging than the hack-and-slash stodge in the prior games; perhaps in a weird way Darksiders III could function as a gateway to harder and more engaging games.

That said, it can only function as a gateway if it works and I have a big, regrettable point to make here. Darksiders III is, without hyperbole, the worst performing game I’ve had the misfortune to play on my PS4. It’s definitely got to be up there as one of the most poorly optimised major releases on the PS4. Indeed, it’s no exaggeration to say that it’s unplayable. I powered through it, but I can’t recommend that you do. I frequently saw the framerate tank into the 10s with horrible juddering effect, and at its worst the game dropped into single digit frames per second. One memorable moment saw every enemy in one area fail to fully load in, leaving me fighting against stuttering foes which moved in single-digit frames before the sound gave out and the game crashed. The textures also routinely struggled to load in and hurriedly tried to catch up with the game; I’ve spoken to some friends who played it on PC and they reported that it’s been patched and runs quite well, so clearly that is the format on which to play this game.

That issue with the performance makes Darksiders III a very tough game to recommend and score. When it worked well, this was by far the best time I’ve had with a Darksiders title, though I’d hesitate to call it anything more than a good game. I appreciated the more robust character writing for Fury, and I even enjoyed the Dark Souls-lite gameplay, though I’d of course have liked a bit more depth across the game as a whole. That said, as someone writing a review I can only write about my experiences, and mine was one riddled with a seething anger at the sheer lack of quality taken on the PS4 release. If you deign to release a game for a platform, it had better bloody work and Darksiders III simply does not function on PS4. Therefore, what this game ought to be and by accounts is if you play on PC, is:

But what I played on PS4? I’m afraid it’s not even close. Don’t play Darksiders III on PS4. It’s simply unacceptable.