I’ve been waiting for this game for so long. The level of excitement I had going into Kingdom Hearts III was almost scary; Kingdom Hearts II is my favourite game ever, and the series has been consistently a set of games I return to, so to say it had a lot to live up to is a huge understatement. Let’s take a look then at this, the finale of the franchise’s first arc, and see how it fares. 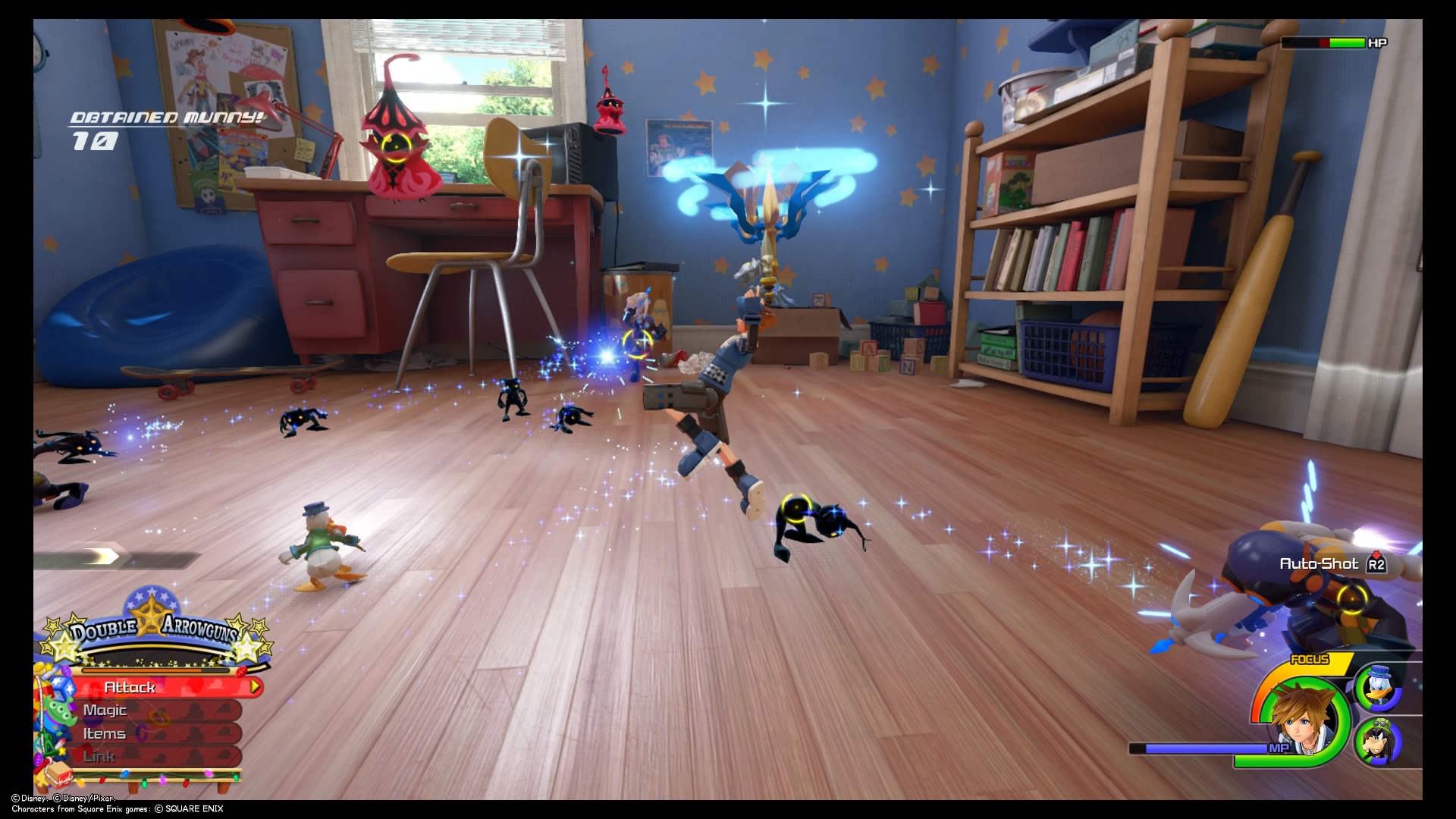 It feels inevitable that any review of Kingdom Hearts III should start with a disclaimer. If you’re new to the series, if you’ve just picked the box up because you think it looks neat what with the appealing anime styling of Square Enix and the colourful presence of Disney characters, or if you’ve seen some gameplay footage and think it looks exciting and vibrant: I hate to say this but I simply cannot recommend you play this game. I’m honestly not trying to gatekeep when I say Kingdom Hearts III isn’t going to be for you; rather I’m trying to direct you towards previous entries first. The reason for this is simple: Kingdom Hearts III is the finale to the “Dark Seeker Saga”, the culmination of 17 years of some of the most convoluted, labyrinthine JRPG writing ever, which to this day confuses and confounds even the most devoted fans. It’s an excellent, marvelous, amazing game and I loved it, but I promise you it is a breathtakingly baffling experience and I can’t see any way to enjoy or understand the tidal wave of twaddle that lead writer Tetsuya Nomura decided to drown the player in.

Where to even begin with Kingdom Hearts III? The villainous Master Xehanort has returned to the world and leads a brand new Organization XIII as he terrorizes the worlds in his quest to summon Kingdom Hearts and attain ultimate power. His plan is rooted in prophecy, and to fulfill it he needs his 13 Organization members to fight against 7 guardians of light. Thankfully Sora and the gang are ready to leap into action and defend the worlds. Regrettably they’re a few heroes short of 7, and so Riku, Mickey Mouse, and Sora go their separate ways to recruit their final fellow Keyblade wielders. If you’re not familiar with these names, concepts, or events, you run the risk of being lost and falling behind. The greatest of sequels are accessible even to new audiences, though of course long-time fans who’ve already consumed the franchise always stand to gain the most; in this respect Kingdom Hearts III fails magnificently, and it truly stands as a monumental example of how over-complicating your plot and letting it run away from you can work against you.

The main menu contains short video clips to catch up the events of each game, which is a good feature though it’s probably not going to make you less lost if you’ve never played the Kingdom Hearts games before. As I’m sure you can guess, the plot is extremely dense. It features lots (no really, lots) of lengthy cutscenes and lots of reiteration, so if you’re not a fan of cutscenes you run the risk of feeling frustrated. In an annoying addition, there’s often no background music to cutscenes, which makes them feel empty. In a way the end is filled with silliness and deus ex machina, but I can’t help but feel as though it’s been earned; after all, surely the series can afford to be a little over-indulgent now we are in the endgame. I’m sure all of this has put you off but let me make it clear that despite the failings and faults I still adored Kingdom Hearts III’s story; the sense of the narrative finally coming together and offering some feeling of closure was worth it after enjoying the entire franchise. 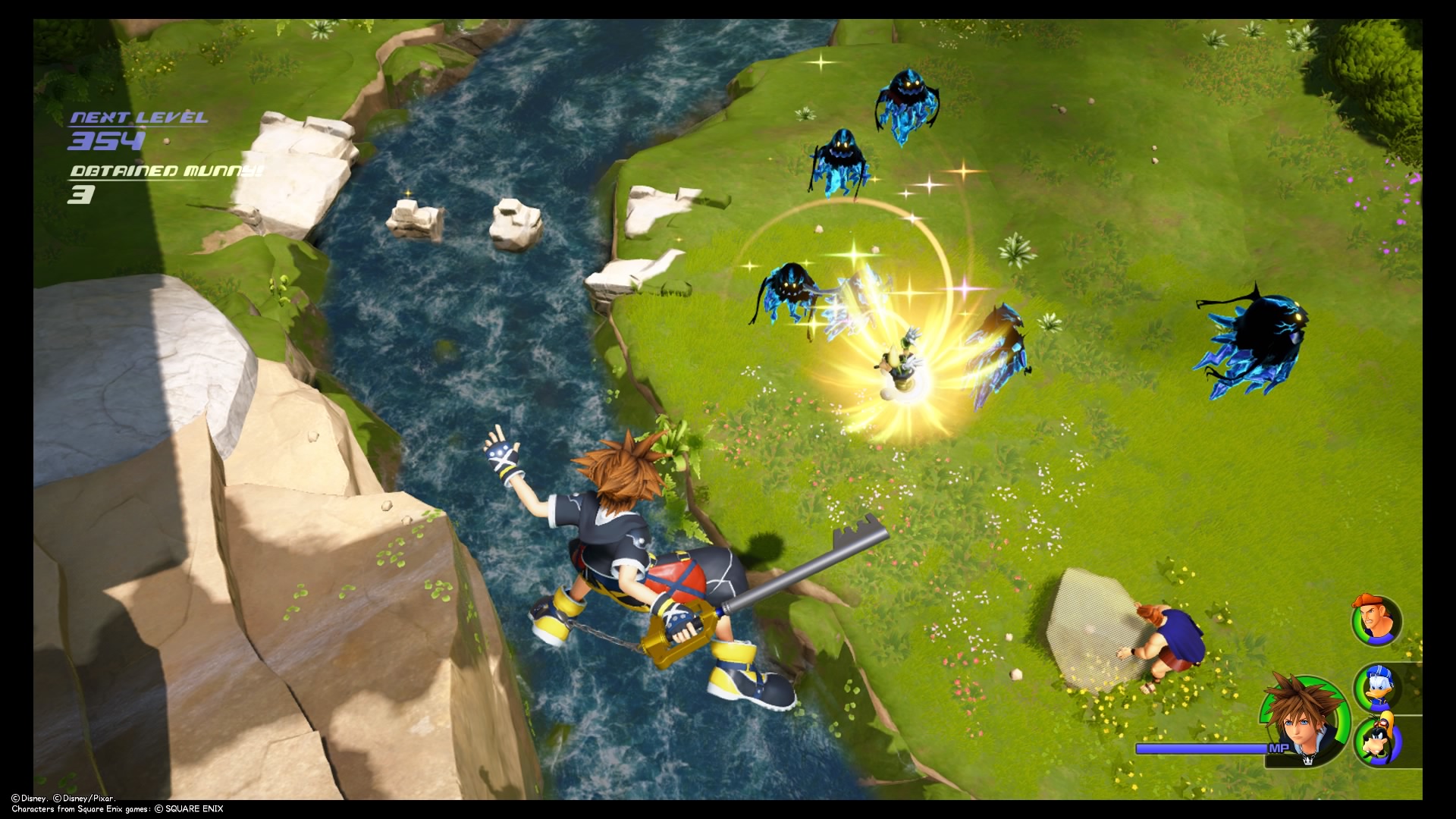 Kingdom Hearts III returns to action-RPG roots of the franchise. I must admit I had some reservations before going in; Kingdom Hearts II is one of my all-time favourite games and its fluid, responsive, and gorgeously animated combat is a large part of why. Thankfully Kingdom Hearts III managed to meet those expectations with aplomb.  We saw the combat system already in 0.2 -A Fragmentary Passage- and it’s the same here. Sora’s attacks fill up a combo metre and when it’s full special Situation Commands appear above the menu but they tick down on a timer so you’re encouraged to pick your moment and use them quickly before they disappear. These Commands differ based on how you filled the metre. Using magic unlocks Grand Magic, huge explosive versions of spells, and different arenas in the gameworld trigger a variety of special Attraction attacks, which summon in various rides and rollercoasters familiar to Disneyworld fans. These are silly, flashy, and undeniably effective and though you might tire of them towards the end of the game, they’re a welcome distraction early on.

Filling the combat metre while using Keyblades unlocks Formchanges, which are essentially a reprised implementation of Birth by Sleep’s Command Styles but with an interesting new twist. Each of Sora’s Keyblades have a different set of Formchanges, and often these feature the Keyblade itself turning into a new weapon, such as a pair of claws, a spear, or even twin guns, which adds an entirely new dynamic to combat. For the first time in the series, Sora can now equip up to 3 Keyblades at once, and they can be cycled through freely in combat meaning there’s even more options for players to experiment and find a set of Keyblades they like and which can adapt to any situation. Keyblades can also be upgraded through synthesis so even starting Keyblades can be kept relevant all the way through the final boss. 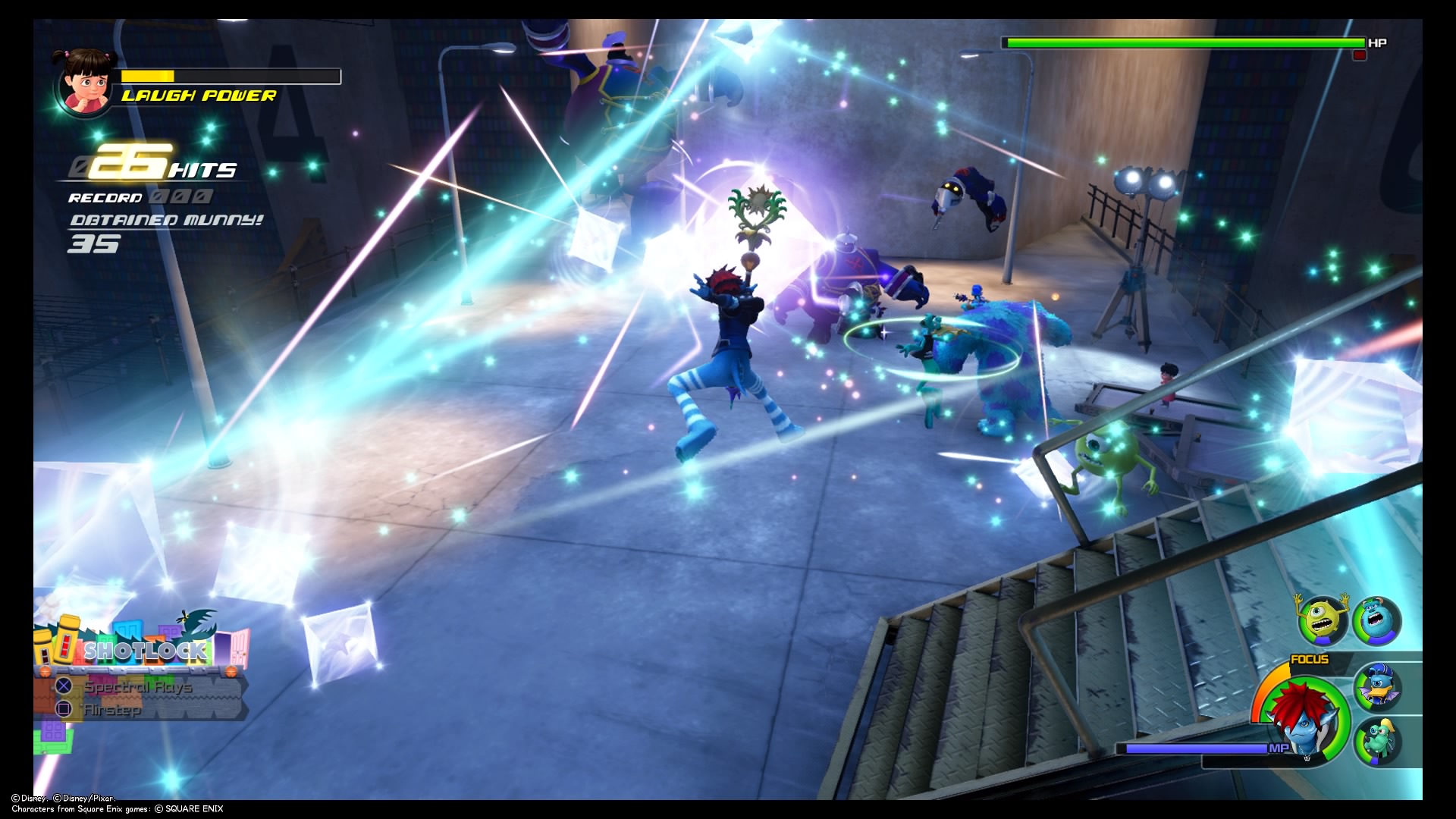 Speaking of the bosses, Kingdom Hearts III features significantly more giant monster boss fights than any previous game. This ties to the greater scale both in terms of the narrative but also in terms of the levels: Kingdom Hearts III has used the move to the PS4 and Xbox One to expand the levels on offer, and now stages are vast. A faster running speed helps in making them less arduous to explore, as does the return of the Flowmotion platforming system from Dream Drop Distance which allows Sora to bound off walls and launch into longer dashes. The size of levels makes exploration for treasures and collectibles potentially feel a bit intimidating, and though there has been a clear effort to recreate locations from various Disney and Pixar films, sometimes you find yourself running through what are essentially bland corridors.

The Arendelle level, based on Frozen, is a particular offender for this; Sora and the gang spend most of their time wandering around nondescript snowy mountain scenes while events from the film happen without their involvement (this even includes an almost shot-for-shot recreation of Let It Go because of course it does). I do appreciate the ways in which other levels have had a bit more creative license applied in order to make them more exciting to traverse; for example, the Toy Story level sees Sora jump into giant toy robot suits, Gundam-style, and jet about a multi-level toy store, and San Fransokyo from Big Hero 6 simply dumps Sora into an impressively large recreation of the aforementioned city in which the Flowmotion comes into its own as Sora can sprint up the side of huge skyscrapers and launch himself skyward in an exhilarating blur. The centrepiece is probably the open seas of the Pirates of the Carribean level, which opts for a kind of shrunk-down Assassin’s Creed IV: Black Flag experience, popping Sora in command of his own pirate ship and giving you free reign to sail to various islands and leap over the side to explore.

Kingdom Hearts III also features a veritable plethora of minigames and sidecontent. The gummi ship makes a return as a means to travel to new worlds and once again it takes a new form. Rather than being an on-rails shooter like the previous two incarnations, here flying the Gummi Ship is a free-roaming affair as you pilot your craft through the vast space known as the Ocean Between. There’s a surprising amount to discover here, from special combat missions which pit you against waves of enemies and even secret bosses, to solving puzzles to unlock new treasure. Though exploration is largely optional and you don’t need to put a ton of time into the ship in order to progress, I found it quite compelling; though it lacks the intensity of the mission-based structure of Kingdom Hearts II’s gummi ship sections, it makes up for it with the scale and freedom given to you.

Because this is a modern and up-to-date game, Sora gets a smartphone very early on which quickly becomes linked to a few other side-tasks he can complete. There’s the glorified scavenger hunt of finding hidden Mickey emblems dotted about the worlds, a series of photo challenges he needs to fulfill to get synthesis materials, and he can even play old Game and Watch style videogames on his phone. I must admit though the minigame which caught my attention the most was the cooking one where Sora is piloted by Remy from Ratatouille – it’s a kind of stripped down version of Cooking Mama but somehow it manages to be both hectic and terribly good fun.

It’s safe to say that my worries going into Kingdom Hearts III were allayed. It’s definitely an authentic Kingdom Hearts experience, and it meets the expectations that I had for a proper console release, and that was no small task given the vast wait between it and its predecessor. I’d like to reiterate that, despite the appealing gameplay, it’s definitely not recommended for newcomers due to the sheer weight of the plot bearing down on it, but as an established fan I thoroughly enjoyed it. There are some legitimate criticisms of it, naturally, but I’ve always maintained that the mark of great games are whether or not its issues define the experience – Kingdom Hearts III, as with so many of them in my eyes, overcomes those problems and makes you forget about them entirely while you’re playing.