Where do we draw the line between game and art? The debate is one which seems to attract divided responses, and perhaps one area which doesn’t help that conversation comes in the form of “art games”. Typically these seem to be games where the “game” part plays second fiddle to the “art”, but Bound seems to be a release which tries to do the admirable thing and bridge the gap.

Often we talk about games being beautiful but I think Bound honestly earns that term. An art game from the minds at Plastic Studios, Bound lives up to that title superbly. The gameworld Bound presents us with is startlingly, strikingly unique. It’s a kind of crazy whirl of PS1 polygons and surrealist architecture; a blocky gray sea ebbs and flows beneath our feet but skulks away as we descend to uncover new areas to explore, cuboid reeds and grasses sway against each other, impeding our progress, and chessboard tiles shift back and forth. Bridges form to match our steps and fall away behind us, while the nearby splashes of bright, Mirror’s Edge red alert us to important pieces of scenery, and haphazard towers endlessly construct and collapse in the distance. Frankly, the pictures I’ve captured here simply don’t do Bound justice.

But it’s not enough to say Bound looks truly magnificent. In fact, it’s more than just how it looks as a picture, but also about the sheer unrivalled beauty of the animation. Our character, the unnamed Princess of this polygonal Kingdom, dances her way through each stage – that’s not a metaphor, by the way. She literally dances – every single movement is lifted from the ballet handbook, and it is entrancing. Each step is taken with care and grace, deftly moving to a hidden song. Pressing jump triggers a lively grand jette, the dodge button becomes a joyful gambol rising into plie, and sliding down the great ribbons which mark the end of lessons sees the Princess stand in arabesque, gliding with the wind. There’s even a button dedicated purely to dancing: holding R2 and any one of the other face buttons sets the Princess off on a dance, each one different depending on which button is held. As she dances, ribbons of her own unfurl from her wrists and swirl around her, illuminating her as she twists and poses. It’s a beguiling sight, but it’s not just for decoration – this act of dancing serves a practical purpose as well as the ribbons shield the Princess from the hazards of her Kingdom and dispel the threats holding it hostage.

The plot of Bound is twofold. The Princess is tasked by her mother with saving the Kingdom from monsters. Huge and black, with screams heard across the land, they move entirely unlike the Princess, grasping and tearing at blocks as they swing and leap through their territory. In their wake they leave blistering tendrils which ensnare the Princess, swarms of darting creatures that tear at her, and great torrents of fire which threaten to scorch her skin. However, that’s just one layer of the story. The other follows a pregnant woman on a beach, slowly making her way to a house at the other end. Along the way she rests and takes a look inside a book she carries, which depicts the events of the Princess’ life.

You might have guessed it already from that brief description but it’s no spoiler to point out we are playing an allegory, a great metaphor for the pregnant woman’s life. Events in her childhood are revealed as they twist the narrative of the Kingdom and define the torment and struggles which the Princess faces. It’s not especially subtle, and perhaps runs the risk of being considered trite at worst. Although it feels damning to say it, Bound’s story feels mostly inconsequential. Given the game has lots of walking simulator elements, the story should be one of the strongest focal points, but it simply isn’t. It threatens to be a kind of hackneyed mid-tier drama more than it elicits a deep empathy or pathos.

Herein we arrive at the great problems which art games face: is what they say compelling, and have they sacrificed the game for the art? Regrettably, Bound comes down on the wrong side of both of these questions. While its narrative will no doubt resonate strongly for some, it’s extremely simplistic and predictable, and what dialogue there is trends towards being heavy-handed. It doesn’t take long before the plot of the Princess and the Kingdom entirely gives way to merely openly echoing the pregnant woman’s thoughts and fears, and by the latter stages even the pretense of metaphor has gone out the window, which feels like a loss. That’s certainly not to say I didn’t empathize with the pregnant woman; indeed, her story is a familiar and tragic one, and it begets an emotional response, but the way it is explored began well before quickly trailing off. 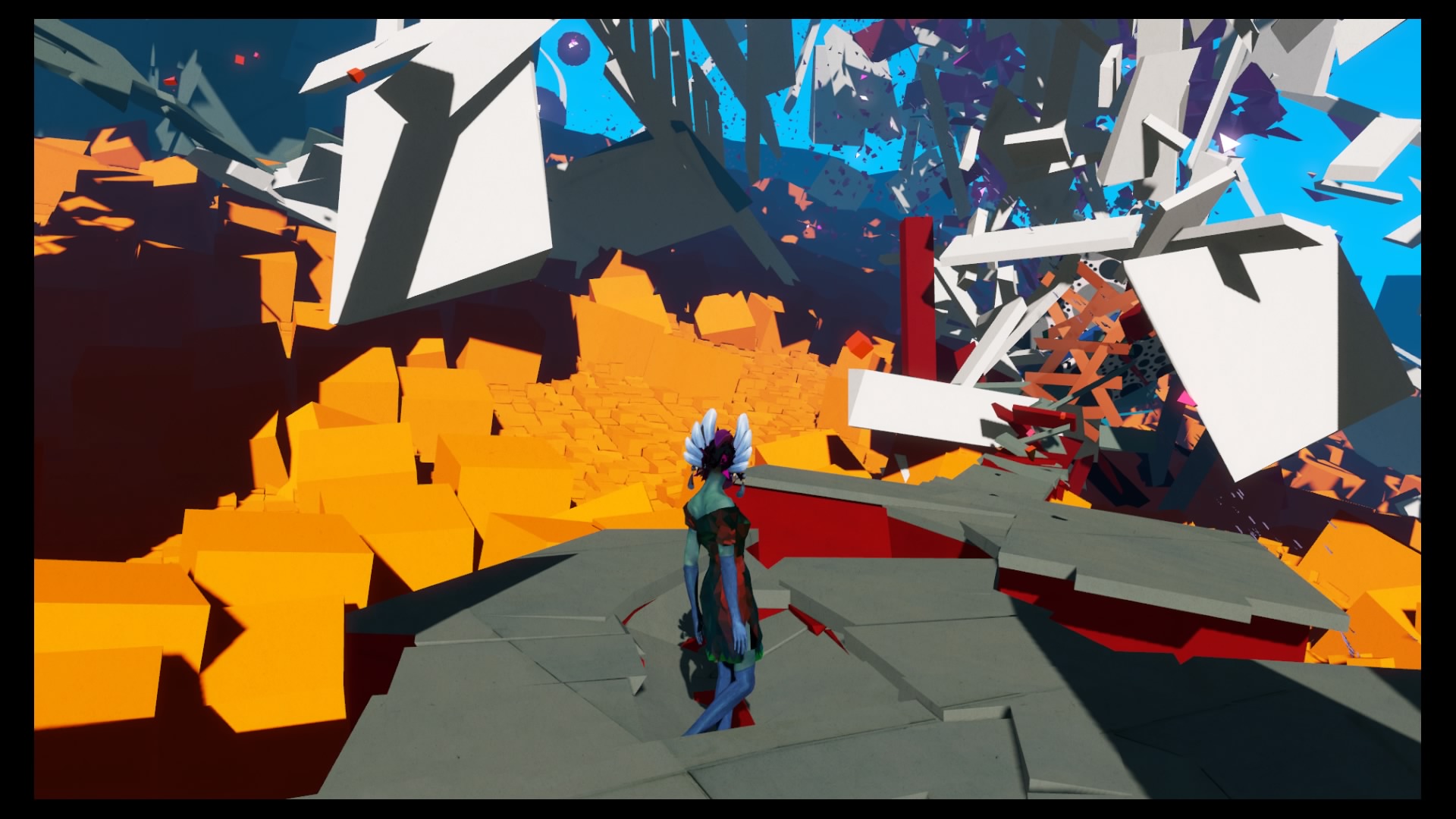 The gameplay also suffers as a result of the mismanagement between art and game. Bound struggles to find an identity at times between platforming and a simple walking simulator. Sometimes the game is content to let you meander through the world with some minor prodding as to where you’re meant to go, but at others it throws hazards at you with reckless abandon. Despite that, it’s a game without challenge in terms of traditional markers of difficulty as every single one of the game’s enemies can be glided through by holding the dance button, which seems to make you invulnerable (there’s almost a meaning there about how dancing can help deflect all of life’s problems except, crucially, the developers never indicate the pregnant woman ever was a dancer beyond once featuring a shot of her as a girl in a tutu). The only challenges in the game tend to come from the slow-to-respond controls, the camera, which has a mind of its own, and sometimes when platforms decide to disappear from out underneath your feet without warning.

Though the Princess’ movements are amazing to watch, they are also slightly irritating to control. Even something as basic as walking forward is replaced by a kind of oscillating procession, and the hit detection is suspect; I experienced plenty of times where I looked like I should have stuck a landing only to watch as the Princess overshot or slid off to fall helplessly into the void below. The camera is another battle.Though it is freely controllable, it often snaps around into what the developers clearly thought were advantageous positions, or it tries to get a nice look at scenery. Unfortunately most of the time it isn’t and doesn’t, and you’ll find yourself having to maneuver it constantly. On top of all that, having to repeatedly use the dance command to get through obstacles quickly becomes tedious, especially because it makes your movement that much slower.

At least the soundtrack is nice. Composed by Ukrainian electronic musician Heinali, Bound’s music is linked inextricably to the experience in a much more intense way than your usual soundtrack as the music and your character’s dances flow together in a marvelous mix. The heavy reverb on the opening notes of First Argument resonate with despair, which is multiplied as the howling soundscape fades in from the background. Though it’s not loud it still builds a type of wall of sound which never lets up even as other instruments phase in. It’s also a track characterised by abrupt starts and stops, as instruments and melodies clash against one another for aural supremacy. The juddering motions throw you off, expertly crafting the tumult of a fight between lovers. Grey does a similar trick, using a distorted scraping screech that cycles in the background to represent an oncoming misery before it gives way to a dark saw wave rhythm which pulses like a headache. As that track leads in Depression we get a stunning use of an organ, its power an overwhelming wave that consumes all our aural space, which I think makes for a fantastic way of emulating the feeling purely through music. Still, much of the soundtrack echoes my sentiments about the game: it’s pretty but also pretty empty, though of course there’s no denying the effective way which it is incorporated into the play experience.

For all my grumbling, I would like to stress that Bound was an invigorating experience at least, if only for the uniqueness of its presentation and animation. But, it also really could have been something more. I can respect any developer who commits to that strange and interesting world of the art game, and especially when they try and balance the “game” part of it, but Bound is hampered by control problems and a weakness in its storytelling. It’s a pleasant and blessedly brief time, but nothing more.

A game that makes you go, “Well, it’s alright…” but it’s a kind of drawn-out, unsure, and reluctant decision? These are those games. Might just be worth playing if you can get it on the cheap.

One thought on “Bound”