That I keep playing the Darksiders games is a real puzzle to me. It’s not that I especially dislike any of them but as I’ve said repeatedly over the course of reviewing the series, it’s a franchise with a reasonable level of popularity which I’ve never really gotten on board with. Despite that, I find myself here once again, having played a fourth game in this series, and with kind of similar results to the rest. 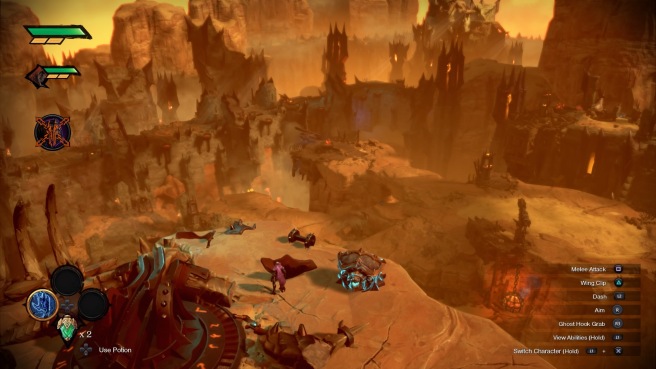 So, what have we gotten ourselves into this time with this latest entry into the Darksiders franchise? Well, Genesis is a prequel, set well before the events of any of the 3 other games. This time we follow the fourth member of the Horsemen, Strife, during his time as an enforcer for the Charred Council, an apparently neutral party which governs the delicate balance between the warring factions of Heaven and Hell. The Council suspect that Lucifer is up to no good (wonder what clued them in to that, maybe that he’s the literal Devil) and they send Strife and his brother War to investigate.

As the brothers take a look into things down in the realms of Hell they come across series mainstay Samael, a sometimes-ally, all-times-conniving git of a demon who tells them that Lucifer has given huge power boosts to four Masters of Hell who are now wreaking havoc across creation. Samael ropes the brothers into dispatching the Masters, although to their credit Strife and War both seem to be aware they’re being used, given that eliminating the Masters gives Samael the freedom to expand his own influence and power but they kind of shrug their shoulders and just crack on with demon-slaying.

I’ve criticised the Darksiders series before for the seriousness with which they take their plot. Everything about it is overblown and ridiculous and yet time and time again Darksiders presents itself with poe-faced banality. Darksiders as a franchise has always took itself far too seriously and often I think that’s been part of why I never truly got on with them; the core concept is bombastic anyway but given the entire series resembles what a coked-up Warhammer fan who read a cliffnotes version of the Bible might write, the fact that the games took themselves seriously was always daft to me. Genesis has the good grace to acknowledge the overblown nonsense and poke light fun at it all the way through, and for the first time I genuinely enjoyed the narrative. The underlying sense of poking fun at oneself gives Genesis the series’ first foundation of humility and brevity, and the core plot is balanced by a few dry laughs here and there as well as a handful of well-crafted character moments between Strife and War. The end result is the franchise’s most understated and enjoyable narrative yet.

Strife in particular is considerably more into wisecracks than any other Darksiders protagonist but you know what? The goofy snide jokes actually work here. His remarks help make Strife a significantly more engaging character, and on top of it it seems that the writing team as a whole has learned a lesson or two as even War ends this game as a much more likeable guy. We get a far more realised personification of war in Genesis as he’s more battle-hungry yet clearly having a whale of a time as he carves through hordes of demons, and he even learns along the way how to have a laugh himself. The moment where you’re introduced to the in-game Arena is pretty funny as Strife is coolly up for a challenge but War is practically besides himself with glee. We get to see a little more to both of the brothers as well though as the plot brings up a central moment in the creation of the Four Horsemen in Darksiders lore: the slaughter of the nephilim/ It’s clear that the moment haunts both brothers but each reacts differently as War hides behind his sense of duty to the Charred Council and reflects soberly that it needed to be done lest all creation get annihilated, whereas Strife is more emotional and regretful over the events which transpired.

The first glance at Genesis probably raised a few hackles from longtime Darksiders fans because of how differently it is presented. Previous games have all been variations on big-budget action-adventure games, with dungeons and puzzles lifted from The Legend of Zelda, and combat adapted from God of War and Devil May Cry. Genesis on the other hand most resembles games like Diablo and Torchlight; a top-down camera follows Strife and War around as they carve their way through levels. So, you could be forgiven for thinking it’s a looter RPG; however, you’d be wrong. Genesis actually does a rather good job of preserving the Darksiders gameplay, and veterans of the series will find a lot of familiar elements.

I love that both brothers are playable, and can be freely switched between during gameplay. War’s gameplay is recreated neatly from the first Darksiders; he’s a hulking hack-and-slash character, wading into enemy mobs with wide swings of his sword. Both characters have access to special abilities and weapons, and War’s again are recreated from the first game; he gets AoE attacks to clear spaces and even a Zelda-style boomerang to lock onto multiple ranged enemies. Strife however dual-wields guns and when playing as him the game turns into a twin-stick shooter, allowing you to plink away at enemies from a distance as you kite around the arenas. Unique to Strife is the Hotshot metre, which accrues as you land hits and when full Strife’s bullets are supercharged for a limited time. He can also equip a variety of shot types with different properties, allowing you to customise how he plays; for example, the electric ammo arcs between enemies making mob control a doddle, while the slightly weirder gravity ammo creates black holes which stifle enemy movement.

Genesis still retains minor RPG mechanics which the series had begun to dip into from Darksiders 2. As enemies are defeated they can drop soul orbs unique to each enemy type; these can be slotted into a grid shared by the brothers and doing so applies new stat bonuses and passive abilities to them. Managing these slots is key to progression through the game as without them Strife and War will struggle to keep up with the harder enemies in later levels. The game does encourage a bit of grinding though; slotted orbs can be upgraded by collecting orbs of the same type, resulting in gameplay loops of returning to previous stages and killing the same enemies over and over, waiting for more orbs to drop. Additionally, the vendors in the game sell very useful upgrades but for masses of souls, and the most efficient way to gather them becomes a mixture of replaying beaten levels and fighting in the Arena and unfortunately I’m never terribly enthused by those kinds of loops. If you’re really into the combat though it’ll probably be right up your street.

Puzzles also make a return (they are an ever-present part of the franchise I guess) but I remain lukewarm towards them. Genesis suffers a bit from lack of creativity when it comes to its puzzles; there’s only so many repetitions you can take of throwing portals or activating ground switches or racing against time before levers realign themselves before they become tiresome. Because the game is playable (and perhaps supposed to be played) in co-op, puzzles which are a little tricky for one player are presumably significantly easier or at least feel more natural with two, though thankfully the game can be completed entirely in singleplayer. You’re also expected to do some platforming but isometric platforming is always a tricky sell as it’s all too easy to miss a jump due to the pulled-back camera placement and plummet to your death.

In another first for the series I found myself quite enjoying Genesis’ soundtrack. I hadn’t really found any of the previous games’ music especially noteworthy, but Gareth Coker’s approach for Genesis really resonated with me. Perhaps it’s the fact that Genesis is a simpler, more arcadey feeling game, but the super pumped up music just worked for this time. Tracks like The Hollow Lord felt like an amalgam of several games’ music (fitting for Darksiders I suppose) – the choral voices recall the PS2 God of War theme, the heavy brass felt very Doom, and the dirty fuzz-produced bass made me think of Wolfenstein. If you’re going to take inspiration for your demon-slaying action game from anywhere, you can do a whole lot worse than those. Speaking of inspirations, check out the vocals and the glorious synth bass in The Slag Demon and tell me you don’t think immediately of Devil May Cry 3; on top of that when the violins intersect with the wailing vocal lines of The Icebind Cavern all I could think of was the battle themes from The Witcher III, another storied soundtrack.

Another good marker of videogame music is when a track is listenable not just in context but outside of it as well, and Coker manages to supply that as well during Genesis. The Legion Boltspitter, for example, could easily be a track I see myself spinning on Spotify with its chugging guitars and strings coming together in a brutal marriage.

My initial impressions of Genesis was that it looked like a cheaply made spinoff game; I really didn’t expect it to be a fully-fledged entry into the Darksiders franchise. I’m happy to say I was wrong; what’s more, because this game was smaller, shorter, and more tightly focused it has ended up being the game I enjoyed the most from the series. The gameplay is intuitive and exciting, the soundtrack is awesome, and the writing is among the best the series has to offer.

Damn fine stuff, a game that doesn’t quite make the top echelon of games but sparkles regardless and holds the interest expertly. Make the time to give this a play.