A while ago I reviewed God of War, a 2018 soft reboot of Santa Monica’s epic hack-and-slash series about the world’s angriest man. In it, said angry man learns to control his seething rage as he guides his young son through Nordic wastes, all the while trying to escape from the grip of his past. It was a brilliant game that remains a beloved title of the franchise due in no small part to the excellent work done to humanise Kratos and elevate him above being simply an avatar of pure hate and fury.

That said, sometimes that’s all you want, and the old God of War games are by no means bad. Unfortunately PS Now doesn’t let me capture screenshots from them so they’re a pain to sort for this blog. Thankfully, God of War III had a remaster and I can record that through my PS4, so let’s take a look!

It might be easy to look upon this and the earlier games with the gift of hindsight and dismiss them for being simpler and less inclined towards strong writing than the 2018 entry but I think that would be a mistake personally. Obviously there’s no accounting for taste and I certainly couldn’t blame anyone for preferring the newest game but I do think there’s a lot to like in God of War III and by extension the previous entries in the franchise. If there are any fans of the newest game thinking of doing a little digging through the series’ past, then the thing I’d suggest bearing in mind is that the goals of the original games are quite different to the 2018 God of War. Part of what made that entry so successful was the aforementioned attempt to humanise Kratos; it sought to build a brand new identity not just for Kratos but also for the series. However, the earlier games are very different beasts. 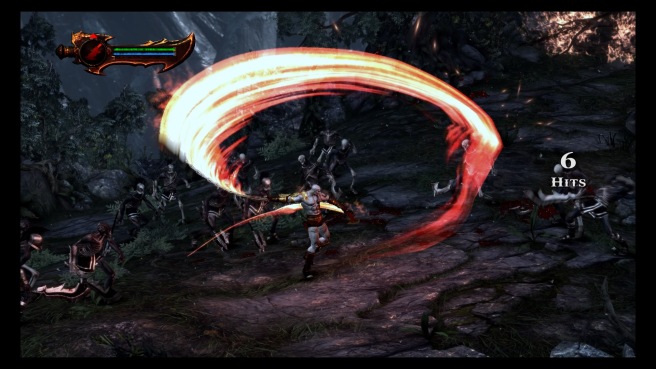 The first thing in God of War III that might strike a fan is how vastly different Kratos is. There’s no trace whatsoever of the humble, quiet woodsman who becomes deeply lost in his grief and tries constantly never to give in to his anger in order to better raise his son. Instead this era of Kratos is a seething, roiling storm of hate and aggression. This is the Kratos which we see fragments of in the reboot; this is the man whom his older self fears and buries. At first glance Kratos’ character here might feel unsettling, jarring, and even lazy. There’s very little depth or nuance to him, but this isn’t especially unusual for the older games, and God of War III’s take on our protagonist is a typical example of how he is characterised in them.

Though he’s driven almost solely by anger and hatred for the Gods of Olympus for the majority of the plot, there are flashes of humanity to be seen. Throughout the story Kratos interacts with a vision of a young girl whom he at first mistakes her for his long-dead daughter Calliope, and as the narrative progresses he seems to automatically place himself in a surrogate-father position. This is also not that unusual for the God of War series; at their heart it is a series about the importance of family, and the impact it (or more precisely, the lack of it) has on Kratos. He is a father without children, and the loss of his family continues to weigh on his mind like the stone of Sisyphus; every time he tries to focus on something else, family returns to wrench his mind back, whether it’s a reminder of his past failures, the atrocities he committed in service to the Gods, or the cruel irony of his current path as he stands against his own Olympean family. The problem is that these ideas are secondary to other elements of the games, and the writers seem to prefer to have the vicious and angry Kratos be at the forefront of the game. Granted, it’s a hack-and-slash game and the series has always traded on a kind of sense of juvenile bloodlust, but it’s nevertheless galling to see the more engaging ideas pushed beneath the surface in favour of the more one-dimensional raging Kratos. It’s probably this, if anything, that might put other patient gamers off from discovering the series, particularly if they’ve come from the 2018 entry. 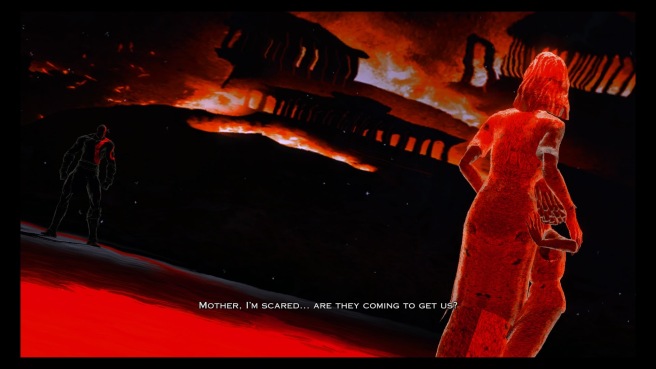 It’s not like the overall story is going to save it either. It’s very simple, almost laughably so; Kratos, still enraged at the Gods for trying to kill him in God of War II, enlists the help of the Titans to storm Mount Olympus and kill the Greek pantheon. That’s really about it; there’s a predictable bit of betrayal in there as well as the Titans cast Kratos aside in the beginning of the game so our hero can just rage at absolutely everyone. However, keeping it straightforward does let the game move forward at a fair clip, and much like most of the early God of War games you can blaze through it in an afternoon; my replay for this review clocked in at around 5 hours.

No, what you’re really here for in God of War III is the gameplay. Remember, this was very late on in the franchise’s first saga as Kratos murdered his way through Greek mythology, and by this point the series’ trademark bloody ballet of combat is at its absolute peak. God of War’s fighting was excellent right from day one, and God of War III doesn’t bring anything new to the table; rather it simply attempts to perfect it. The PS4 remaster ups the framerate which helps make an already smooth combat system run even more nicely, but it’s only a tiny addition.

As ever, Kratos carves his way through hordes of baddies using his trademark Blades of Exile, twin serrated swords attached via magical stretchy chains which let Kratos swing them in wide arcs and whip them around with lethal abandon. The animations are fluid and beautiful, and once you’re in full flow it really is like a fatal dance as Kratos whirls about, racking up huge combos for greater experience rewards. As you progress through the game you pick up a few new weapons to use which can be switched instantly via the d-pad, but new to God of War III is a special command which launches an attack that cycles through the weapons mid-combo, encouraging greater knowledge of each individual weapon’s moveset and usage. Kratos also gets access to a range of magic attacks, one for each weapon; these are all impactful but manage to be distinct from one another. His Blades for example summon down a Spartan shield wall and a rain of arrows in a powerful crowd-control move, while a later weapon casts bolts of lightning which arc between foes to constantly push your combo metre up. Kratos can also pick up a trio of magical items to add to his growing collection which are used during gameplay to progress through puzzles and platforming challenges.

A key feature of older God of War games is of course the ubiquitous quick-time events. Once upon a time these were the bane of gaming as they were shoehorned into games without thought for their implementation and God ofWar is probably partly to blame for that. However, even since the first game the series has made an effort to use them as a core part of gameplay rather than as an incidental tool, and they always come with well-used haptic feedback, such as having to mash circle as Kratos struggles to lift up giant stone doors for example. They’re also used a lot in the special kill animations which are more visceral and brutal than ever in God of War III.

In general, “more brutal than ever” might well be the best phrase to describe God of War III. The God of War  franchise has always traded on its penchant for gory action, but III takes it to a new and, at times, uncomfortable level. While the earlier games were happy to splash blood around and to showcase Kratos’ savage means of dispatching baddies, none were quite as gleeful about it as III. As Kratos’ rage reaches an incandescent peak, he winds up committing acts towards his fellow Olympeans that can only be described as monstrous, and the improved graphical fidelity of the PS3 (and certainly the PS4 remaster) show it all in high-definition, inescapable, and stomach-churning detail. I am by no means squeamish but it’s hard not to balk at scenes like Kratos tearing the fingernails from a foe’s hand, or carving lumps of flesh from a boss. Worse still is the fact that these actions are almost universally accompanied by quick-time events, meaning that the player is expected to take an active role in these; clicking the L3 and R3 buttons in, for example, to simulate Kratos using his thumbs to put the eyes out of another character. The point which makes me cringe in revulsion every time I play, hammering the shoulder triggers as Kratos decapitates a character bare-handed; the shot is framed to put the victim’s neck centre-screen so we see in clear detail the flesh being torn, inch by inch.

These actions, gruesome as they are, speak to an innate immaturity in God of War, and it’s one which sometimes works to its detriment. The best games in the franchise are the ones which recognise Kratos is a human and use the tragedy of his life to give him character and depth. Kratos’ interactions with Pandora, his first mistaken gasp of his own daughter’s name, and his subsequent immediate sinking into surrogate parenthood are the bits which speak to the player in a more meaningful way; surrounding it is simply a few hours of bloodlust and shouting. It’s almost unfair that in this grand finale to the Greek section of the God of War story we get more of the latter than the former; that we don’t give the compelling part of Kratos any significant recognition or representation is a missed opportunity, and instead we get a few hours of hideous cruelty as he rapidly rips his way through the Greek pantheon. Of course, there’s nothing wrong with a violent game being violent; those kinds of games have their place and that is the identity which God of War trades on after all, but it does feel a little galling that a way to elevate this game was laid out clearly in front of the writers and they chose to sidestep it in favour of a bit more bloodshed. God of War III is, without the slightest hint of doubt, a magnificent game to play; it represents the pinnacle of the franchise’s glorious combat and the work gone into presenting it is undeniable. While for some the action-packed conclusion of Kratos’ story might give some catharsis, for me, that tiny taste of what could have been is enough to make me wistful, regardless of how much I enjoy the rest of the experience.

One thought on “God of War III”