Sometimes you can get a general sense of what a game might be like from its title, or the first few images you see of it. Other times, well, you get Donut County. I really didn’t know, and nor do I think I could have guessed, what Donut County was about.

The thing I think I love the most about Donut County came at the end. As the credits roll and you sit back to bask in the self-satisfied appreciation of a game well-beaten, a little dedication pops up on-screen. It’s a short sentence noting that the inspiration for the game came from a tweet posted by @PeterMolydeux, a Twitter account which parodies the reputation of Fable, Black and White, and Godus developer Peter Molyneux and his propensity to promise huge ideas that fail to be realised in his games. That a game like Donut County can come from, and be proudly aware of, such humble origins really made me smile. Well, it kept me smiling, because frankly I was grinning like a nutter the entire time I was playing Donut County.

But what was the tweet, I assume you cry? It reads, “You play a hole, you must move around an environment making certain elements fall into correct targets at the right time.” And so, true to form, in Donut County, we play as a hole. I think I’m right in saying this is the only game I’ve ever played where that’s the case. Perhaps it warrants a little more explanation.

When I say we play as a hole, I mean, well, we play as a hole. Donut County functions almost as a kind of bizzaro-Katamari Damacy. For those unfamiliar with it, the main gimmick of the Katamari franchise is that you control a tiny, incredibly stick ball, and you’re tasked with rolling over and collecting everything in the environment. As you gather items, your ball gets bigger and bulkier, and that in turn allows you to gather up even bigger items. It’s a ludicrous idea, and it’s only made better by how aware the games are of that fact, allowing them to lean into the silliness and provide a franchise of wildly colourful and over-the-top games. The developers of Donut County clearly understood that, and so it replicates both aspects of the core gameplay, and that same awareness of the inherent goofiness of the gameplay on offer.

It results in a simple, brilliant concept. Donut County is split into an array of short, simple stages. For each one, we begin with a tiny hole, barely noticeable to the poor inhabitants of the titular county. All we can do is move it around, and attempt to make things fall into it. The game is always very good about ensuring there’s plenty of very obvious bits of debris to swallow up in the early stages of each level, letting you get a good rhythm going of identifying stuff to chuck in the hole, and in turn watch as the hole expands, enabling you to start trying to make bigger things fall in. I’ve termed it as a puzzle game in the titles above, but it’s important to note that it’s got perhaps only the lightest of puzzle elements to it. I suppose technically the challenge is in making things fall down the hole in the right order in order to get the hole big enough to engulf everything in the stage, but in practice it’s a simple task to do so. 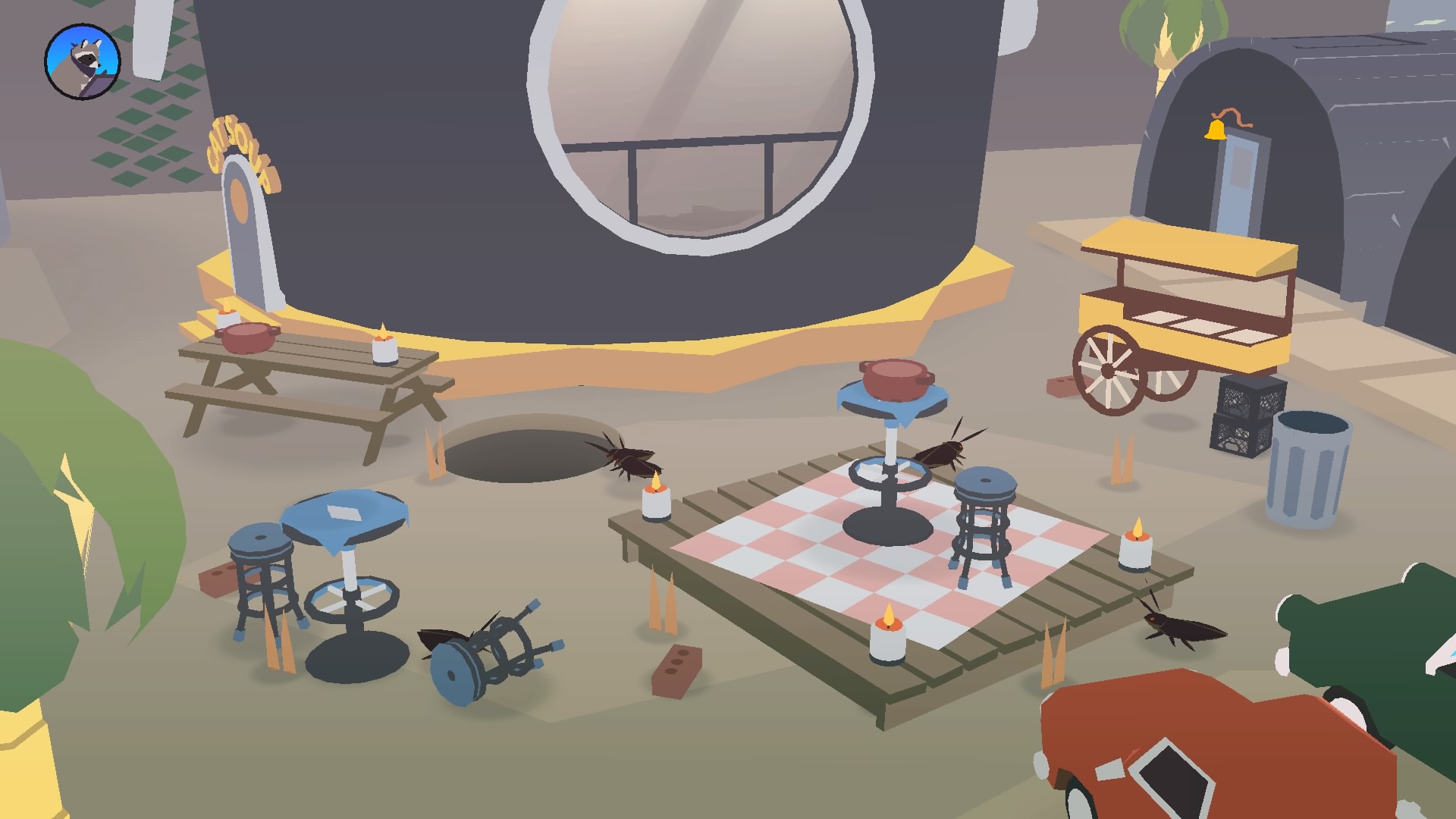 The simplicity works entirely in Donut County’s favour though. In the beginning stages it lets you focus entirely on engaging with that core mechanic, but it’s not so mentally taxing that it prevents you from enjoying the sights and sounds of Donut County. Later stages introduce some fun new twists to the idea. The hole can be filled up, changing the dynamics of how it interacts with the world; for example, if filled with water, objects now bob along the surface rather than falling down, and you need to find a way to drain it. The hole can also be filled with fire, bringing in another new way to interact with the world, although not in the way I was expecting. Other games might let you burn things or use the smoke in some way, but not Donut County; instead you can do things like set fireworks off or create impromptu popcorn. The latter stages add in a few other options, with the main one being a catapult; with this you can fire certain materials back up into the world. This does lead to some more engaging puzzles, such as one level which produced a real snorting laugh from me as I catapulted a frog into the air to catch bees in order to bring them back down into the hole.

In general Donut County made me laugh quite a bit. I don’t know if I’d call it a comedy game per se, but it’s definitely got a fantastic sense of humour and once again that awareness of its own silliness works to craft a lovely, endearing experience. It’s the interaction between the characters that really makes it; between levels we cut to the townsfolk, all of whom are sitting 999 feet beneath the surface of the world after having been swallowed by the hole. Central to events are Mira and BK; the latter is a raccoon who owns a donut delivery service, and the former is his exasperated friend. We’re introduced to them by way of a text chat between the two of them, as Mira discusses her annoyance with a goose deliveryman outside her door who honks too loudly before a hole appears and swallows him. We quickly learn that anyone who puts in an order for donuts from BK’s shop finds themselves a victim of these mysterious holes around town; this forms the framing for the majority of the levels in the game as each townsperson relates how they came to find themselves in the bowels of the Earth as they all put two and two together and realise BK is the source of their issues. 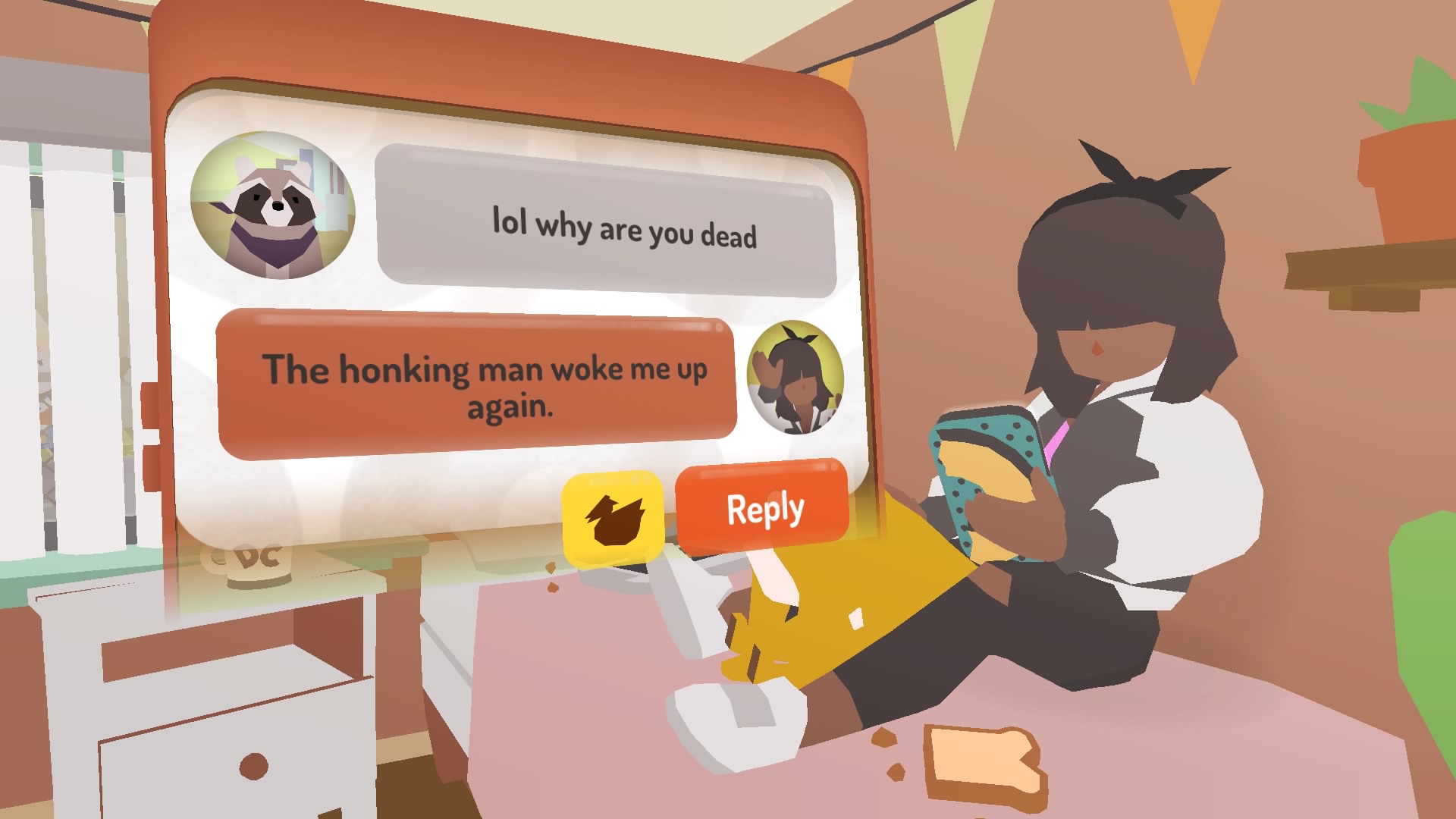 It’s a daft concept, and it’s not one that relies on any form of mystery – it’s made abundantly clear very early on that the holes are BK’s doing – but it revels in it rather than misuse or underuse it. A good portion of the dialogue is conducted in the form of text speak, often between Mira and BK, and Mira herself is a pretty heavy user of text speak in her regular speech as well; I’m not normally a fan of that, but this game has a rapid-fire approach to dialogue, favouring sharp and smart lines that move the character interactions along at a swift pace. It’s also hard not to chuckle at the “Trashopedia”, an encyclopaedia-style recapping of all of the unique items your hole has absorbed in each level; each entry is written by BK in a wry style, and it gave me plenty of reasons to chortle to myself as I flicked through it after each stage.

And that’s largely it for Donut County. It’s a short and simple game, but that’s a large part of its strength. It’s a very brief experience, clocking in at around 2 or 3 hours, best played in one sitting in an afternoon. Its puzzles are intelligently designed, never taxing, and the core concept is far more compelling than it probably has any right to be; you end up carrying on not just because the gameplay is absurd and fun, but also because everything about the game is charming in a very pleasant, easygoing way. Donut County hit a sweet spot for me, a puzzle game with a solid idea and backed up by surprisingly endearing characters.