Sometimes you just have to go back to where things all began.

I’m sure there must be some folk in the world who aren’t familiar with the Final Fantasy franchise. For the one or two people left in existence who don’t know what all this gubbins is, Final Fantasy is an exceedingly long-running and much-beloved series of JRPGs. Each new entry gets flashier and more extravagant, but every franchise of course starts somewhere. For Final Fantasy, that point is the 1987 Christmas season, when the first game was released on the Famicom. As you can see from the releases bar up above (and I’m willing to bet I’ve missed at least a few off there such is the sheer volume of re-releases this game has had) Final Fantasy has rarely, if ever, been unavailable to play in some form or another. Square has done a masterful job over the years of ensuring that the original entry in what is without a doubt their signature franchise has been accessible to play regardless of the evolution of gaming. I suppose the big question though is whether or not it’s worth it to dive this far back into videogame history? Does Final Fantasy (or indeed, any individual version of it) hold up, especially to the eye of someone immersed in a contemporary gaming culture, or is it destined to be consigned to the pit of only being played by die-hard fans or people taking a trip through nostalgia?

The first question when confronted with the thought of playing Final Fantasy has to be: which version to play? For this review I chose to play my personal favourite version of Final Fantasy, which is the GBA version. Choosing which version to play is, I think, probably quite a deeply personal action. For some folk, the original NES release probably holds a tonne of nostalgic resonance, while for others perhaps newer releases are more palatable. If nothing else, you’re definitely spoiled for choice: since its release in 1987, Final Fantasy has seen a veritable plethora of re-issues, many of which update or even change elements of the game. The most common alterations are audiovisual as most subsequent re-releases take the opportunity to capitalise on improvements in technology in order to make FF look better and better.

The Wonderswan edition was one of the earliest major overhauls of the game, including some added cutscenes to flesh out minor plot elements, spells could be deleted to free up slots in order to change your spell loadout, and items no longer needed to be assigned to a character to be used. My personal favourite, the GBA version, features all these plus other tweaks, such as redirecting attacks aimed at defeated enemies rather than defaulting these attacks to a block action and magic now uses an MP system. Basically, it continued to modernise Final Fantasy and most of the subsequent releases seem to use it as a foundation, generally offering the same experience albeit with fancier graphics, or an orchestrated soundtrack, and sometimes the occasional bonus dungeon. Suffice it to say it probably largely doesn’t matter which version of Final Fantasy you play; the core experience is still the same, and it’s not for me to say if one edition is better than another. I do think that it’s probably fair to say that the oldest releases haven’t aged terribly gracefully, and they retain a lot of elements which aren’t player-friendly, so in general terms I think I’d recommend any kind of newer release to any patient gamers looking back through the franchise.

Well then, if that core experience is the same, what do you get in that? Final Fantasy is what we would recognise now as a very old-fashioned JRPG. It features turn-based battles where we input commands for each of our party members and then we watch them all play out before getting to do it all again. While later entries tried to make the combat more dynamic, at first by introducing a time bar to actions and later by eschewing turn-based combat altogether, this first entry prefers (and all the subsequent remakes preserve) a more deliberate system. Turn-based combat certainly has its detractors as it can be seen as a slower, less involved mechanic but I’ll always confess to enjoying it.

It also features a pseudo-class system. I absolutely love RPGs with class systems, and although Final Fantasy doesn’t quite have a full-fledged one, it’s still got enough going on to scratch that itch. As the game begins we’re invited to create our party of adventurers (in my case usually named in some mundane way) and select what class they have. You get a party of 4 characters, and classes can be chosen from 6 options: warrior, monk, thief, white mage, black mage, and red mage. The differences between each class are significant, and you can create any combination of these classes across your party. This leads to some great opportunities for self-imposed challenges and replays, as you can always play the game again and mix up what classes you use. At its best Final Fantasy brilliantly captures that feeling of classic Dungeons & Dragons tabletop RPG games as your party of adventurers sets out and learns how best to complement one another’s skills. 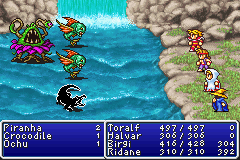 In fact that sense of playing a videogame version of Dungeons & Dragons is very pervasive. Final Fantasy is known to have been inspired by D&D and I think that’s never more clear than in this first game, before the franchise set off to forge its own unique identity. While sometimes the plot feels a little thin on the ground (perhaps not surprising for an NES game), there are definitely points where the story feels like it’s a grouping together of short campaign vignettes that your party fights through. Take the opening, for example: your heroes arrive in the kingdom of Coneria and are given the task of saving the local princess from the rogue knight Garland. After you defeat him the rest of the world opens up and the game blossoms into that tabletop feeling, with each play session and the unfolding chapters of the plot feeling like a new night sitting down at the D&D table.

However, while the remakes do occasionally come with new translations and more help given by NPCs, I’d still argue that the game suffers somewhat from a lack of direction. I’d suggest that the game could have stood to guide its players a touch more than it does, and as a result it’s easy to get lost or end up wandering aimlessly, which is a dangerous prospect given that enemies in Final Fantasy can often be strong enough to wipe out party members without too much trouble. Because there’s not quite enough direction and that is coupled with the almost episodic manner in which the story is presented, narrative beats can sometimes feel lost and isolated, and the connections between events can sometimes feel very hazy and unfocused. While it does come together in the end, I’m not sure I’d describe it as especially effective in doing so. Suffice it to say, while Final Fantasy’s plot is timeless in the same way that the monomyth is, it also lacks a lot of the character depth and evocative writing that the series attempts in future games. That’s not to hold it to standards set by subsequent games, but instead just by the standards of what makes a good videogame story, and unfortunately in that area Final Fantasy is found wanting – not irredeemably so, but notable nevertheless.

Still, it’s gratifying to see that Final Fantasy’s mechanics have held up over the years and they’re a good reason to keep coming back. I’m willing to be plenty of folk do also come back for Final Fantasy’s story – again, I’d put that down to that timeless quality I mentioned doing the work, I suspect, as I can definitely empathise with anyone who just wants something simpler than the heavy emotional investment the latter titles in the franchise demand of their players. It’s in some ways a hard sell as a patient gamer; chances are if you’re already invested in the franchise you’d probably manage to soldier on and enjoy Final Fantasy and it’s impossible to avoid the fact that that’s precisely the context from which I experienced it. That said, given Square’s commitment to re-releasing it on everything with a screen, I daresay the most modern reissues of the game are upgraded and updated enough to be palatable to even a mainstream modern audience as well.

Damn fine stuff, a game that doesn’t quite make the top echelon of games but sparkles regardless and holds the interest expertly. Make the time to give this a play.