It’s probably a rule of mystery and fantasy writing codified somewhere that at some point you are honour-bound to try and involve time travel in your plot. Then again, when your protagonist is a well-spoken and seemingly infinitely educated British gentleman, perhaps you simply have to throw in some time shenanigans because, well, the comparisons to Doctor Who are probably inevitable.

If you’ve been following along with the Professor Layton series thus far then you might be a little surprised at the mention of something quite as outlandish as time travel. After all, the franchise’s identity has largely been its predilection for puzzles, its quaint anime-British charm, and its love of equally charming-sounding mysteries; our first game saw the titular professor and his young assistant Luke roll up on a treasure hunt in a slightly odd village, and the second was ostensibly a murder-mystery but most of the time was spent wandering around some towns trying to work out what was so special about a mysterious box. However, this time around we’re on the trail of a really big mystery, far greater than any of the previous games’. Layton and Luke receive a letter that purports to be from Luke – but from the future! Things promise very quickly to be much weirder than normal. As luck would have it, London is playing host to a conference showing the world’s first time machine. Our investigatory pair show up to the event, but soon things go awry as the machine explodes; in the ensuing panic it becomes clear that not only has the chief scientist of the project disappeared, but so has the UK’s Prime Minister, who was also in attendance.

So, our stakes are high right from the off again. While following the trail, Layton and Luke come across a tiny, crooked old shop, hidden in a dark, twisty corner of London. Inside they find an enormous clock, tended to by an eccentric old couple. As our heroes examine the clock, a switch is flicked; the clock’s hands spin and it chimes an incredible, booming sound. The entire building shakes and shudders, throwing our protagonists off balance. As the sound and movement subside, Layton and Luke run outside only to find themselves staring at an unfamiliar skyline; it’s London, but it’s all wrong. A nearby newspaper reveals that they’ve been transported 10 years into the future, and into a dark, dystopian and hostile city.

If you’re thinking that this sounds exciting, good! So it should, frankly; as nutty as its premise is, Lost Future (or Unwound Future, as it’s known outside the UK) is a marvelous example of the kind of excellent storytelling the Layton franchise can showcase. Time travel stories, particularly ones set in a dystopian future, can run the risk of being a little trite, but I think this one is couched in enough of the franchise’s typical trappings to be saved that specific stumbling point; even though the concept might be one an audience could be jaded to, our alternate London here is still quite fun, and watching Layton take it all in with nary an askew eye has its own charm.

However, while the other Layton games have had the core mystery tied to the places the professor visits, this time around we’re treated to something rather more personal. The Lost Future uses its initial mystery as a vehicle to explore Layton’s character and past in a way that the series has never done before. A moment early in the 2nd chapter kicks this off as Layton reminisces about an old love of his, but the question of who she is and what happened between the pair hangs over the game in a way which is far more enticing than any puzzle. Frankly that seems like a fantastic achievement all on its own, but it speaks volumes about the quality of the writing in this installment that the puzzle of a dark future London comes secondary to the game diving into Layton’s past. It’s also a striking thought that although Layton has been a fun and enjoyable fixture in the series – indeed, it’s his calm expertise and gentle wisdom that I think are key elements to why the series has done so well – we’ve had no investigation into him as a character. It’s this which elevates Lost Future far more than anything else, and although that results in a more cutscene-heavy game than either of the two preceding ones, when the storytelling is this charming, who cares? 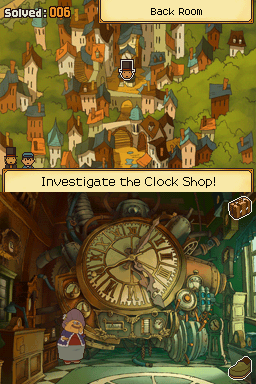 Of course, if you’ve played any of the Layton games before, you’ll already know what to expect. The core gameplay, naturally, has remained more or less unchanged since the first entry. For the uninitiated, Professor Layton games are adventure games, in which Layton and his accomplices must solve a larger mystery, and the main way in which they do this is by talking to people and finding puzzles to solve. Puzzles continue to be the series’ regular mix of maths conundrums and logic puzzle brainteasers; previous entries have always maintained a solid variety of these, with the second game showing a marked improvement both in terms of that variety and in the distribution of puzzles around the gameworld, so you’re less likely to run into multiples of the same type of puzzle at the same time. Lost Future continues that tradition; in fact, I’d say it’s easily one of the most well-balanced and enjoyable puzzle game experiences I’ve ever played.

In a first for the series we have boss battles – no, really! At points in the story we’re treated to “puzzle battles”; basically these are just regular puzzles but they’re accompanied by a banging tune and you can’t spend hint coins to get clues for solving them. I do wish there were a few more of them though; they only show up at a bare handful of moments, but they make for some of the game’s most memorable ones. It seems fitting as well that Lost Future is a lot more action-packed than in previous games, although that doesn’t mean we get action sequences necessarily. Instead we still get puzzles to solve, but similarly to the puzzle battles, they’re not so taxing that they can’t be worked through if you keep your head, so there ought not to be much worry about progress being locked off.

Mini games also return, of course. The hamster minigame from the previous game sees a kind of semi-reprisal in the form of the toy car. Again we need to guide our charge through a path, but this game is more about avoiding obstacles than how far we travel. Each one is immediately solvable as soon as you get it though, which is a pleasant change, and this particular brand of logic puzzle isn’t overly taxing. Each Layton game has at least one minigame where you need to pick up collectibles for solving puzzles and eventually put them into place to solve one grander conundrum, and in this game that is the picture book, which gives you hints as to what stickers go where in order to complete a story such that it makes sense. Finally, the parrot minigame has shades of mobile gaming to it, in that it’s a very simple mini-physics puzzler, but like mobile games it’s also quite addictive in its simplicity.

Professor Layton games have always looked good but there’s something noticeably better in Lost Future. There’s a wonderful sense of detail to each screen, and London is presented with a rich palette that makes each area pop with a tangible vibrancy. I don’t think it would be an exaggeration to call this one of the most beautiful games on the DS. It did strike me though that this game looks perhaps the least like a Layton game in some respects. Our setting is dingy and miserable and therefore it lacks the whimsical brightness that the series showcased in both Curious Village and Pandora’s Box; there’s certainly nothing like Dropstone or St. Mystere here. The character models are still unmistakably Layton however, and it’s a testament to the strength of the art direction that it never feels like it’s sacrificed its integrity or lost the spark that defined the series.

I’m really pleased with how graceful the Layton games have aged. As I’ve replayed them over these last few weeks I’ve found them a real joy to come back to; it’s even been long enough that I’d forgotten some of the plot twists. All three have a tendency to lose their grip a little at the end; Lost Future doesn’t break that tradition, and I think it could perhaps even be the point of most contention among those who play it. Personally I think it earns the ending, and I can forgive a little weirdness; chief among why I can forgive it though is because of the stark poignancy as the story wraps up. It’s impressive, for a puzzle game to tug at the heartstrings in the way Lost Future does, and it stands as a monument to how lovingly these games are made. Even if you’re not a puzzle game fan, as I’m not, I can still recommend the first Layton trilogy in general, and Lost Future specifically; beyond just being a fantastic game, I think Lost Future is probably among the best games on the DS.

As close to perfect as it gets, a game that surpasses any faults it might have and comes with the highest of recommendations. A must-play.