Given my less than stellar reaction to the first The Force Unleashed, you might question why on earth I opted to play the sequel. There’s having an open mind, of course, but The Force Unleashed II has a worse reputation than the first game, so what can be gained from playing it? Well, while The Force Unleashed II is still a bad game, I find it compelling to consider in what ways it goes wrong. Some of its flaws are comparable to its prequel, but it both manages to address a scant handful of issues which stood out in the first game while also providing us with its own unique problems to examine. 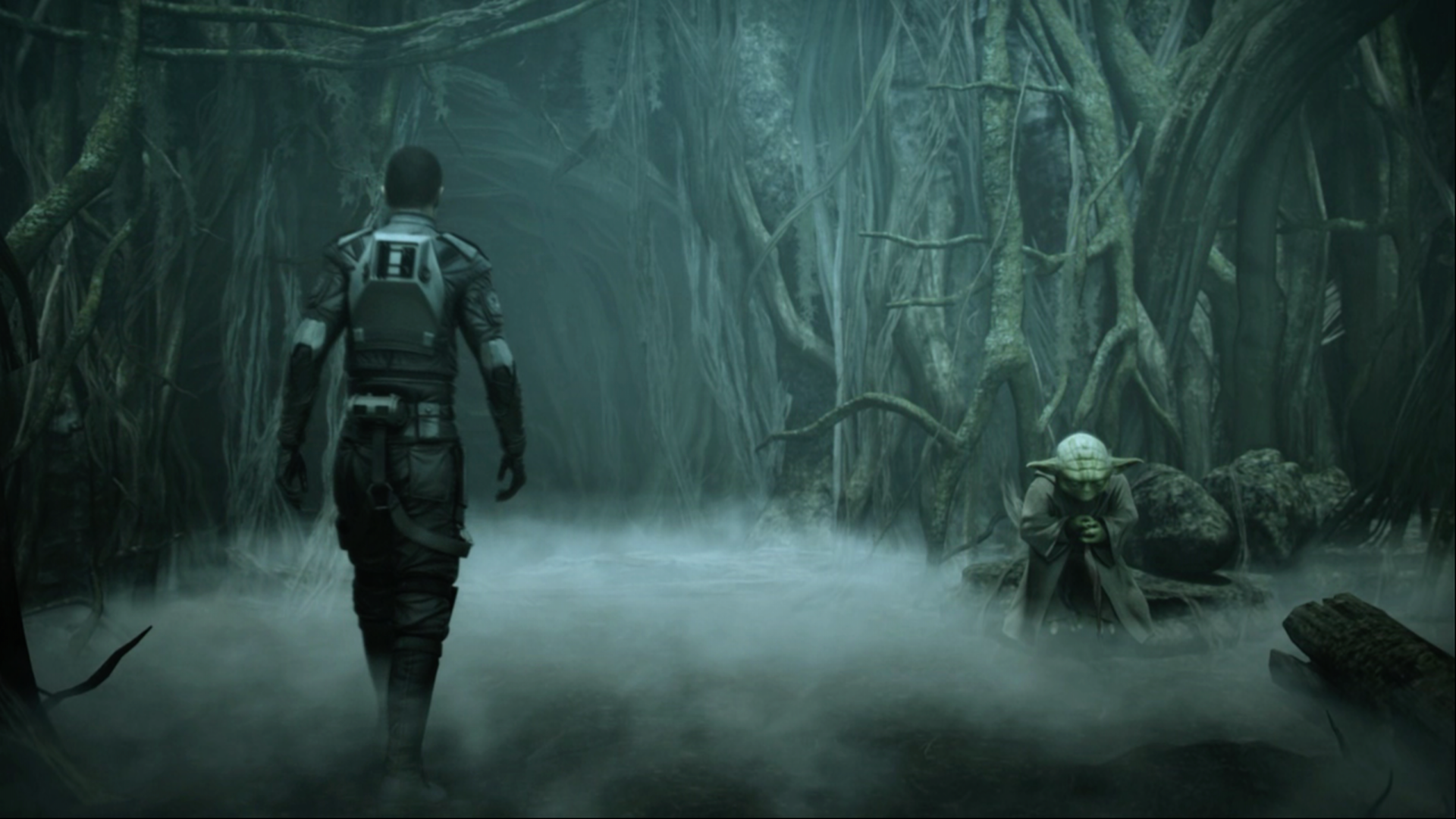 Okay, so one of the key complaints I had about the first game was that its writing was, to put it nicely, dreadful. Not only was the plot a mess, attempting to create an origin story for the Rebel Alliance that hinged on the intervention of Starkiller, Darth Vader’s secret apprentice who goes rogue and defects from the Empire, but it was also acted out with all the power and presence of cardboard. You’ll be pleased to learn that The Force Unleashed II continues in the ignoble efforts of the franchise to provide us with the galaxy’s most boring characters and adventures. If you’re hoping for any sense of tangible improvement in terms of the writing or dialogue I’m afraid you’ll be sorely disappointed; the cast still speak in the same dull tones and trite cliches that make gleaning even an inkling of fun impossible.

The actual narrative writing is just as bad as in the first game, but amazingly it’s bad in a different way. We’re going to have to touch on a few spoilers here for the first game so if that is a deal breaker, please do feel free to jump ahead a few paragraphs.

At the end of The Force Unleashed, Starkiller dies. He bites it hard, trying to go toe-to-toe with the Emperor, of all people. I talked about the annoying Mary Sue writing back in my review, and I think this finale is one of the great examples of it – of course Starkiller is so strong that we need a showdown with Sheev to stop him – but that’s also definitely Starkiller in these screenshots and on the box art for The Force Unleashed II. “But how can this be?” I hear you ask in the dull, tired tones of someone who can both no doubt guess the answer and also does not care. It’s clones, obviously, clones all the way down. Turns out, Vader was prepared for the eventuality of having to kill off his apprentice so he made sure to clone our protagonist. This raises the first question: why? We already know Vader is shit and being both a dad and a boss, but I’m not sure we’ve ever seen him do something quite as moronic as clone his incredibly powerful Force-wielding apprentice and expect the clone to obey him. This is compounded when, at the opening of the game, our clone experiences flashbacks and fixations of the previous game’s love interest, Juno, causing him to go mad, break out of his holding cell on Kamino, and leg it off-world in search of his beloved. Good thing no-one gave him a pair of lightsabers – oh wait, Vader did that too. 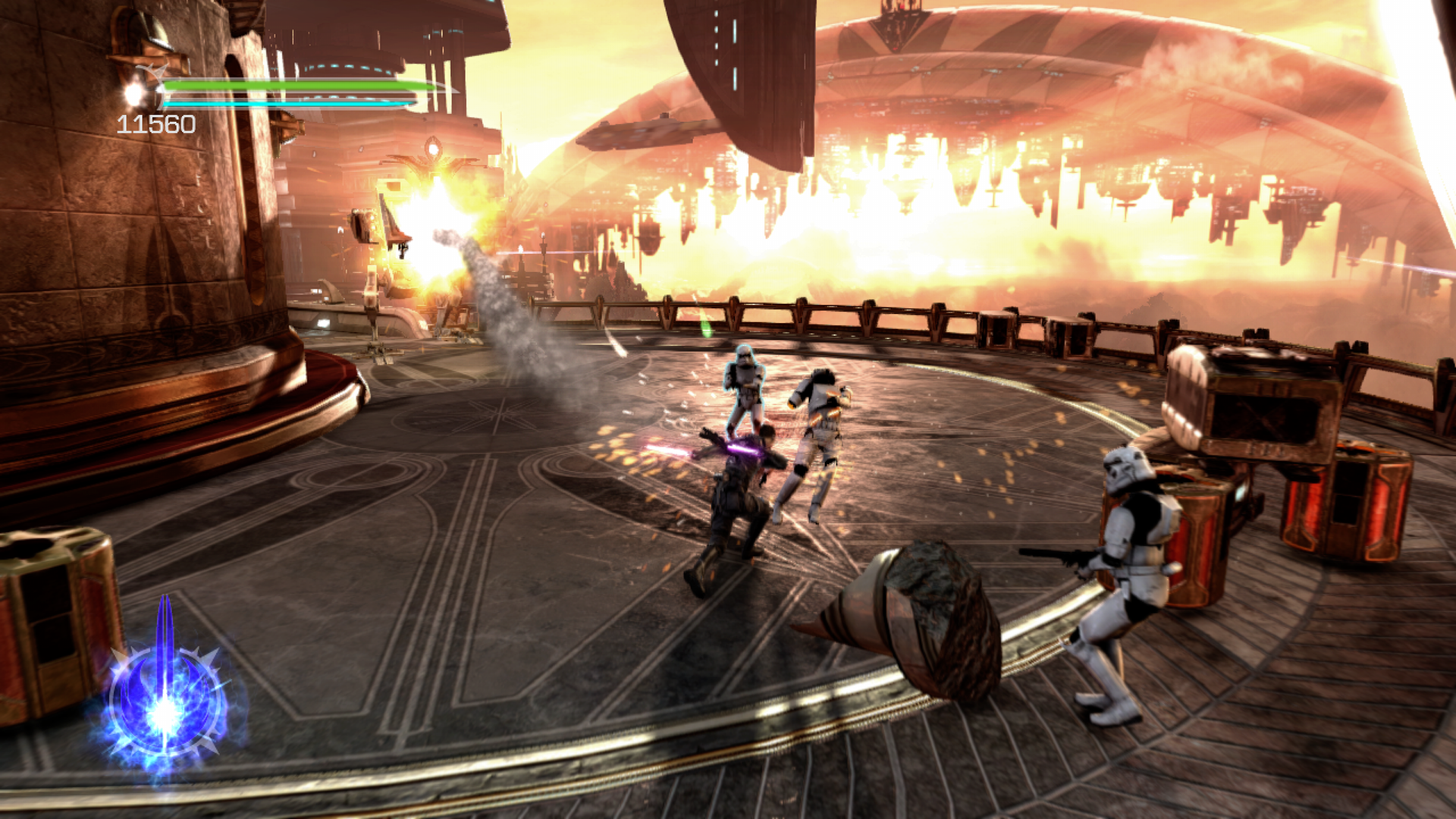 Cloning is obviously nothing new to Star Wars. We were introduced to the Clone Wars back in A New Hope before the clone armies of the Republic marched across our screens in the prequels, but it was also explored in the Expanded Universe. Timothy Zahn’s famous Thrawn trilogy (the original, and correct, sequel trilogy) featured the deranged clone Jedi Joruus C’baoth, and even a cloned version of the Emperor rose to terrorize the galaxy once again in the Dark Empire graphic novel. So the fact that The Force Unleashed II uses cloning is a well-established Star Wars factor, but what makes it more frustrating is the way it fails to make anything useful or engaging come from it. When it comes to action games I’m a big believer in not having to over-write things, and if The Force Unleashed Ii had taken this route and just said, “yep, he’s a clone, no biggie” then the story would have been marginally better. However, it tries to do something more, attempting to set up a mystery of whether this really is a clone, opr maybe it’s the original Starkiller revived. This kind of existential question should be a brilliant line to take; you can do throughlines of querying what makes us ‘original’, whether Starkiller memories are real, or whether his background is immaterial in the face of his actions. Unfortunately, the game pays these themes the most cursory lip-service at best, and brushes past the more complex and interesting themes.

It should come as no surprise then that The Force Unleashed Ii barely has characters, let alone treats them with respect. Starkiller, already a shell of a character, is reduced to an angry, snarling child. His reaction in every single instance is to scream for Juno, except during the game’s worthless 10-minute diversion to Dagobah, because of course he has to meet Yoda, and of course he has to go into the same dark cave as Luke and have a portentous vision. The treatment of Juno is also particularly bad. She didn’t have many lines or much personality in the prequel but she at least underwent an arc, and as she turned away from the Empire and tried to shake a Starkiller free of his slavish devotion to Vader. In this game however she is reduced solely to a macguffin, the epitome of damsel in distress, with her entire role in the story distilled down to being a memory that Starkiller chases and to get captured by Boba Fett and Vader. Even in the climax she barely gets any kind of lines at all. 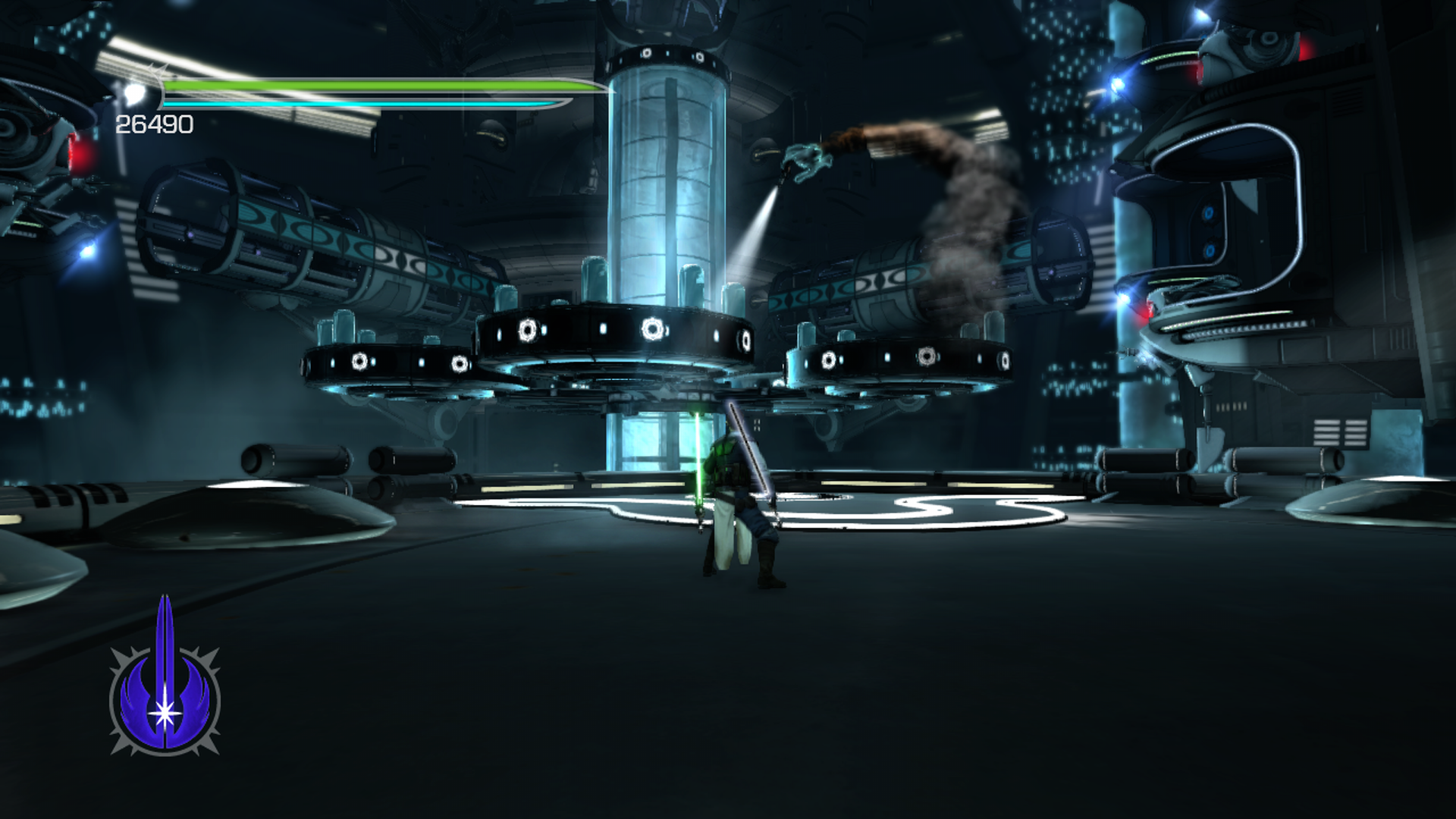 Given The Force Unleashed II continues the thread of rubbish writing started by its predecessor, it was a great surprise to me that the gameplay actually underwent some surface-level improvements. It’s not great by any stretch; in fact, it’s rife with problems, but this time those issues are a bit different and very, very marginally less severe than they were in the first game. Like its prequel it’s still a hack-and-slash focused on taking on waves of weaker enemies with the occasional harder mook or miniboss thrown in for good measure. The animation of Starkiller’s attacks are much smoother, making pulling off combos feel like less of a chore, and while the sabers are still glorified shiny toy bats, there’s been some effort made to make them act properly, with stormtroopers limbs often in danger of flying off. It sounds bloodthirsty but I do appreciate the accuracy, even if it’s not perfect. Beating enemies still rewards you with experience points, but this time the game visibly tracks them. A lot of depth has been lost in terms of upgrades; rather than the different skills and menus of the previous game, The Force Unleashed II merely lets you spend points to unlock one of 3 ranks on your powers. That said, the simplifying probably works in this game’s favour though.

Starkiller’s powers are more or less unchanged. You get a pretty typical gamut of Force push, lightning, and the game’s signature grip, although it feels much less is done with the 3D movement of Force grip this time as the environmental puzzles of the first game are more often replaced here by a higher density of tedious quick-time events. You have to get used to the shitty QTEs when you play The Force Unleashed II; every miniboss and boss encounter expects you to need them, but the poor enemy variety begets a poor QTE variety as well. Most of them consist of the same button sequences, so you can turn your mind off when they happen, only to get caught off guard when the game throws the one or two curveballs it has in its inventory. That’s probably one of the key problems at the core of The Force Unleashed II; the gameplay might have seen some tiny improvements but it’s still so boring as to lull you into a torpor. 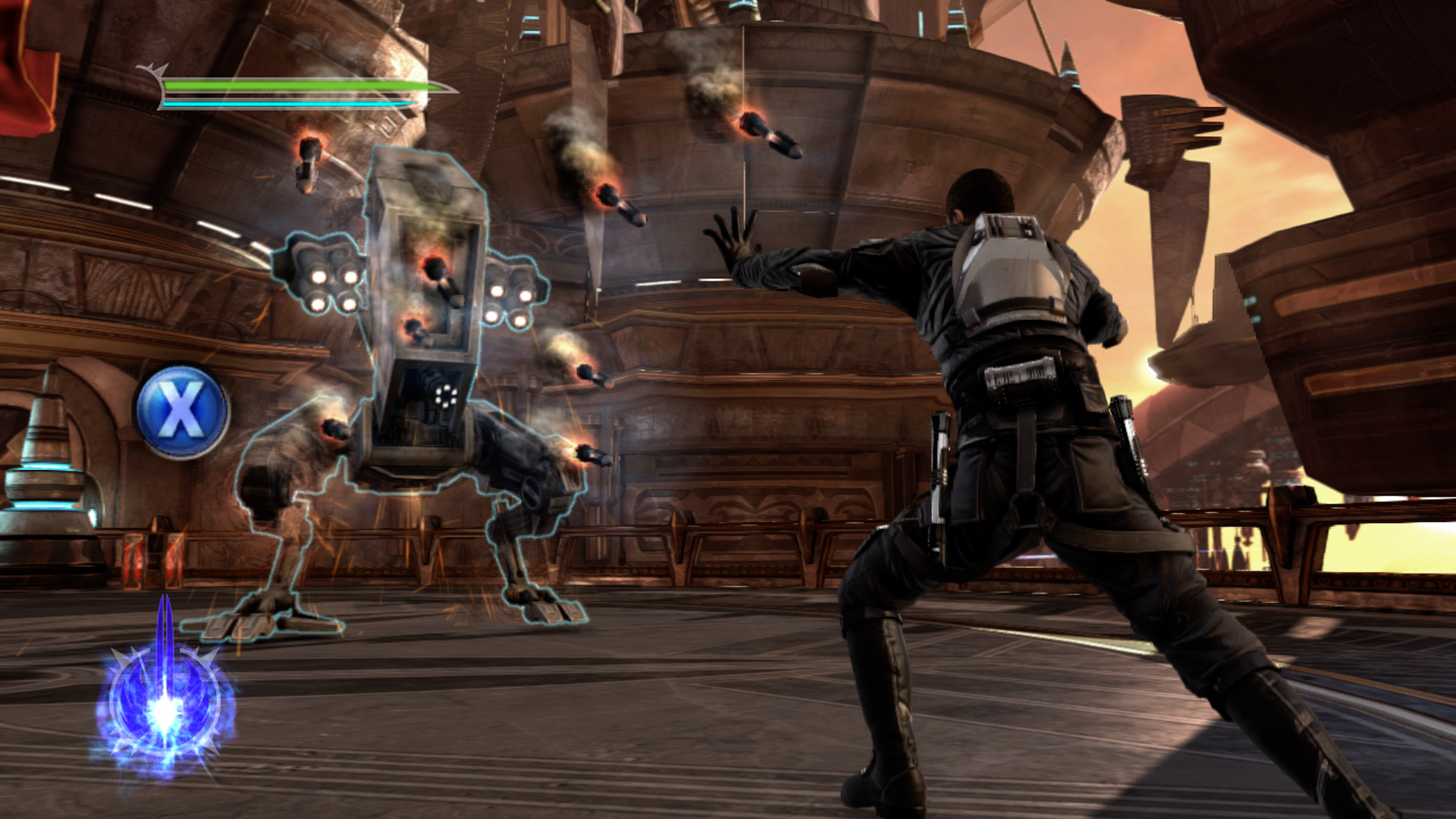 I hadn’t even gotten around to mentioning the incredibly lacklustre bosses, none of which inspire even the vaguest levels of fear, suspense, or excitement. In a game series which began on a foundation of fighting Jedi, it’s very galling to find oneself having to throw down against a gunship or a giant monster, as if it were any other kind of utterly generic action game. The frustration and tedium is worsened by the insultingly short length of the game and the repetition of the later levels. The level design definitely took a hit, with a much greater occurrence of fighting through the same corridors and rooms over and over again, and it’s especially dull when the final 2 stages (of a paltry 5 or 6) are merely spent trekking back through levels we’ve already seen. The fact that the game wants you to explore for the collection of hidden holocrons that give you either health or Force upgrades or customization options for your lightsaber should be a worthwhile draw but it’s a hollow means of trying to expand the pathetic runtime.

We never will know how The Force Unleashed was intended to conclude. The acquisition of Star Wars by Disney saw the new owners bring the years of Star Wars’’ Expanded Universe to an ignominious end, and included in that was The Force Unleashed. It’s clear that there were plans to continue it for at least one more game, but frankly even though the loss of the Expanded Universe cost us some phenomenal pieces of work, it’s easy to forget that it also cast out all the bad Star Wars content, and that, frankly, includes this short-lived series. Perhaps a potential 3rd release might have finally fixed the problems of the first and second games, but I doubt it. The foundations upon which it was built were just too poor.