As a general rule, I’m not one for combining gaming and shared socialization. I tend to be pretty solitary when it comes to games; chalk it up to a childhood of single-player titles. Clearly I enjoy writing about my experiences and spreading that around, but in truth it’s often done as an exercise in catharsis. I did, after all, start this blog up as a means of combating an overwhelming sense of declining mental health. That said, I’ve been part of various videogame-related communities over the years, and few have been as defining and important to me as the patientgamers subreddit and its associated discord server. On that server, for quite a long time now, there has been a regular game of the month event; two games each month, one long and one short, are picked for the community to play through and chat about, and it’s a longstanding regret and shame of mine that I’ve never interacted with it. However, July 2022 finally saw an end to that as Ghost Trick: Phantom Detective wound up getting selected as one of the two games. I figured that given DS games are easily accessible, and this was very clearly my kind of story-driven experience, why not finally get involved and give it a go? 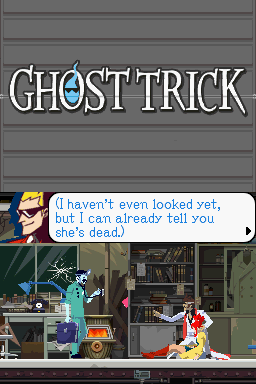 Just from the off, I have to say that Ghost Trick is based on an absolute home run concept. As the game opens you find yourself hovering over a corpse and you come to the swift realization that you must be a ghost. You’re unable to recall any of your past life’s memories however, and so our phantasmal protagonist (later named Sissel) sets off on a journey to try and find out how he died and why.

Of course, things are rarely that simple. Only a few minutes into this new existence of spectral sentience, Sissel witnesses a young woman run from nearby his corpse and be chased down and murdered by a shadowy hitman. Unfortunately for Sissel, this woman, Lynne, had been set to meet him in the junkyard that both of them find themselves now dead in, and with her death dies any hope of a lead in Sissel’s quest to restore his memory. 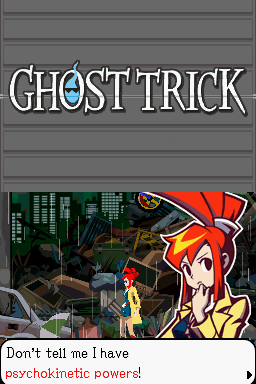 This leads us into our tutorial, and to the point at which Ghost Trick reveals the fantastic mechanical foundations it is built on. As a ghost – or perhaps, more accurately, a poltergeist – Sissel has the ability to possess inanimate objects and manipulate them, such as making a fan start blowing, or setting a wheel rolling. By pressing a button players can enter a kind of ‘ghost vision’, an overlay which highlights objects which Sissel can seize control of, and pressing each object on the touch screen gives a brief, one or two word description of how it can be utilized.

Sissel also has the power to reverse time, but it’s very limited. By possessing a corpse, Sissel can relive the last four minutes leading up to their death, but it’s not just a case of seeing how this person died. Sissel is free to move around and possess objects during this four minute window and so he decides to play hero a little. He needs Lynne alive since she’s the only lead he has relating to the mystery of who he was and how he died, so he takes the only logical course of action and acts to save her life and change her deadly fate. 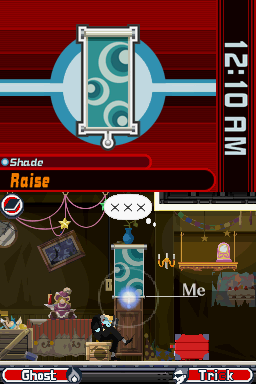 This is how many of the chapters play out in Ghost Trick. Sissel’s detective work leads him to someone vital in understanding his past and recovering his memories, but due to a grander conspiracy at play, they wind up dead. Sissel uses his powers to leap back in time to just before their deaths and then players race against a clock to try and prevent their death through possessing and manipulating objects around them, causing a cascade of events which, ideally, change their fate and save their life.

I love this concept! The entire process feels manic and tense; not only are you trying to figure out what the right combination of possessions and events are needed to cause some mad, elaborate means of preventing each person’s death, but the tension is kept high through a few carefully crafted means. The time limit, for example, will constantly remind you that you’re working against the clock with regular messages flashing up on the screen telling you time’s a-wasting or counting down the final seconds in big, bold numbers designed to distract you and ramp up the stress. Sissel also can’t just possess stuff as he pleases – he has a range of possession that’s quite short, so part of the puzzle typically involves engineering a scenario where a line of possessable objects fall into place, allowing Sissel to make his way across a room to where he actually needs to be and dealing with that as well as actually preventing the death at hand is such an effective, simple way of keeping players agitated and on their toes. 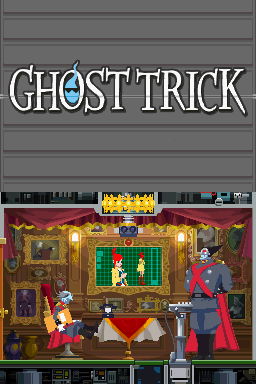 Of course it’s not all nail-biting tension and gripping your DS so tightly the casing starts to crack as you hurriedly try and race out the last few seconds of the clock in order to save a life because Ghost Trick understands how to balance narrative threat and player burnout. In between the timed bits of the game are marginally more sedate chapters where the goal is sometimes simple to change location. That’s easier said than done though; remember, Sissel can only move very short distances between objects he can possess. He can, however, travel down telephone lines to reach places that have been called from a specific phone, so in these quieter chapters the goal is almost invariably to reach a nearby phone and travel to the next place in Sissel’s investigation. Although the time pressure isn’t there, these are still pretty fun to work out – while I’ve said before that I’m not super into puzzle games, Ghost Trick largely manages to strike a great balance between tricky things to figure out and keeping it simple enough to be an enjoyable experience.

But it isn’t all rosy. Ghost Trick certainly comes highly recommended but I definitely had a few bugbears when I played it, and unfortunately a couple of them felt pretty significant. One issue that late in the story the game begins to break its own rules. One thing that’s established early on is that while it’s true that the time limit is counting down to a preventable death, if things do go wrong then it’s not the end of the world; ultimately Sissel can just rewind time again back to a checkpoint and you can have another go. It’s a smart facet to the puzzle-solving; while the tension is always there, the liberal checkpointing and always-available ability to rewind means that players are incentivized to try options out and turn back time if anything doesn’t quite work. However, in a chapter in the latter third, these rules are broken and instead the game locks progression behind what has been for the entirety of the game a failure state. This means that unless you accidentally let the time run out or (as I did) just let time run out in frustration, you’ll find yourself stuck as there’s absolutely no way to solve it without letting time run out. At no point prior to this has that been an option to progress, so even though it’s a simple, single rule-break, it’s still a frustrating choice in a game that, prior to this, has had a lot of very tightly-made design decisions. 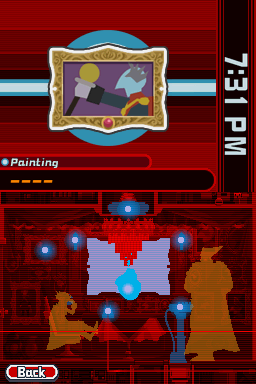 I also found the ending of Ghost Trick to be deeply unsatisfying. The game is written and directed by Shu Takami, whose work we’ve come across before on this blog as he also wrote and directed the first three Ace Attorney games. If there’s anything we can take from his work in those games it’s that he definitely has a predisposition towards the slightly zany, and if Ace Attorney is any guide then he presumably also enjoys setting up situations that seem broadly like they’re set in the real world before throwing in some wacky supernatural elements. In this regard, Ghost Trick fits the mould – it’s a detective story involving some grand conspiracy stuff, but it does obviously also involve ghosts – and it certainly also felt like it fit that same goofy feel as the early Ace Attorney games.

It’s also, for the vast majority of the game, a really well-told narrative. Its characters are all a bit bizarre, but the way in which the story unfolds doesn’t get lost in the eccentricity. There are enough bits of the wider conspiracy that seems to be behind everything to keep you interested, but on the smaller-scale level, Sissel’s journey is generally engaging, and his scrabbling attempts to recover his memories is quite a lot of fun. However, I feel like the game drops every ball it was holding by the end, and the final result is one of the messiest, deeply frustrating narrative resolutions I’ve had the misfortune to sit through. I’ve spoken to some friends who really enjoyed it and thought it was well-foreshadowed, but I couldn’t disagree more; I accept that some things could be seen as setting up the ending, but they feel flimsy at best to me. In general, I think the fundamental problem with Ghost Trick is that by the end it abandons any attempts to resolve the entire story and instead gets lost in throwing out a cascade of twists and surprises, entirely to the detriment of the narrative weight. 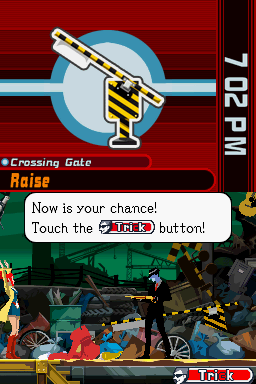 In theory, the problems I have with Ghost Trick are relatively minor; at most they are a brief handful of issues which basically only come into play during the final third. However, that’s one of the most important parts of the game, and ultimately, finishing the game without a fulfilling resolution left me feeling really annoyed. On the basis of that, I find it hard to recommend Ghost Trick, but that in turn frustrates me because the rest of the game leading up to that was fantastic. I suspect I’m an outlier, and that for many Ghost Trick will be a very fun, engaging, and unique game that deserves more attention.

4/7 – GOOD.
Sure, maybe something doesn’t quite work but at least it has heart, or a spark of excitement that makes it worthwhile despite the faults. Definitely worth a go if you can at least find it on sale.